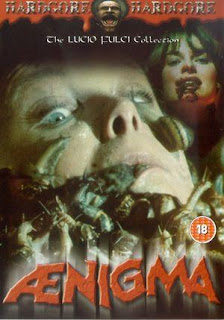 Would you look at that DVD cover for Lucio Fulci’s Aenigma? And they wonder why Italian horror hasn’t made it big in the UK. There’s just something about snails crawling all over a person’s lips that many people just don’t find very, well... appealing. Anyhoo, I certainly found the film itself pretty appealing, largely thanks to that hilarious Italian-to-English script translation that peps up many a Euro-horror outing. And Aenigma really takes some beating in that respect. Read on, slugface!

“Put on your make-up, your eyes are blue enough, tonight is special for you... You’re gonna see that dream come true...” So intones the delightful synth-pop number that opens this late entry in Fulci’s career. But if any dreams are coming true tonight, they certainly won’t be those of Kathy (played by Milijana Zirojevic), a bullied student at St. Mary’s College, Boston (played by the Yugoslavian countryside). Poor Kathy ends up under the wheels of a speeding car when a prank pulled by her classmates – in league with her not-terribly-professional gym teacher – goes tragically wrong.

Of course, Kathy’s still alive and, if not quite kicking, then at least comatose in a hospital bed surrounded by heart monitors (I counted at least three) and under the supervision of dishy Dr Anderson. From here, her spirit flies up out of her body to whoosh away over a model of the hospital and take possession of Eva, a new student just arriving at St. Mary’s. There’s barely time to unpack her collection of spandex bodystockings before Eva/Kathy is off on a vengeful supernatural killing spree (talk about getting off on the wrong foot!). And, before long, Kathy’s former frenemies are dying in all kinds of hilarious mysterious ways – including suffocation by snails whilst inexplicably paralysed; strangulation by one’s own reflection; and, most cruelly of all, terrorism via a poster of Tom Cruise... What an aenigma! as they say in Italy. Or possibly Yugoslavia. 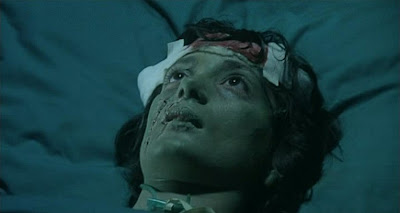 Lucio Fulci was that most paradoxical of things: a director who was as likely to copycat the latest trend in American cinema as he was to create something staggeringly original – often at the same time. Aenigma, however, finds him doing something he’d almost never be accused of anywhere else – namely, aping that other Italian fave, Dario Argento. It’s not just the girls’ school setting or telepathy-with-invertebrates plot thread (Phenomena anyone?) but the whole style of the thing – with its floaty camerawork and close-quarters bitching – that recalls Argento. (Although, to be fair, Dario never did quite match the pure Fulci-envisaged terror that is... snails! Snails on your face!)

Nevertheless, Fulci comes into his own here with a fantastic sequence set in an empty museum at midnight. Severed limbs fall from paintings, statues come to murderous life... you could almost be watching The House by the Cemetery (in fact, if you switch this off and swap DVDs, you really could be watching The House by the Cemetery, which might not be an entirely bad idea). The scene is classic Fulci, and by far the least goofy scare sequence in this relatively light-hearted piece.

In terms of sheer entertainment, however, the film simply flies by, feeling half the length of even some arguably better lesser Fulci efforts like Manhattan Baby. Its blend of eighties silliness and off-the-wall nastiness make Aenigma prime late-night viewing for Italian horror fans. As for the script, it’s rather aenchanting too. Here are some of my favouritest quotes:

OK, how did I just across this review now? I'm slacking.

I have a thing about Fulci, which I've talked about in-depth with anyone who will listen (as it is, I actually know a man who was great friends with Fulci and he appreciated this), so I'll spill here too...

I agree with what you said about Fulci being paradoxical (but I wouldn't use that word because it's way too big) but what I find most interesting about him and his films is that he inserts one terribly moving scene in each film (or at least the ones I've seen). For instance, in The Beyond there is that scene where the woman goes to the morgue and cuts the suit for her dead husband so she can lay it on top of him, or there's the scene in the horrible Voices from Beyond showing the medical crew pulling the equipment from the recently deceased man. In the Black Cat it's the scene with the young couple stuck in the boathouse thingy, dying from dehydration... They are holding each other's hands as they die. You get the point... Here it is the ending.

When the mother has to kill her daughter, by unplugging the machine.

It's so out of left field for a movie with Killer Snails.

That is why I find Fulci so frickin' fascinating. Where do these scenes come from and why can't he repeat them throughout the film? Weird. I do so love and miss him.

Jared Martin is the dishy doctor and I have a HUGE crush on him. Geez. He was so beautiful as Dusty on Dallas. Here he kind of just rolls his eyes around, but it looks GOOD!

Nice review Ross. I mean, have you ever written a bad one? You should try that! I bet you couldn't!

That's SO intersting about Fulci's out-of-place "moving" scenes... I hadn't thought about it before but you are, of course, spot on with your observation. It's something I'll probably always have in mind whenever I watch a Fulci film from now on.

I will have to find my friend's blog (the one who knew Fulci) and post the link here. There is this review where he goes still by still of some really profound moment in a Fulci film.

HA! I should have looked for it FIRST! Sorry for so many comments on your posts.

Here is the article in particular (it's about Don't Torture a Duckling):

That is one strange yet utterly fascinating blog...

A great, enjoyable review of a middling Fulci film.
I used to own a German DVD of it and for years watched it without realising it was cut. Yes, FSK found something to trim(the snails scene) even in "gore-lite" "Aenigma"!
Personally I do prefer "Manhattan Baby" to "Aenigma" because it's totally unconventional and surreal.
And it doesn't have the dreadful "Head over Heels" song.

Thanks, Alex. I think I'd rate Manhattan Baby and Aenigma fairly equally. Baby is more dream-like, powerful and interesting, but Aenigma is just so out-and-out entertaining... It's hard to choose between them!

Yeah, neither is a true full-on masterpiece but I rewatch both rather often.
Still, "Aenigma" has some rather shoddy camerawork, with very obvious camera shadow on the walls in some scenes, which kind of foreshadows the nearly total technical incompetence of 1990's "Demonia"...
So I'd say "Manhattan Baby" is more competent, plus it features the excellent Cosimo Cinieri as the creepy medium...