Kicking against the pricks

Toby Wilkins knows a thing or two about visual effects, having been in the business for the last ten years, and his first feature film as director bears this out. You can see the proof there on the cover of Splinter: he’s created “the year’s best beast”, according to LA Weekly. And, you know, I’m not going to argue. Splinter’s figure-skating fusion of amalgamated body parts is downright horrific and perfectly realized (I know because I watched the special feature on the DVD and they way they brought it to life really is clever).

Wilkins himself is British, which may explain why we got Splinter on DVD a few weeks ago, while it’s only out in the US today. As a low-budget monster movie, it’s pretty fantastic. The creature’s great, the story works, there’s loads of gore, and the characters’ actions are fairly reasonable. In fact, if there is a flaw, it’s that there aren’t enough characters. We’re more used to seeing superfluous extras picked off left, right and centre, whereas the action here centres almost entirely around three people trapped inside a gas station convenience store. But don’t be put off by the location – there’s plenty of exciting stuff going on (none of which involves beef jerky or porn mags) and when characters meet their ends, they do so in spectacularly nasty fashion.

That’s the US DVD on the left above, with the UK release to the right... One-nil to us Britishers, I say. Give Splinter a go.
Posted by Ross Horsley at 22:45 3 comments:

There’s backwoods, and then there’s backwoods. And, by the latter, I mean 1970s Norway... Is there anyplace worse to find yourself in a slasher movie? Manhunt, known as Rovdyr in its home country, sets out to answer this question – and does so with a decent amount of gory panache but nothing in the way of originality.

That surprised me, actually. My most recent encounter with Scandinavian cinema was the blindingly unique Let the Right One In, which does things to the teen-vampire genre that would make an Eastern European hooker blush. And, before that, there was Cold Prey: also Scandinavian, also snowy, also bloody brilliant. Manhunt doesn’t have the snow. Nor the brilliance.

It’s 1974, the year of The Texas Chain Saw Massacre, but Tobe Hooper’s film obviously hasn’t made it as far as Norway yet because the four teenage protagonists of Manhunt don’t seem to realize it’s not really a good idea to drive somewhere remote in a camper van, make fun of the locals, and pick up a half-crazy hitchhiker. Pretty soon, the hitchhiker is dead, one of the teens is dead (shotgunned graphically in the heel, and then – oops – the head) and the survivors are on the run from some scruffy, possibly inbred hunters who prefer human prey to woodland wildlife.

That’s pretty much where the TCM referencing stops and, unfortunately, the story along with it. Manhunt offers nothing else beyond running and hiding in the woods for the rest of its scant, 75-minute running time. We never get to understand, or even meet, the killers in any detail, there aren’t any actual set pieces (like Wrong Turn’s masterful keyhole, treetop or waterfall sequences) and it’s not even particularly suspenseful. But then, I wasn’t bored, either... Damn you, Manhunt! You should be a pointless retread but there’s something – something! – about you that keeps you interesting. I’ll be damned if I know what it is, though.

Quite simply, there’s no justice: the use of The Texas Chain Saw Massacre goes way beyond a simple jumping-off point for Mannunt. It’s more like a straight remake-cum-rip-off, only without the second half. Sorta like this: 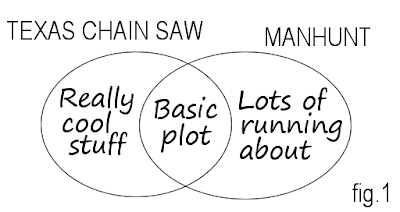 Is it really feasible, however, that someone would virtually remake a 35-year-old film and not only fall far short in comparison, but also chuck out all the accumulated slasher learnings of the past three decades? Manhunt does nothing new. It doesn’t even try to do anything new, except set itself in Norway.

Speaking of which, I think I’ll remake Halloween and set it in the Maldives. That Michael Myers could really use a nice tan.

Put your hands up

If you’re in any way interested in the development of the slasher genre and haven’t yet read Snake Oil’s Proto-Slashers take on Hands of the Ripper, get yourself over to the Retro Slashers Blog and have a gander, as they say in period London. The 1971 Hammer horror is the latest in Snake Oil’s fascinating look at the films that paved the way for the modern slasher, and if this appetizing review doesn’t have you gagging to see it... YOU’RE ALREADY DEAD! Or something.

I’ve also just discovered there’s a special edition DVD available, at least in the UK. (That’s the cover above, see?) Yes, for once, we Brits get the, er, longer end of the stick, the one without the poop on it.
Previous previews in the Proto-Slashers series (and try saying that in a hurry) include: Francis Ford Coppola’s Dementia 13 (1963), the PG-rated sickie Blood and Lace (1971), and the British babysitter-in-peril movie Fright (also 1971... What made the world so angry that year?).
Posted by Ross Horsley at 08:14 1 comment: