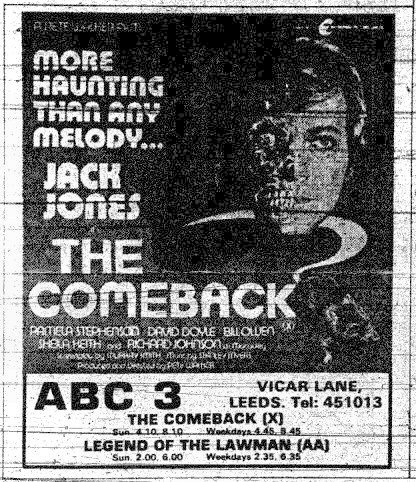 There’s something about 1982’s The Thing (rating 4/5) that affects me now in ways that failed to grab me back when I first encountered it as a teenager. It’s a cold, draughty and dragging film. It’s sludgy, unforgiving and a bit of an effort. It’s, well... brilliant, really. If you never thought a monster movie could feel in any way realistic, this one’ll leave you sprawled face-down in the ice. I’ve heard that winter crews at Antarctic outposts watch it when all the home flights have left for civilization. That’s pretty brave! We’re talking about a film where the only comic relief is the borderline hysteria brought on by its ever more extreme and disgusting developments. Kurt Russell is incredible in it, delivering a performance that’s 87% beard and cowboy hat, but which somehow holds the whole thing together. Not that it’s in danger of falling apart: the idea’s neat, the script solid, and John Carpenter’s direction note-perfect in its mixture of chilly observation and steaming relish. You’ll probably have questions afterwards, but that’s one of its strengths. It’s a film that encourages debate; that wants you to work at it and pick it apart. And then it wants you to puke.

The new The Thing (3/5) slavishly fills in the backstory of Carpenter’s original, attempting to explain how each snowmobile came to be standing in which particular snow-covered parking spot of that abandoned Norwegian base; how each individual icicle formed on each particular overhang; and many other thrilling enigmas barely worth wasting another semicolon on. One thing it doesn’t explain is why the Thing itself – formerly an unutterably squelchy dollop of melted face and hyperactive spaghetti – is now a smooth, shiny digital effect that never stands still long enough to let you get a decent look at it. Neither does it explain why the Thing doesn’t just give all that mutating a rest for, like, five minutes and pass itself off as a dog long enough to escape triumphantly into the wilderness like a more evil Littlest Hobo... Hey, Miss Thing, I found myself thinking in a sassy voice, just rent Invasion of the Body Snatchers if you want to see how a self-replicating pod-person really gets shit done!

All of which got me wondering why this Thing had to be called “The Thing” again, when even “The Thing Again” would’ve been a better title. This is, after all, a proper prequel rather than a remake – a touch of mild novelty surely worth pointing out by way of a more imaginative title. I suggest The New Thing... Oh no, that’s wrong. Technically, it’s The Old Thing... although that makes it sound like the original film again. How about Before the Thing? First Things First? The Thing-ummy? Baby Thing? That Thing You Do? (Hmm, maybe The Thing wasn’t such a bad title, after all...)

It’s not a bad film, either, being enjoyable in the manner of a Resident Evil movie, and challenging us to accept Mary Elizabeth Winstead as a leading 1980s palaeontologist in a way that’s so serenely audacious it’s actually entertaining in itself. As a monster movie, it’ll likely be as much of a relic as The Relic in ten years’ time, having had as much deep impact on the sci-fi genre as, er Deep Impact. But, if the worst it does is drive you back into the squiggly arms of the original Thing, then that’s no bad thing. (Hmm... The Bad Thing? No... stop that now!)

Let’s turn our attention instead to Seconds Apart (2/5), a sort of telekinetic torture-porn slasher movie that weds Carrie and Willard in ways that make less sense than this sentence. The film features Edmund and Gary Entin as twins – both evil, both psychic, and both able to command other people to kill themselves against their will – and Orlando Jones as a detective who’s scarred both physically and mentally after leaving his wife to frazzle in a house fire. Said detective is investigating said twins following a spate of suspicious suicides, while said backstory allows flashbacks that pad out the running time.

Yes, Seconds Apart has interesting ideas but fails to do anything very appealing with them. Its idea of style could be described as “tones of decay and some stuff with a snowglobe” – which is probably a direct quote from the script. What it really could’ve done with is the colourful, black-humoured histrionics of a Tim Burton rip-off like the aforementioned Willard (and I believe that may be the first time Willard has ever been aforementioned) or May. Or an actual Tim Burton film like Edward Scissorhands. Or perhaps any film that takes its title from the name of its main character, with the possible exception of Rocky.