Next house on the left 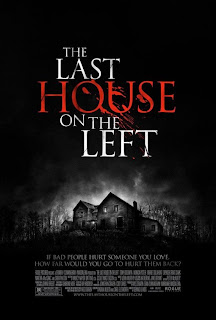 Because I generally like films about rape and murder – and because, as we all know, remakes are always just great – I decided to rush out and give the new Last House on the Left a try on its UK opening day. So I sat there in the dark with about eight strangers – some of whom gasped at the graphic stabbings, sexual assaults and miscellaneous mutilations – and thought: Why am I doing this? Am I sick? But you know what? This film is just great. And I’m not sick, I assure you... Although I guess I would say that.

I’m a fan of Wes Craven’s original. What horror fan isn’t? It’s not perfect (I’m sure you’ll have your own reasons – possibly several – as to why) and Craven would come on leaps and bounds as a filmmaker throughout the rest of the 70s, but it works by succeeding at everything it’s trying to do and, crucially, horrifying the hell out of you three decades on.

The new Last House actually smoothes out a lot of these imperfections both plot-wise and stylistically. Which isn’t to say it’s a superior film; I think the original holds its own just because it got there first. But it certainly doesn’t insult the original, unlike many a recent remake, and it stands alone in a way the Friday the 13th and Halloween remakes don’t.

Quality films about rape and murder are usually foreign, and sometimes quite boring and pretentious. The Last House on the Left is certainly quality – it’s got a lush, orchestral score, beautiful cinematography and a capable cast – and it drags you in on the weight of your own gloomy expectations that its initial idyll can’t last. Of course bad things are going to happen to its teenage protagonists, although I can’t say whether or not you’ll find them more disturbing that those in the original (I found them less so – just slightly – thanks to the high production values and reduced sense of humiliation).

Pretentious it definitely isn’t, however. While it’s sensible enough to make you believe it, it’s also plenty pulpy when you just want that revenge-kick. It doesn’t pussy-foot, but it’s not tactless either. By dishing out dollops of nasty mayhem in its final third it does what Funny Games (the original and remake) denies – that is, allows you to wallow in the horror. After all, it’s a horror movie. It’s supposed to be chock-full of horrible, and it’s supposed to be a cathartic experience... In fact, now that I’ve seen the new Last House, I think I’ll be able to get through the next three weeks without kicking a single kitten.

Bad day at the office?

Some recent gallivanting around Europe has put me in possession of a couple of obscure horror films with a workplace theme. But without visiting the IMDb and spoiling all the fun, I know next to nothing about either, other than what’s written (in Dutch) on the DVD covers... 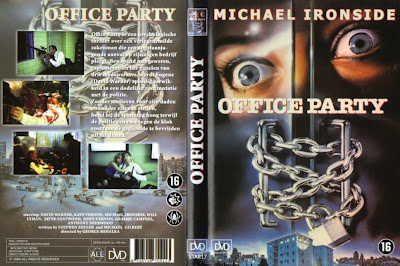 First up, there’s Office Party, a “psychologische thriller” starring Michael Ironside and David Warner, one of whom appears to be wearing a scary mask in the stills on the box. While Ironside is touted on the front cover, however, it’s Warner who’s mentioned in the plot description on the back, so I can’t really tell which is the hero. I’m guessing it’s Warner because his character appears to be called Eugene, and I can’t imagine a masked killer going by that name (oh, how quickly we forget Eric’s Revenge). From the looks of things, I’m thinking Eugene and his co-workers are trapped inside an office building by a deranged murderer and must fight to survive the night! 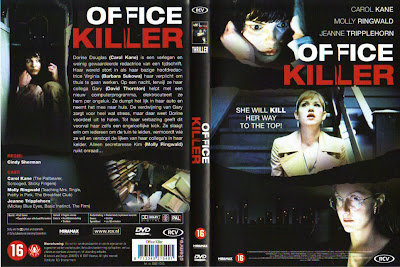 Then there’s Office Killer, which – joy of joys – stars Carol Kane. Judging by the cover (a dubious practice, I hear) she’s in mousy mode, but don’t be fooled, as “she will kill her way to the top!” apparently... Just like Michael Caine in A Shock to the System, perhaps? Quite frankly, I’ll be happy enough if this is simply better than the disappointing The Temp, which it also appears to resemble. But I can’t get enough of stationery-item-related violence at the moment (Drag Me to Hell’s stapler and ruler antics had me in fits) so, if Carol gets handy with a letter opener – or even just a few paperclips – I’ll be pleased as (a hole) punch.

I’ll be scheduling Office Party and Office Killer for their performance appraisals just as soon as I find a free slot in my Filofax.
Posted by Ross Horsley at 23:30 6 comments: