Don’t joke! If not quite my only post this year, this is certainly my first in over a month. And I feel bad about that, I really do. I could write a list of excuses, I could tell you how busy I am with my other blog, My First Dictionary, I could ’splain it all to you over croissants and a mint julep, but I sense none of those would do any good anyhow. And pastry with cocktails is never a good idea. 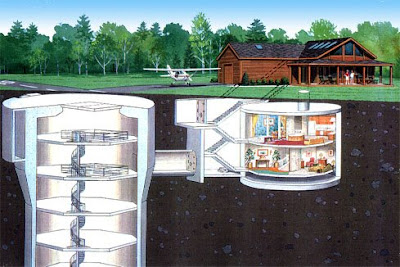 A bunker like that from which I emerged today

Perhaps the main reason I’ve not been updating recently is that I simply haven’t watched anything in an AiP vein to write about. I’ve hardly watched any films at all, in fact, since I last reviewed the new Last House on the Left a few weeks back, although the ones I have seen (Gran Torino, Bolt, Harry Potter and the Half-Blood Prince) – mainstream as they are – have all been quite good. There’s also been Abbott and Costello Meet the Killer, Boris Karloff, which I hope to write about here shortly (because it’s really quite interesting, y’know) and something called Red Mist. 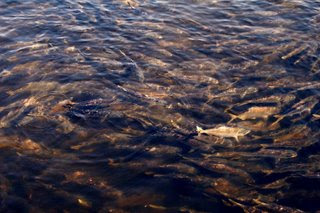 Bunker fish. I saw lots of these in my bunker.
What about the stuff I haven’t done? Well, I’m mad, mad, mad, MAD with myself for missing the submission deadline for Vince Liaguno’s mouth-watering upcoming slasher book, Butcher Knives & Body Counts. Not that I expect to have had anything accepted but – damn – it would’ve been worth it to get the chance to have something included in the kind of good company that’s been announced so far.

And, speaking of good company, I happen to know that super-scribe Amanda By Night is working on something pretty special at the moment, which she asked me to be a part of but which I’ve unforgivably neglected of late. Let’s see if I can get back on track a bit and enable her to get it finished before AiP’s next annual post.

In the meantime, I highly recommend becoming a follower of Tower Farm Reviews, in my opinion the natural successor to Anchorwoman In Peril, where Billy and JM have an uncanny knack of picking the movies I keep meaning to be review... Seriously, can you think of any other site that could segue effortlessly from Ticks to Roller Boogie in the space of a few reviews? I rest my case (and hopefully not on your foot).

*No guarantee of intermittent reader-writer reunion is implied or should be inferred.
Posted by Ross Horsley at 11:23 3 comments: