Slaughter High is a slasher that goes straight down the middle. It’s not great, it’s not crappy and, when I watched it, I forgot why I supposedly like slashers so much in the first place. In fact, I felt like any normal person watching a slasher. I was mildly entertained, yet I was unmoved. I felt no affection towards the genre, nor any great loathing of it. I wondered why I wasn’t watching something with more famous people in it. Or any famous people. Or some explosions. It was weeeeeird.

The movie itself hasn’t been put together with any great thought. It starts with a prank that goes predictably wrong... Well, I say “predictably” but I’m not sure if anyone who hasn’t seen this would be able to imagine how said prank goes from humiliating the school nerd in the locker room to said nerd having his face blown off by an exploding jar of nitric acid. I guess It’s just another sad incidence of violence in our schools... 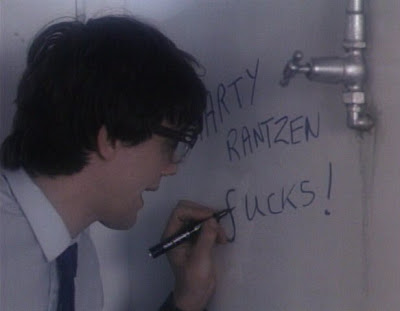 Anyway, the nerd is Marty (Simon Scuddamore) and he’s not particularly likeable, which might be detrimental to the plot if this were a straightforward tale of feelgood revenge (but it’s not). His taunting classmates aren’t especially appealing, either, although they do eventually become tolerable simply due to the fact that the film spends most of its time with them. Where? Back in the school, five years on from graduation, where the guilty gang have arrived to celebrate their reunion. Funny thing is: no one else from the Class of Nineteen-Eighty-Whenever has turned up. It’s just them. The school’s been closed down but their lockers are still there, and each contains an item they thought they’d lost long ago. Spooky, huh?

Faced with a desolate, cobweb-strewn building, some creepy props and no one around, you’d think the teens would blow the joint and find somewhere worth partying in, but they stay to down a few beers – a plan that quickly goes awry when one of their number drinks from an acid-spiked can and finds his intestines bursting from his stomach with the projectile force of the creature from Alien. Most of the teens flee – only to find the doors and windows blocked by electric fencing – while one decides to take a bath, naturally, in the school’s, um... student bathtub? Again, not a good plan, in any case, as acid comes churning out of the mixer tap and bath-girl promptly dissolves like a giant Alka-Seltzer®. 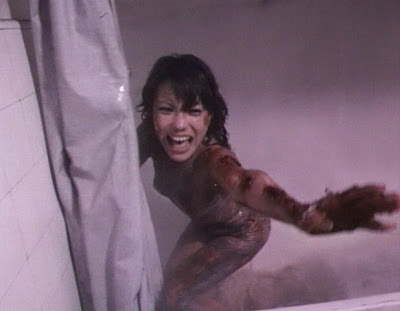 An acid-base slasher, then? Nope. I think that’s it for the chemistry-related killings, although the remaining death scenes are fairly memorable, especially one involving electrocution and dirty talk. It’s not that Slaughter High doesn’t try. It just doesn’t seem to impress. That’s even more surprising when you take into account the climactic chase scenes, which I have to admit are quite brilliantly filmed using a Steadicam. It’s a great technique, and it throws you right into the action... but, again, you probably won’t care enough to get too worked up.

Until recently, Slaughter High was considered something of a lost slasher, having had no DVD release and drifting about in rated and unrated versions on video in the US, and a heavily cut version in the UK. Lionsgate’s new DVD puts out when it comes to being uncut, but is also the most blatant case of poor-quality VHS transferred straight to disc I think I’ve ever seen from a reputable distributor. Now, I wouldn’t have minded at all if I’d been watching on video, but I wasn’t, and that sucked. It’s distracting, disappointing and reeks of cutting corners to cut costs.

On the other hand, the disc’s trivia track invaluably informed me that, when one character donned a hockey mask, it was a tribute to Friday the 13th. Not a total waste then.

I have not shame in the fact that I absolutely love this movie. Adore. It's awesome.

It's so awesome, all it needed was a shark so I could say it was Jawsome!

The "American" kids (who are all about 30 or older) have British accents (except maybe Marty who I think was American and the chick who played Stella - my god, I love her!), and when the Asian girl yells, "Let's Party!" well, it's its own kind of amazing.

I always tell Harry Manfredini that I love this soundtrack whenever I see him around (which I do from time to time). He gets the BIGGEST kick out of it. He's really nice, and so now I love the movie more.

Caroline was married to one of the producers at the time, I believe (or maybe the director? I can't remember). She ended up in a lot of weird movies because of her marriages (she was married to someone involved in The Last Horror Movie too). Gotta love that chick. She's hot, even if she's pushing 40 and playing 23.

And did you love the Pieces poster in the movie?

Gawd, how I loved this movie and missed you, my favorite Anchorwoman in Peril!

Oh Amanda, how is it that you pack more interesting tidbits into your comment than I do in my entire review?!

I *DID* love the music, incidentally, especially that "meowing cat" pop theme (Pawsome!). It's a fun flick alright, but there isn't a hint of scariness. I've got Doom Asylum lined up to watch next, and I'm expecting more of the same...

I think Pawsome might be the best made up word ever.

And I agree, it's not scary. But it is so odd, I just can't stop myself from watching it once a year.

Recently reviewed this on our site, and I totally agree with you. I rushed out to buy this on DVD...and came away totally apathetic. Although I do love Caroline Munro's big white sheet/outfit.

I can't believe I never heard of this movie. I immediately had to NetFlix it and I had the best time watching this movie. Stoned out of my mind but still it was so bad in the very best way.

Wow! I immediately went over to YouTube and checked this out, absolutely the best type of bad, thanks so much for the 'recommendation'. My heart did a little leap of joy when Terry from Emmerdale rolled in. I love the fake America of it all, and the knowing post-ironic mind set of todays movie going society saddens me a little that no one would try that now! It had such a feeling of 'Ah, what the hell, lets just do it anyway' that i couldn't help but get caught up!

Too true, Nik... Incidentally, does anyone know why this movie is stuffed full of Brits? It just seems so unlikely...

It was shot in Britain, hence all of the British actors. The producers also were behind "Pieces" and "Don't Open 'Til Christmas".

Part of the films lore is that the actor who played the tormented, revenge seeking nerd, killed himself shortly after the film was released in 1984. It was his first film, he was 28.

On a lighter note, the "teenagers" were obviously being played by 30 something actors. The soundtrack was incredibly good cheese!