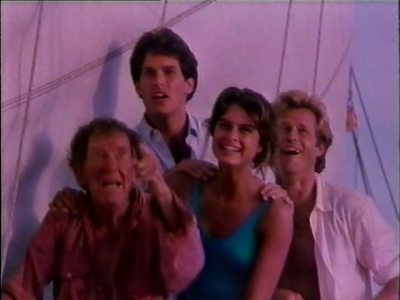 Does DVD picture quality reflect the quality of a film? I’ve often wondered, but no more so than when I got about halfway through Wet Gold, a 1984 TV movie that tries to do for underwater adventure stories what The Deep did for underwater adventure stories. And fails. (I’d like to say “spectacularly” but putting that word anywhere near a review of this film would be misleading.)

So, anyway, the DVD’s picture quality – if you can call it that – is not good, but that’s not always a problem. A bigger one for Wet Gold is the fact that it very quickly descends into a quagmire of dull double-crossing between people you care very little about. There’s Brooke Shields as a Florida waitress who dreams of bigger things (shame she turns out to be so lazy and self-centred, then); Burgess Meredith as a drunken seadog who knows the location of a fortune in sunken gold; and Thomas Byrd and Brian Kerwin as the deckhand and diver competing for Shields’ affections.

The four of them head out to sea, they find the treasure, they see a SHARK! (at this point, I thought things were going to get interesting... alas not) and they have a run-in with some pirates. But mostly they go skin-diving and argue about their shares in the loot. It’s all quite dreary, really, although there is a nice moment involving the underside of a boat and the topside of a character’s skull that redefines the term “propellerhead”.

I’m easy to please when it comes to underwater action movies. There simply aren’t enough of them (unless you count submarine flicks, which to me are as interesting as films set in warehouses) but Wet Gold isn’t a good example of one, despite some decent scenes inside a sunken shipwreck. If you’re looking for a schlocky oceanic crime story along the lines of The Deep and Into the Blue, try Shark or Night of the Sharks instead. This one sunk without trace for a reason.

Brian Kerwin is on my soap, One Life to Live, and was on Sheriff Lobo. Despite the fact that we know it sucks, I have to see this! :)