Boy, it’s just amazing what you’ll get up to in your efforts to put off doing something you don’t want to do, isn’t it? Namely, avoiding working on the book you’re writing, which is the reason you haven’t updated your blog for 64 million years, give or take a century. So here I am with a little look at Dean Koontz’s Intensity. Yup, not only have I sought out a three-hour TV movie to watch, but now I’m actually writing about it... Can you say “procrastination”? Of course you can! But can you spell it? Ha!

Things got so bad on the putting-off-work front today that, besides shampooing my carpets with Head & Shoulders – surprisingly tough on rug dandruff – I also managed to watch a Mary Higgins Clark TV movie... you know, the kind where a woman’s kidnapped, her fretful friend falls in love with the detective, something explodes (probably a yacht) and you wish you’d watched a proper thriller instead. The one I picked was For Better or for Worse, aka Terror Stalks the Class Reunion (now you see why I gave it a go) and you can read my review over at Retro Slashers... But hold your horses there, pardner! I haven’t even started this review yet! 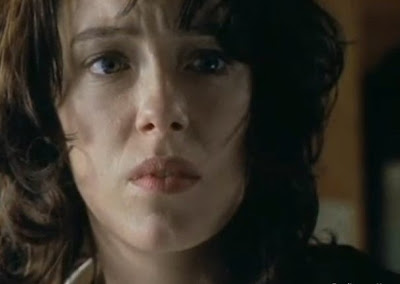 Funnily enough, Intensity is also about a kidnap but, believe me, it’s a whole lot better than the Mary Higgins Clark outing. The clues are in the titles. Where For Better or for Worse has little of the former but lots of the latter, Intensity lives up to its name with a smattering of prolonged suspense sequences and a running time that, far from dragging everything out, actually gives it the feel of a decent novel. (This is probably the part where Dean Koontz fans point out that that’s because it’s based on one.)

And – oh – Intensity... there’s another reason you’re interesting, and that’s down to the fact that you’re basically a blueprint for the 2003 French horror film Haute Tension/Switchblade Romance. (This sent the blogging world into a frenzy seven years ago, so I’ll let you do your own Google search.) Haute Tension is basically the jacked-up, hyper-gory, streamlined version, and a safer bet for horror fans, I guess, but taking the trip with Intensity is well worth the ride too.

What are you in for if you do? Well, Molly Parker stars as an emotionally damaged waitress called Chyna, who can’t flip an egg without having a disturbing flashback of her awful childhood, in which she was apparently raised by Mickey and Mallory Knox whilst being pursued by a camera mounted on the back of a bee with balance problems. Chyna is visiting the family of her friend, Laura, at Thanksgiving when a serial killer played by Scrubs’ John C. McGinley (slightly distracting) breaks in and kills everyone... Everyone, that is, except for Laura, whom he decides to tie up and kidnap, and Chyna, who sneaks undetected into the back of the killer’s getaway vehicle (a mobile home) and tries to think of a way of freeing Laura without getting captured and killed herself. 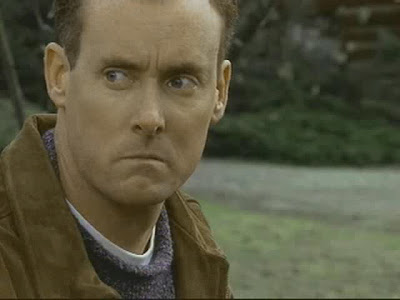 The whole home-invasion is a great piece of sustained tension, as is almost every ensuing scrape Chyna manages to get herself into, from dodging the killer during a blood-splattered stopover at a gas station, to mounting an escape from the his home past a pack of hungry guard dogs. Piper Laurie pops up as a motorist dragged into the chase, and there’s also the small matter of a kidnapped child who needs rescuing from the monster’s lair. If it’s woman-in-peril thrills you’re after, you can’t go wrong with this one, really. It’s twice as suspenseful as most similar offerings, not to mention twice as long.

Hey man, so glad to see you're still with us! Been gazing at Kenny everetts bearded fizzog on a daily basis for many a moon now waiting for an update. I started with intensity when I missed Switchblades UK ciema run and heard of the 'similarities'. Unfortunately, despite the presence of McGinley, the overall run time combined with the lateness of evening found me calling quits on it convinced it would be on again in a few days time. More fool me as I still haven't seen it repeated! You'd think I'd have learnt my lesson when I switched off 'Prom Night' on Sci Fi channel in the year 2000 and it never got shown again till last year. That's nine years it took me to see the third act disco fury of that piece of slasher history, and boy was it not worth the wait. Your review has pushed it a tad further back up the to do list, good to have you back.
Nik

Thanks so much for the kind comments, Nik... Yes, I'm hoping to get back into the game a bit blog-wise (including catching up with your excellent stuff).

If you're still looking out for Intensity, try the True Movies channel if you have access; it seems to be on there at least once a week, usually at 10pm. It's an enjoyable watch if you've got the time to settle into it.

Nice review. The screen adaptation of Intensity was pretty good. I still remember when it first premiered on TV all those years ago. I sat down to watch it and was very enthralled but then missed the second half because they were doing one of those 'watch the movie over two nights' deals that used to be very common but thankfully have faded away. This time around it was good that I didn't see the ending, however, because a few years later I sat down with the book and was blown away by the serial killers occupation. It nailed me in a way that no book ever has since, which I loved.

I love your writing and look forward to reading more horror reviews. All movies reviewed have been logged away in my "Giant Book of Things to Watch Eventually When I Have the Damn Time." Back to work with me, now...

Hey Ross,
I’m hosting the My Best Post blog-a-thon. It goes from May 21st-23rd.
Want to know the best part? You’ve already written your entry.
Just send me a link to your best/favorite/underrated blog post! Thanks!

This was an okay little TV thing, I thought. Impossible to watch now, though, after seeing Scrubs...impossible to see that guy in a scary light.

The book was good...super quick read.

And look, I'm no longer anonymous!

I'm just curious. Did it end like Haute Tension, or did it go a different path?

Hey Kaijinu -- It takes a much more conventional route than Haute Tension, so the two films' endings are totally different, really. A lot of people seemed to hate the end of HT... I'd be interested to see if they preferred this way of tying things up!