I first saw John Carpenter’s Someone’s Watching Me! as a teenager, when you could catch a TV movie on the box every night if you stayed up late enough. (These days, the late-night movies are all things I saw at the cinema in the late nineties – ouch!) All I really remembered of the film was a chilblains-inducing moment in which our heroine is talking on the phone alone in her apartment... when suddenly a black-clad figure dashes silently past in the background! Well, I must have found that pretty creepy to have remembered it all these years (not to mention put it in italics) so it was with some anticipation that I popped Warner’s new DVD – released as part of their fairly accurately titled Twisted Terror Collection – into the machine.

Let me tell you: the moment is there, it’s a doozy, and it doesn’t take long to get to it. Someone’s Watching Me! establishes its stalker theme right off the bat, as the camera glides the length of a telescope before disappearing right into its darkened lens (a truly evocative shot that seems to implicate the viewer as – lordy – both voyeur and victim). Speaking of victim, it’s attractive, endearingly gappy-toothed Leigh Michaels (Lauren Hutton) that the telescope of terror will soon be trained upon when, after taking up residence in an L.A. apartment, she finds herself at the mercy of an obsessed observer who tracks her every move and telephones her at all hours with whispered threats. 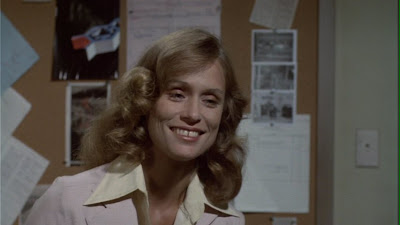 We first meet Leigh as she’s shown around the ultra-modern Arkham Tower building by a realtor who explains how every apartment is controlled by a computer that does things like sense the strength of the setting sun and adjust the room temperature accordingly. (Not bad for 1978, huh? My computer still won’t do that.) I found this idea creepy enough even without the added bonus of a leering psychopath, but Leigh’s a busy woman-in-peril TV director and probably hasn’t had chance to see Demon Seed yet. In any case, she’s pleased as punch with the place, and is soon all moved in.

As satisfied as she is with the evening climate control (a good thing, since she never closes the curtains) Leigh’s housewarming is soon marred by a string of vaguely threatening phone calls and mysterious gifts – first a mysterious telescope, then a mysterious orange bikini. Her new gay buddy Sophie (Adrienne Barbeau) tells her not to worry and takes her out for a meal but, even at the restaurant, it seems that Someone’s Watching Her, when a bottle of wine arrives compliments of a swiftly exiting stranger at the bar. As the mystery man’s attentions increase, Leigh becomes increasingly worried for her own safety, and Arkham Tower comes to seem less like an intelligently air-conditioned playground and more like a glass-walled prison of doom!

Someone’s Watching Me! is a wonderful blend of Hitchcockian stylings, 70s TV-movie terror and, thanks to the presence of a young John Carpenter in the director’s chair, early slasher movie technique. Carpenter is clearly intent on giving things a Hitchcock flavour: we open with a bombastic Bernard Herrman-esque score played over some ersatz Saul Bass credits (all parallel lines and sliding names), plus there’s the Rear Window-ish plotting, an overhead shot straight out of Psycho, and at least one reverse dolly zoom; it’s so stylishly slavish to the Master, I want to call it De Palmaian but can’t really spell it. This being only months prior to Carpenter’s cinematic breakthrough, everything also reeks of Halloween, including the strong female leads, occasional steadycam use, and faceless killer. Even the heroine’s name – Leigh (as in Jamie?) and surname Michaels (Myers?) – had me thinking of the slasher classic. 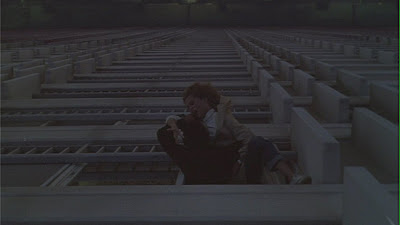 Leigh isn’t your average woman-in-peril, just as Someone’s Watching Me! isn’t your average woman-in-peril TV movie. She’s confident, independent and refuses to allow anyone to control her life, characteristics that Carpenter (who scripted as well as directed) establishes early on in a barroom scene where, after rebuffing the advances of several male admirers, Leigh calmly approaches a single man with the pickup line, “Hello! I’m Leigh Michaels!”. Later on, when things get even hairier, she’s not afraid to follow her stalker into a deserted basement, break into his apartment or, in a particularly ballsy move during the trapped-in-the-dark climax, demand that he come out of the shadows and show himself. As she rants to Sophie at one point, “How dare he invade my life!”.

While we’re on the subject of Sophie, what a refreshing character she is: not gay-for-a-few-wisecracks nor even seemingly attracted to gorgeous Leigh; she’s just a great best friend who also happens to be a lesbian. The fact is simply noted and they move on. In fact, of all the characters Leigh comes into contact with (I doubt she could pick her nose without someone coming on to her), Sophie is the least predatory and most positive. This may be a comment on the late-seventies theme of all men as potential rapists – here used to ominous effect when a male co-worker blindly ignores Leigh’s rebuttals by repeatedly asking her for a date – but also shines as one of the least showy, most affirmative portrayals of a gay character from the era. (William Friedkin simply wouldn’t have had a film if he’d represented gay men as matter-of-factly as this in Cruising two years later.) 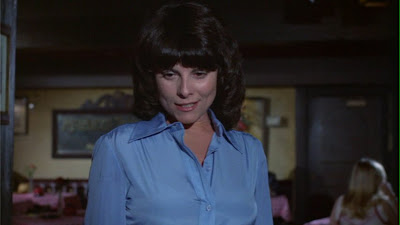 In fact, there’s precious little to complain about in Someone’s Watching Me! I would’ve liked to see more of Leigh at work; she seems to spend less time there than talking to herself while alone (or is she?!) at her apartment but, since her job doesn’t have direct bearing on the plot, it’s justifiable. After all, she’s not technically a genuine Anchorwoman In Peril – being instead employed behind the scenes as the person who says “Fade in on camera three” during the news – but there’s more than enough woman, peril and indeed TV stuff here to justify the moniker. I’d even go so far as to say the film is absolute canon as the Anchorwoman In Peril genre goes... It’s certainly scary, thrilling and, er, glamorously seventies enough. Someone’s Watching Me, I’ll be watching you in future!