Not since going to see Jaws on the big screen (it was a revival – Jeez, I’m not that old!) have I been as excited/nervous as I was before last night’s screening of Rob Zombie’s Halloween. The 1978 original remains one of my all-time faves, so the excited/nervous ratio was something like: 77% “It's Halloween!” versus 21% “It's gonna be a travesty!” (The other 2% was me wondering whether or not to buy a drink.)

With Jaws, there was plenty of excitement compared to just a small ratio of nervousness (e.g. tickets might sell out; the projector might break down; should I get a drink?). As it happened, something actually did turn out to be wrong with the print, and the film kept skipping important moments – like when Roy Scheider went from splattering a scoopful of chum into the sea to suddenly jumping back in terror for what seemed to be an unspecified reason. I mean, I knew he’d seen the shark but what about the Jaws virgins in the audience? Perhaps they thought he was just scared of getting a bit of chum on his pants. I know I would be. Anyway, the point is: the slight amount of nervousness was justified... Jaws wasn’t quite the Jaws I knew and loved. 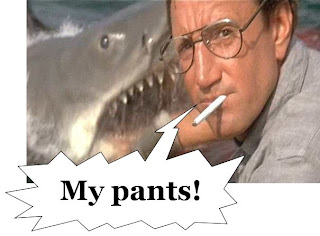 Halloween-wise, the nervousness was also justified. Not because there was anything wrong with the print, nor did I go thirsty during the screening... it was just that Zombie’s new vision of the classic slasher, well, didn’t really feel anything like the classic slasher. It felt more like a remake of the remake of Black Christmas.

Don’t get me wrong, I actually thought 2006’s Black Christmas was an enjoyably dizzy blur of blood and bitching, but I wouldn’t want to base another film on it. In Halloween 2007, everything from Michael Myers’ white-trash nightmare of an upbringing, through his violent escape from the asylum, to his stalking of various interchangeable teenagers and climactic chase through the cavity walls of a big old house, all I could think of was Black Christmas 2006 (as well as how you have to specify particular versions of horror films these days).

Halloween is, of course, reminiscent of its 1978 progenitor, and by reminiscent I mean it has all the same characters doing all the same things and getting killed in mostly the same ways. But dammit if I didn’t care who died or how – and that apathy extends to Scout Taylor-Compton as nominal main character and final girl, Laurie Strode. Taylor-Compton is likeable, and her appearance around halfway through is a welcome relief from the unsympathetic greaseballs who populate the move until then, but there’s little to distinguish her from her friends, and her giggling innuendoes quickly wear thin. The only death scene that genuinely perturbed me was the one reserved for the always lovely Dee Wallace, nicely cast here as Laurie’s mom. In the approximately four minutes Wallace is onscreen in Halloween, she exudes more warmth and personality than any other character. Which seems to be all the more reason to shove her face through a glass coffee table in crunchy close-up. 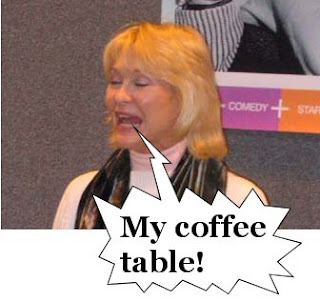 Moving away from John Carpenter’s original, the coloured-in backstory of Michael’s childhood offered by Zombie’s version is surprisingly successful, at least in terms of delivering the gory thrills. Creating a believably gruesome family background for him is another matter entirely, however, and the stripper-mom/abusive-dad clichés offered up are trite and broadly comic. Considering Zombie’s apparent urge to explain explain explain, it’s perplexing how much seems to go unaccounted for – such as how Michael finds out about his one surviving relative when he escapes from captivity, what he wants to do exactly when he catches up with her, and why he wants to kill a bunch of other folk. This sort of stuff didn’t matter in the original, where Michael was simply a “shape”, a “boogeyman” and a faceless bringer of death, but the remake seems to set itself up to fail in this respect by lingering on some points but glossing over others.

In all, I might’ve enjoyed this more as a killer-psycho movie without the Halloween banner. I certainly couldn’t rate it higher than any of the Myers-related Halloween sequels, and that includes the lazy-but-stylish Part 5 and muddled-but-exciting Part 6. As for Mr Zombie... Rob, when you're looking for your next movie to remake, keep your hands off Black Christmas 2006!

I HATED this movie. I did think the first third was pretty funny in that Showgirls accident kind of way.

I agree with a lot of what you said, although you seemed to enjoy it more. It's too bad I didn't like it. I went in with a lot of hope because I like that Rob Zombie guy. How awesome is it to see fans of horror making horror films? But I was extremely disappointed and also can never listen to Love Hurts in quite the same way again! Damn you Zombie!

PS-Speaking of things going wrong, I went to see the Hunger at a revival house 4 times (they had 4 showings and dammit, I was there!) and each time something fucked up. It was SO frustrating. At one point, the film was even upside down.