Eyes of a Stranger

It's SHOCKtober! and the new horror DVDs are pouring out like so many gooey seeds from a smashed pumpkin. My favourite recent release has to be Warner's Twisted Terror Collection (from which I've already reviewed the excellent Someone's Watching Me!). Also included is another stalker-themed gem...

In the headlines tonight: Lauren Tewes, of seventies schedules stalwart The Love Boat, plays a bona fide Anchorwoman In Peril in Eyes of a Stranger! Ms Tewes (pronounced “Tweeze”) is Jane Harris (“Harreeze”?), a Miami newscaster who’s just sickened by a recent spate of rape-murders around the city. So sickened, in fact, that she keeps butting in on her co-anchor’s screen time to urge local women to call in and report any “odd encounters” that might relate to the crimes. (I think she even busts in on the weather at one point, forecasting a cold front of hatchet killings sweeping into the Dade County area.) 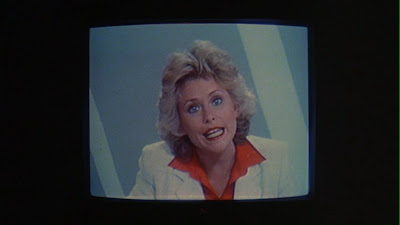 Meanwhile, one Miami waitress who hasn’t been keeping up with her current affairs is returning home to her empty apartment to find a window wide open, the phone ringing, and a scary voice on the line saying, “I know you’re not wearing a bra, Debbie” – to which she blurts back, “Who the fuck is there?”. Believe me, it’s never a good idea to use profanity when trying to calm down a potentially confrontational situation, and soon Debbie has become the killer’s latest victim, along with her visiting boyfriend who, after a nasty incident involving an oversized meat cleaver, ends up lying several feet away from his own head. Fuck!

Back at the Harris household, we meet Jane’s little sister, Tracy, played by Jennifer Jason Leigh. It’s a great early role for Leigh: as a deaf-blind mute she really has to emote to get those scenes across (and no lines to learn, either – score!). It turns out that Tracy has only been sensory-impaired since an incident in her childhood when a prank went wrong nasty man abducted her and did god knows what while Jane was off making out with a boy from school. So, really, it was all her older sister’s fault. No wonder she’s got such a chip on her shoulder about that killer rapist on the loose.

For now, anyway, the plot thrust is back with Jane, who’s spotted a creepy neighbour (John DiSanti) doing all kinds of creepy things... like disposing of a bloodstained shirt in the basement of the apartment block, and washing muddy marks off his car the day after a murder down at the beach. In an interesting twist, she starts stalking him, phoning him with “I saw what you did”-style accusations – and, unfortunately, not disguising her voice very well. How long will it be before he finds out who’s onto him? Has she inadvertently put her near-helpless sister at risk? And when will Tori Spelling remake this movie (please)? 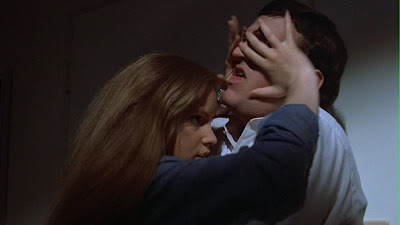 All these questions – well, except the one about Tori Spelling – are answered in a wonderfully gruelling climax, wherein things are wrapped up neatly with the use of some of Tom Savini’s messy gore effects. Catch this on Warner’s newly restored DVD release, in fact, and you’ll be treated to some gushingly good bloodletting throughout (a particular bonus for UK viewers who’ve only ever had a BBFC-cut version of an already trimmed, R-rated American cut). Being at least as much Anchorwoman In Peril-focused as it is slasher, of course, the film isn’t outrageously gory, but director Ken Wiederhorn makes sure that what is there really sticks. Actually, while I’m thinking about it, I can’t name another straight-up Anchorwoman In Peril outing that’s quite as liberal with the red stuff as this. That’s got to be worthy of some sort of recognition, right?

Another pleasing characteristic of Eyes of a Stranger is the attention it pays to its murder set-pieces. These aren’t just random deaths chucked in to up the bodycount. Each slaughter sequence is played as its own little movie-within-a-movie, in which we get to know the characters involved, watch their terror increase as they realise how much danger they’re in, and then, finally... splat! Tomorrow’s news headline.

As chief anchorwoman, Tewes is pretty amusing, constantly refusing to move in with her boyfriend on the grounds that she has to look after her sister – yet constantly ditching Tracy to follow up bizarre murder-hunt clues (a cuckoo clock?!). Jamie Lee Jennifer-Jason-Leigh is also good value in what’s not quite her debut – although she does get an “Introducing” credit – and her climactic tussle with the killer is as thrilling as it is inevitable. While you couldn’t call Eyes of a Stranger essential horror viewing, it’s a treat to find it released on DVD. I’d rather go deaf-blind-mute than part with my copy!