I’m the Girl He Wants to Kill 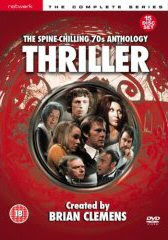 Confession time: Long, long before Anchorwoman In Peril! existed (i.e. sometime last month) I flirted, floozied and experimented with running a short-lived blog called Buon Giallo, all about Italian horror. What can I say? I was young... I didn’t know what I was doing... I didn’t inhale... I also didn’t keep the blog going for very long. I guess my heart just wasn’t in it. Anyway, one of the films I talked about was actually an episode of the 70s British TV series, Thriller. It’s a great episode deserving of greater recognition – and, now that the whole series of Thriller is available on DVD, perhaps it’ll be discovered by a new generation of horror fans. If so, they’ll find a gripping thriller featuring a classic final girl years before the slasher cycle kicked into full swing. In this hope, I hereby reprint my review of I’m the Girl He Wants to Kill. (How’s that for getting away with only one paragraph of new material for today’s entry? ... Score!)

In 1973, Dario Argento presented the TV series Door Into Darkness on Italian TV, comprising four, hour-long stories of murder and suspense modelled on the giallo films that had brought him to prominence. Over here in the UK, screenwriter Brian Clemens had envisaged a similar show called Thriller, of which I’m the Girl He Wants to Kill is a particularly giallo-like episode from the third series, originally broadcast in 1974. [See how I tied it all in to Italian horror for Buon Giallo? Clever, no?]

Token American Julie Sommars stars as Ann Rogers, a hardworking employee at Parker Industries, based in a London high-rise. What this company actually does is only vaguely defined, but it must take up a lot of time because Ann is always finding herself working late on things like “the Jamaican project”. Arriving home to her flat one evening, Ann passes a mysterious man in the hallway and, in a superbly spooky scene, discovers her neighbour’s dead body on the upstairs landing. She provides a description of the killer to the police – who believe him to be responsible for several other murders in the area – but time passes and the culprit remains at large.

One good thing comes out of Ann’s visit to the cop shop, however: she bags herself Detective Sergeant Tanner (Tony Selby), a prime slab of afro-haired 70s studliness, and useful boyfriend to have around if it looks like you might be stalked by any deranged psychos in the near-future. Of course, this is exactly what happens to Ann; after spotting the killer in a local jewellery shop one lunch hour, she’s chased back to her office and barely makes it back to safety. A quick phone call to Tanner assures her that her pursuer has been apprehended and, ever the diligent worker, Ann carries on with her day’s work until night falls and she’s the only one left in the building. Except, that is, for a familiar figure lurking in the lobby below, knife in hand and ready to strike... 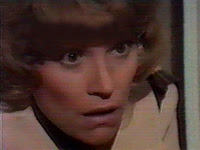 I haven’t seen any other episodes of Thriller but, if I’m the Girl He Wants to Kill is anything to go by, it looks like I’ve missed a treat. Lean, taut and terrifically suspenseful, the episode is tele-terror at its best. Its premise is played out at just the right length to ensure we get to know and care about the characters, all the while taking care to plant ominous pointers to the trouble Ann will encounter later on – from electrically-locking doors, to windows sealed “for your comfort”.

The remainder of the story constitutes a harrowing battle of wits between killer and super-secretary – who, while resourceful, is never played as unrealistically as she might be in this post-Buffy the Vampire Slayer age of martial arts-trained female empowerment. Lifts and telephone switchboards become instruments of tortuous tension as Ann’s familiar workplace becomes a deadly trap. There’s even a moment reminiscent of The Bird with the Crystal Plumage, in which characters find themselves trapped between two sets of glass doors. Ann learns to turn the tools of her trade against her attacker... while he learns that it pays not to be overweight if you’re a psychopath intent on chasing your victim up to the twelfth floor and back.

Now available on DVD as part of the complete Thriller series box set, I’m the Girl He Wants to Kill also includes an extended opening sequence shot for American TV, featuring – naturally – a gratuitous shower scene, as well as lots of shots of feet padding around portentously (I’m guessing the original cast weren’t available for reshoots). I’d encourage you to seek out the film in whatever version you can... It’s absolutely thriller-ering.

I've only seen a few of the Thriller episodes, but they are all amazing. The one I remembered like a childhood fever dream was the one called Dial a Deadly Number with Gary Collins (me-ow!). For years I searched for the movie featuring a girl in a turtleneck, someone getting their wrists slit and a guy being cut over 200 times with a razor, driving him MAD. I haven't seen this episode since I was a kid, but I finally got the first season of Thriller, so it's a start, right?