Going through my pile of as-yet-unwatched DVDs last night, I discovered I had two films with the same title. Now, life is confusing enough without this kind of malarkey... I mean, who hasn’t sat the kids down to watch Fletch, only to discover they’ve accidentally slipped Andy Warhol’s Flesh into the machine? And I don’t even want to think about the disastrous screening of Kramer vs. Kramer I put my elderly grandmother through (there’s barely anything on that box to distinguish it from Freddy vs. Jason). Nope, you don’t need me to tell you that title-sharing is a bad idea.

So, what is one to do when faced with two films with exactly the same name? And what title could be so enticing, so powerful, so intriguing that there’s more than one movie vying for it? Well, I’ll tell you... it’s Scream Bloody Murder. Isn’t it just... chilling? All that screaming and blood, not to mention the murder. I bet it’s a real shocker. Trouble is, which film deserves it? There’s only room for one Scream Bloody Murder in my collection, and only one way to settle the dispute... Ding-ding! Title fight! 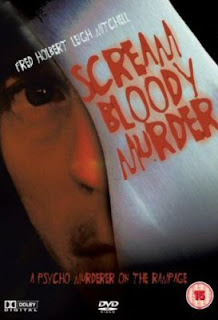 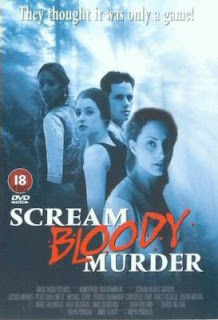 The first contender for the title Scream Bloody Murder is Marc B. Ray’s 1973 film – we’ll call it SBM’73 – about a disturbed young man who embarks on a killing spree across California. Matthew (Fred Holbert) has been in an asylum since childhood, when he ran over his father in a combine harvester. Now he’s out, he has a hook for a hand (thanks to the same incident) and he’s not happy. The root cause of all this anger is the fact that his mom’s remarried, so he shows his disapproval by hacking up the new husband with an axe – and then accidentally killing Ma for good measure. From here on in, it’s meet-greet-slaughter, as Matthew does away with just about everyone who crosses his path, spurred on by visions of his dead mother. Most of his victims scream, it’s all very bloody, and peppered with murder... Sounds like a strong contender, huh? Let’s meet the competition.

Ralph E. Portillo’s Scream Bloody Murder is a straight-to-video slasher move from 2000. We’ll refer to it as SBM2000 to distinguish it from the 1973 film and make it sound a bit like a vacuum cleaner. Its heroine is “Jewels” (short for Julie – sheesh, this one’s already losing points), who arrives at the remote Camp Placid Pines to work as a counsellor over the summer. But rumours are rife that a killer named Trevor Moorehouse stalks the surrounding woods and, when her colleagues start disappearing one by one, she begins to believe there might be some truth to them. Let’s see how the movie stacks up against its rival...

Round 1: The title card 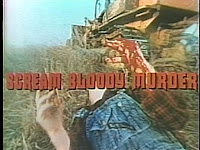 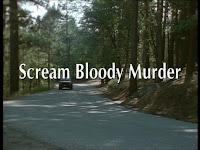 No contest here: SBM2000 pits some random trees and a generic title font against SBM’73’s shocking freeze-frame of a screaming child with a mangled hand! You can almost see the blood dripping off the screen. Winner: SBM’73 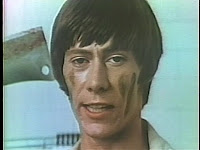 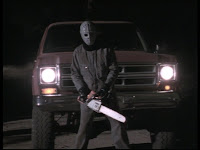 Both killers are pretty freaky: Amish hair and a hatchet is not a combination I’d like to come up against but, as madmen go, SBM’73’s Matthew is a little on the weedy side. On the other hand, Trevor of SBM2000 sports Jason’s mask, Leatherface’s chainsaw and Michael Myers’ boiler suit... He’s a one-man fashion parade of horror. As the camera panned behind him, however, that’s when I knew we were really in trouble... 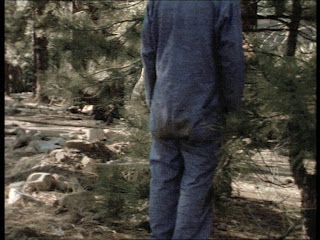 Yes, Trevor Moorehouse has pooped himself, people. Now that’s disturbing. Here is a killer so psychotic that he doesn’t even drop ’em to drop one off. On the plus side, I can’t see him creeping up behind you unannounced, if you get my drift. Still, to be quite honest, I don’t want him anywhere near me – and that’s surely the best compliment you can pay a movie psycho. Winner: SBM2000

Round 3: The action (Spoilers!) 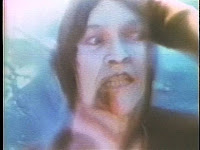 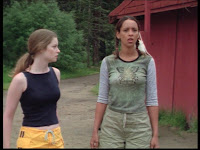 It would be accurate enough to describe both Scream Bloody Murders as slasher movies, although SBM’73 is a more character-focused piece, while SBM2000 is a standard run-around-the-woods hack-’em-up. Both are highly reminiscent of other films, the difference being that SBM’73 lays down the conventions that many others would later follow (1980’s Maniac is an obvious descendant) while SBM2000 simply copies superior predecessors like Friday the 13th and Madman.

Both films also feature a fairly equal amount of murder and mayhem, but only SBM’73 had me in any way cringing. Its gore is mainly limited to bright crimson blood splashing around, but Matthew’s attacks (particularly with the hatchet) are so frenzied, they come across as quite brutal. In contrast, the deaths in SBM2000 are largely bloodless and often off-screen (whereas the only off-screen killing in SBM’73 is that of a dog – although it’s still a distressing moment, especially the way it makes Matthew cry).

As for the fate of each killer... SBM’73’s climax finds Matthew inside a church, assailed by visions of his former victims who proceed to hack him to pieces, culminating in a gob-smacking final shot. At the end of SBM2000, the killer is, er, handcuffed and driven away (...or is he? Hmm). Winner: SBM’73

SBM’73 is a nasty, engrossing little grindhouse pic that still manages to disturb despite its age, grainy shape and sometimes dawdling pace. 3/5

SBM2000 is a witless clone of better slashers, with characters you couldn’t care less about, long stretches of tedium, and a convoluted but ineffective climax. 1/5

The winner!
SBM’73, you really deserve the title Scream Bloody Murder and you’re welcome to hang around in my DVD collection as long as you like. SPM2000, you need a new title. I suggest The Poopy-Pants Murders.
Posted by Ross Horsley at 09:53

I love SBM '73. That scene where the maid gets killed MUST have been directed by someone on the 2nd Unit! It looks like a whole other film!

It's a lot of fun and lead guy is REALLY over the top. He kind of makes the whole thing worthwhile.

PS - I just discovered that you have a tag called Films that fucking suck. I instantly clicked on it because you know, I'm a glutton!