It’s easy to write about a bad film. The wisecracks, the insults… they just seem to flow. The same goes for the so-bad-they’re-good films – perhaps the easiest of all to waffle about. Slightly more difficult is describing the genuinely good films. There’s a niggling desire to somehow do the film justice, but the passion is at least there and the praise comes easily enough. Even the mediocre flicks offer a little of something either way to dig into. But how do you write about the movies filled with good stuff but which, for some barely definable reason, just don’t quite work? That’s a hard one. And that’s Eyewitness. 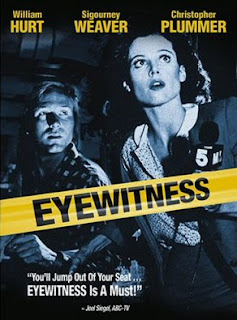 Eyewitness is filled with elements competing for your attention but, if you manage to isolate any one of these, you’ll find it is itself made up of at least two conflicting parts. Our main character, for instance, is janitor Darryl Deever (William Hurt). He seems likeable enough but he’s also incredibly cocky. We watch as he discovers the aftermath of a murder in his building, but we’re never quite sure whether we can trust his version of events. He’s infatuated with TV news personality Tony Sokolow (Sigourney Weaver) and, upon meeting her at the crime scene, leads her on by suggesting he knows more about the case than he actually does. As well as presenting the news, Tony is a concert pianist. And she’s also dating an older man (Christopher Plummer) who’s also involved in sneaking Jews out of Russia.

You might not be surprised to learn that all this is the result of scriptwriter Steve Tesich combining two scripts that were going nowhere into one story. The result is one script that, for a long time, feels like it’s going nowhere. It soon becomes clear that Tesich is far more interested in creating characters – and tweezing them like struggling flies into a web of tangled relationships – than giving them anything straightforward to do. Hence, clouding the picture are Darryl’s friend Aldo (James Woods) who may or may not be the killer and is forcing Darryl into a relationship with his sister; Darryl’s parents; Tony’s parents; Aldo’s parents; two cops (one of whom is a young Morgan Freeman) shadowing the characters’ actions; and a mysterious, dark-haired woman... I honestly wouldn’t have been surprised if Darryl’s dishwasher had been struck by lightning, developed a personality, and demanded a subplot of its own.

Frustratingly, amongst the melee are three standout action sequences that really demonstrate where director Peter Yates’ strengths lie. These scenes – a motorbike chase, a dog attack, and the film’s horse-trampling climax – are absolute dynamite, the plums in the pudding and the visceral jolts of suspense that the film really needs.

Despite tying up its central mystery, Eyewitness ultimately remains bafflingly opaque. Even its title is ambiguous, since Hurt isn’t really an eyewitness to the crime at all. It’s understandable that the studio pushed for an alternative to the script’s horrible original title, The Janitor Can’t Dance. But you can’t help thinking it actually would’ve suited the film more.