Tireless, that’s me, dear Anchorwoman In Peril! reader (and I wish you’d stop calling yourself that). I’ll search out any cheap obscure DVD in order to provide you with an incisive commentary on the merits – or not – of the film in question. So, when I remembered a film from my childhood that featured Suzanne Somers as a TV reporter stalked by a killer, I just knew it was my duty to seek it out... at any cost!

As it happened, that cost was £1.09 on Amazon (plus postage, mind) and the film was Exclusive, a 1992 TV movie riding on the coattails of Somers’ then-popularity in the sitcom Step by Step.

As Anchorwomen In Peril go, Marcy Howard (Somers) really is in peril. Barely a moment goes by when she’s not being crept up on by some sort of mysterious, shadowy figure. First it’s when she’s lying in bed, sleeping fitfully as a black-gloved intruder slips into the house, creeps up the stairs in the dark, hovers ominously above her, and... [camera pans up to face] False alarm – it’s just her husband, Reed (Michael Nouri)... Phew! He’s arrived home late, but there’s just enough time for a bit of nookie before Marcy heads off to work at the TV station.

Some time later, Marcy is working alone at the office when a black-clad stranger sneaks up behind her desk. She’s too busy typing to notice as he opens up a mysterious briefcase and… [camera pans up to face] False alarm – it’s just her co-worker Allen (Ed Begley Jr.)... Phew! Talk about suspense! Marcy’s not even being stalked by that killer yet, but her friends are doing a good enough job at skulking around and keeping her in a constant state of peril anyway! 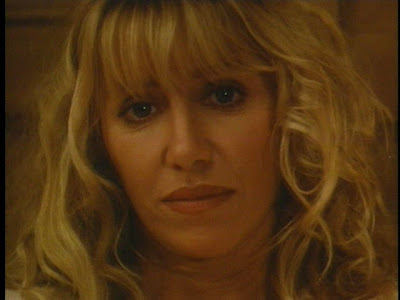 So what about the actual stalker? Well, one night, Marcy’s at her desk when she receives an anonymous phone call telling her to go to the Blue Mood bar if she really wants a story. This is a stroke of luck, as the new station manager has been on her back recently, demanding higher ratings and reminding her that she used to be LA’s top investigative reporter. Of course, she also used to be an alcoholic and, in giving up the hard drinkin’, she also seems to have lost touch with the hard news.

When Marcy arrives at the Blue Mood bar, however, she won’t have to worry about forking out for an overpriced mineral water. Everyone’s been killed in a gruesome shotgun massacre – and she’s first on the scene with a camera crew. Marcy’s back in the big league and making the headlines herself... but at what cost? How long is it before the killer comes after her? And will she ever be able to get any work done without someone sneaking up on her?

Exclusive harks back to the days when, if you had a hot TV actress, a camera and Ed Begley Jr., then goddammit you had a movie. For much of the running time, it’s just that: Somers and Begley goof around in the studio; Somers and Begley argue about ratings; Somers and Begley follow a hot lead... And, occasionally, Michael Nouri pops up like a screensaver to protect your TV from the combined strength of all that blonde.

For an Anchorwoman In Peril movie, however, Exclusive is lacking in the requisite hysteria. Despite being a recently-divorced former alcoholic fighting off a murderous stalker (as well as the urge to down the odd bottle of vodka) Somers is pretty together and, as a result, it’s all a bit bland. Sure, there’s the usual investigating-strange-noises and receiving-strange-phonecall exploits, but we might as well be watching Somers in Three’s Company for all the suspense on offer. On the other hand, I was amused by Marcy’s “research”, which seems to consist entirely of clipping articles out of the daily papers... So much for being on the front line!

We do get a magnificent Live On Air wig-out in the second half, when Marcy is forced to report on her own attack at the hands of a man in a gimp mask, and turns into a comatose wreck in the middle of the nightly news... 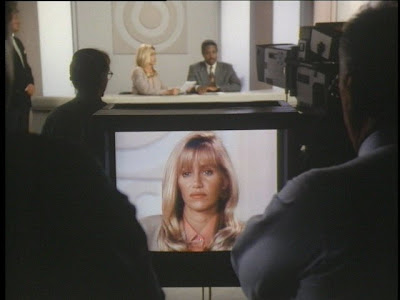 And then there’s the moment when she’s driving along and takes her eyes off the road for a second to reach for her vodka bottle... 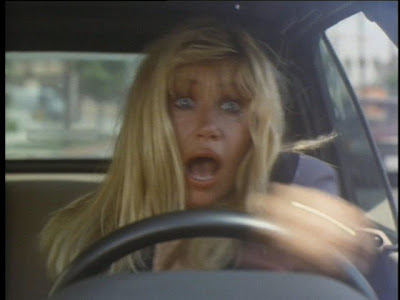 Unfortunately, such highlights are spread as thinly as the thrills, and Exclusive plods along to one of those climaxes where the gun goes off, the police break in, and you’re supposed to wonder which of the “bodies” will move first: Marcy or the killer. I didn’t hate it but, in the ten years since the initial Anchorwoman In Peril cycle, everyone seems to have forgotten how to make the formula fun.

I feel like both Suzanne Sommers and Loni Anderson are the same type. Underrated actresses that are extremely difficult to look at. They're just weird looking. I have this movie called Whisper Kill with Loni - whew! The wig in a ponytail looks horrible. Anyway, I kind of dug this movie. Maybe it's because I was doing stuff while it was on, but it did entertain me. Although I'd forgotten much of what you'd mentioned, mostly Begely and her drinking problem. In fact, I'm not sure what I remember now... should I see it again? Probably not...