As slasher expert “Buzz” points out in what’s basically the definitive essay on the subject of Anchorwomen In Peril, one of the great pleasures of AIP movies is the moment when our heroine wigs out Live On Air. Whether it’s Lauren Tewes grabbing the limelight to urge viewers to rally against a killer in Eyes of a Stranger, or The Howling’s Dee Wallace proving the existence of werewolves by actually turning into one in the middle of the six o’clock news, it’s always the scene you’re waiting for – and the bit you’d kill to see in real life. 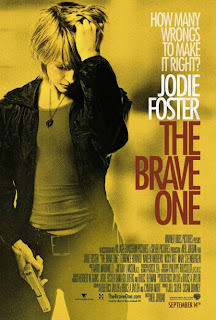 In The Brave One, Jodie Foster plays New York radio presenter Erica Bain, for whom this inevitable moment comes when, after witnessing her boyfriend’s murder at the hands of a street gang, she breaks down mid-show, leaving a minute of dead silence. But, this being an Oscar-winning actress we’re talking about here, she’s not lost for words for long, and is soon delivering a heartfelt monologue off the cuff and – more importantly – on the air. It’s classic Anchorwoman In Peril hysteria played with Academy Award credence. Naturally, I loved it.

The Brave One is first and foremost a vigilante movie. As well as soliloquising on her show, Jodie swaps her denim jacket for black leather, starts wearing make-up, and gives us a taste of her sharp-shooting, bad-ass side as New York’s newest bringer of justice (she’s also an ace at poker – see Maverick). After the aforementioned personal tragedy (that’s the boyfriend’s death, not Maverick) she decides to get herself a gun and go after the punks responsible, popping holes into a few other murderers, abusers and a subplot about a local gangster along the way. (Jodie also speaks fluent French... just see A Very Long Engagement if you don’t believe me.)

It seems there’s no stopping this self-declared “supercunt” until a police detective (Terrence Howard) starts getting suspicious after hearing one of her more emotive radio broadcasts and spotting her at the scene when a couple of thugs are shot dead on the subway. Will he bring her down? How many more crooks and crims will she kill? And, as Jodie might say, “Excusez-moi, où est la café? Je voudrais un croque-monsieur, s’il vous plaît.”

I did say I loved the moment above when Erica waxes lyrical on the radio and, well, that’s true; I’m a sucker for that sort of shit. But The Brave One lays on the schmaltz quite heavily at times – none more so than whenever the Sad Theme Song appears on the soundtrack, as it does at various junctures. I’ve always considered director Neil Jordan a fairly edgy, dangerous kind of guy (I mean, look at the demented vigour with which he tried to kill the careers of Annette Bening and Robert Downey Jr. in 1999’s odd psycho-thriller, In Dreams) but there’s never any danger of us condemning Erica’s violent actions in this film, thanks to this kind of emotive thinking-for-us.

That said, Erica does plenty of thinking for herself. The Brave One is as much about how violence changes a person as it is about how good it looks in slow-motion, and Erica’s internal journey is one we follow every step of the way. Foster is riveting in the manner she always is, albeit to the point that I rarely thought of her as Erica Bain – more as Jodie Foster doing a radio show (“Why does Hollywood megastar Jodie Foster live in such a crappy apartment?” I actually wondered at one point).

I’m not sure how seriously I can take such upfront vigilantism as a subject for emotional drama – to be honest, I think I only connect with it as comic-book revenge fantasy, as in this year’s Kevin Bacon-starrer, Death Sentence – but The Brave One provides enough suspense thrills, cat-and-mousery and New York nastiness to remain gripping throughout its lengthy running time. Next time, however, I’d like to see Foster in something that isn’t about her being fucking amazing. Have you seen Flightplan? She also designs planes.