I’ve tracked down some obscure films in my time, pawing through bargain bins filled with battered ex-rental video tapes, trawling eBay for titles deleted in 1987, and surrendering my credit card details to websites so foreign even the HTML was in French. When it came to finding the 1992 straight-to-cable thriller Intimate Stranger, however, I struck lucky: I just wandered into a second-hand shop in London and there it was, gleaming improbably on the shelf in all its region 4 DVD glory – a film currently only available on DVD in Australia.

Why had I wanted to see Intimate Stranger for so long? Let’s count the reasons: (1) It stars Deborah Harry as a phone-sex operator. (2) It stars Deborah Harry as a phone-sex operator in peril! Isn’t that enough? Do you even need to know that it also co-stars Tia Carrere (the Relic Hunter herself) in an early role as an over-enthusiastic hooker? Or that Twin Peaks’ Grace Zabriskie has – eww – a fellatio scene? Or that, at the climax, we’re treated to the truly insane sight of Deborah Harry wielding a flame-thrower whilst screaming “YOU DIRTY BASTARD!”...? Now tell me that hasn’t zoomed straight to the top of your must-see list?

Harry plays Cory Wheeler, a platinum-blonde telephone sex worker who, when she’s not pretending to be a naughty 15-year-old in black panties, also sings at a local dive called the Tom Tom Club (seriously, you should see the restrooms... yeucch!). One night, Cory’s peddling her sexy shtick to the usual clients (and smoking her way through about ten packs of fags) when she finds herself chatting up a particularly sinister individual who claims to have a woman tied up in his house. “My inside stuff is coming out... and her INSIDE stuff is coming out,” he intones, before taking out a knife and slitting the girl’s throat with a cry of: “My inside stuff is white... and her inside stuff is red... red... red!”

Needless to say, Cory’s pretty freaked out. Who wants to hear about yucky white stuff? Especially when your hair looks like this: 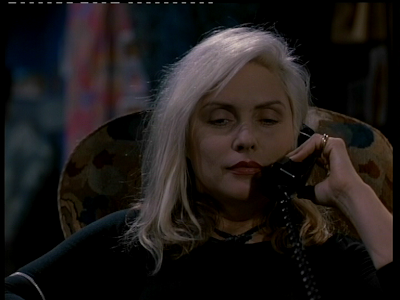 The whole experience is enough to drive a (Debbie) harried phone-sex operator straight to the cops, which is exactly where Cory heads. Unsurprisingly, the homicide squad aren’t interested in a case where the witness can provide no description, no evidence and no corpse, but before Cory can storm out, she’s approached by sympathetic officer Nick Ciccini (James Russo) who offers to help catch the killer on his own, in the hope that it might fast-track his promotion to detective.

Back at the apartment, Nick installs a state-of-the-art tracing device on Cory’s phone line: 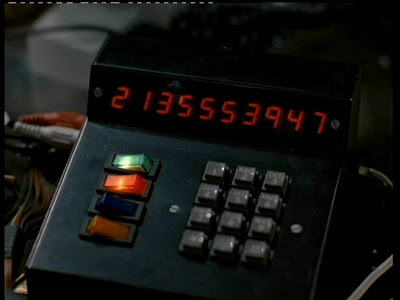 Sure enough, the killer calls again, but – curses! – he must be using a scrambler, because all that comes up on the tracer’s digital display is a string of random numbers. Luckily, Nick has a buddy in the telecommunications department who’s able to provide him with the credit card details and address of the murderous caller, and soon he and Cory are swept up in a whirlwind of mystery, danger and romance. And you know what happens to your hair in a whirlwind: 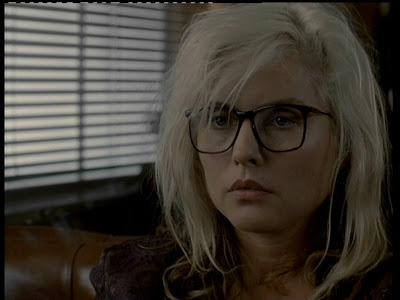 Intimate Stranger is the stuff that straight-to-cable dreams are made of, and I loved every dirty-talking minute. By the ten-minute mark, Debbie Harry has already smoked 400 cigarettes in eye-watering close-up, snarled the word “pussy”, and delivered a phone fantasy about sitting in a dentist’s waiting room without any knickers on. I’m sure John Waters was thinking of her when he envisaged Serial Mom’s evil streak.

Then there’s the first murder: a thunderball of sleaze, featuring so much topless torture and talk of “inside stuff coming out” that I was actually a teensy bit shocked in my old age. If anything, the movie calms down somewhat after this startling opening, and settles into more familiar mystery territory – although it’s not long before a frazzling sequence set in a sex shop during a power cut (!).

With the added bonus of a few Deborah Harry vocal performances unavailable anywhere else, Intimate Stranger is the very definition of a lost gem. It would have benefited from a bit more suspense during the midsection, but the climax is a dizzy, delirious affair, which rockets around dingy alleys, seedy motels and the decaying stairwells of a derelict building. Quite where that aforementioned flame-thrower comes from, however, is anyone’s guess!

Dude, I beat you on obscure finds. I actually had the poster for this movie! So there!

THIS would be a perfect choice for your column. I was actually surprised at how strong it is on the sex-&-violence front. It's a real sleaze-fest, but completely enjoyable at the same time. Highly recommended!