I’m sorry. I’ve hardly the slightest inclination, bad or otherwise, what was actually going on in the 2003 Italian giallo Bad Inclination. I tried to understand it... really, I did. It’s not as if I’m totally stupid – I “get” David Lynch and once guessed the killer in a Dario Argento movie – but sometimes you just have to admit defeat.

Let’s take a look at the plot. No, scratch that, it’s just impossible. (Don’t believe me? See the IMDb listing. No plot synopsis, no plot summary, not even a keyword!) You’ll have to make do with a description of some of the main characters instead.

There’s Mirta Valenti, played by former giallo babe Florinda Bolkan, an artist who believes that art-imitates-life-imitates-art, especially in the case of a string of real-life murders recently committed in her apartment building by a set square-wielding killer. Look, she’s even painting a portrait of a woman who’s been stabbed through the neck with a metal set square: 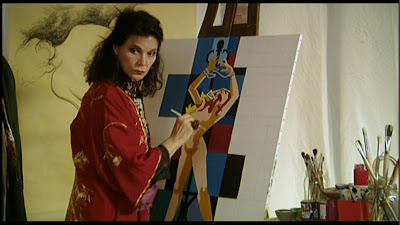 Yes, that’s right, a set square... That piece of maths equipment that comes in the same box as a protractor and compasses but seems to serve no real purpose unless perhaps you’re a technical sketcher, when who knows what it’s capable of? The choice of weapon is original at least, although its use is never explained in this film. But, then again, neither is anything else.

Anyway, there’s also Mirta’s housekeeper. I’m not sure of her name, but she seems to be blackmailing Mirta for some reason, until Mirta gets back at her by allowing her dog to go number-ones all over her bedspread (and when I say number-ones, I really mean it – that bed is soaked!).

In a nearby apartment are Otilia and Nicole, two scheming lesbians, the latter of whom is a faded 80s pop diva (and is played by Eva Robin’s, the infamous “Girl on Beach” in Tenebrae). Otilia has a thing for Premio, a young architecture student who enjoys submissive sex and keeps a fistful of set squares on his desk.

Then there’s a nosy landlady, an opinionated vagrant (played by Django himself, Franco Nero), a TV talk show host, at least three detectives on the case, and a drugged-looking Persian cat. One, or perhaps all of these, may be the set square killer, and my money’s on the cat. 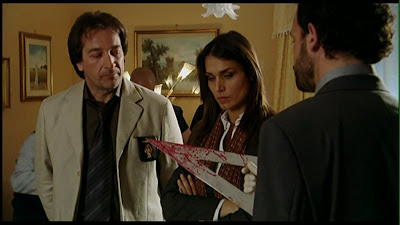 It’s not spoiling anything to let slip that one particular character is revealed as a killer halfway through Bad Inclination. The black gloves are off, and he/she is ready for their close-up, Mr De Mille. In this film, a killer is not necessarily the same as the killer, however, and I’m still not sure whether this revelation was a red herring, a damp squib, or a mixed metaphor.

Erratic as it is, the film isn’t actually boring (which is, in my opinion, the cardinal sin a film can commit). There’s always something going on, partly due to the fact that barely a single scene lasts longer than a minute. A particularly priceless moment sees one character spring a practical joke on another with the aid of a fake set square! Everyone looks trashy – especially in comparison the Rome backdrop – and their dialogue has that translated-from-Italian feel that never fails to entertain.

Don’t watch this film if you can’t bear bad dubbing, as Shriek Show’s DVD comes with an English language track only, and the voiceover artists seem to delight in giving the actors’ mouth movements as wide a berth as possible. In fact, don’t watch it at all if you don’t have at least a mild soft spot for bad cinema. As far as cheap-thrill psycho-cinema goes, I’ve seen a lot worse... but if you know me, you’ll know that’s no recommendation.