Well, I did promise I’d be having a look at Dario Argento’s TV anthology series Door Into Darkness, but I never said I’d be watching the episodes in order. (Please, I’m not that organised.) So here we go with episode 3 of the DVD set, which actually aired second according to some sources... Anyhow, no matter – it’s not like Lost, where as long as you watch it all in order it all makes perfect sense. No, Door Into Darkness presents four different stories, and this one’s called Eyewitness.

Straight off, let me point out that many of Eyewitness’s plot elements probably seemed a lot fresher back in 1973, before three decades’ worth of TV actresses played murder witnesses in three decades’ worth of TV movies, and subsequently found themselves in various degrees of TV movie-permitting peril. Here, it’s Marilù Tolo playing housewife Roberta Leoni, whose life is so dull and empty she spends most of her time dressing up in outfits that match her stylishly mod furnishings: 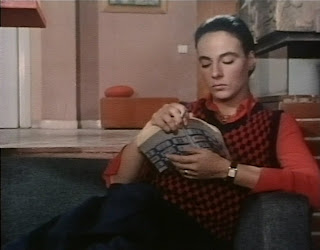 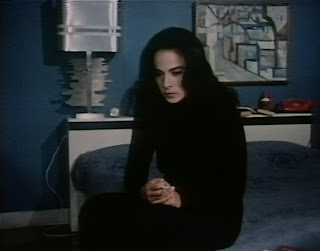 All that’s about to change, however, because soon Roberta will be on high terror alert after a woman runs out in front of her car in the middle of the night and drops down dead in the road. When Roberta gets out to help – being careful not to get any of that icky blood on her new orange flares (well, they do go lovely with the futon) – Mystery Woman turns out to have a bullet wound in her back. But that’s not all: Mystery Murderer is waiting in the bushes beside the road with a gun in his black-gloved hand... Run, Roberta, Run!

Luckily, there’s a diner nearby and Roberta has soon ordered a nice cup of coffee. Oh, and summoned the police. But when she takes the detective back to the scene of the crime, the body has disappeared – along with any trace of blood and, indeed, anything out of the ordinary. Has Roberta imagined it all? The police and her husband (Riccardo Salvino – sort of a better-looking version of Dario Argento, although with the same tombstone forehead and lanky hair) seem to think so, but we’re left in no doubt when a cutaway reveals someone suspiciously burning a pile of bloodstained clothes...

Ah, sweet, naïve, innocent Eyewitness, you had me gripped up until about this point, when you decided to turn into a decidedly mediocre stalker thriller. Roberta returns home to the now-ubiquitous ominous phone calls and half-hearted attempts on her life, while events slow-burn to a rather predictable conclusion. I know it’s not your fault, Eyewitness. You were probably once the hottest thing since open plan interiors: 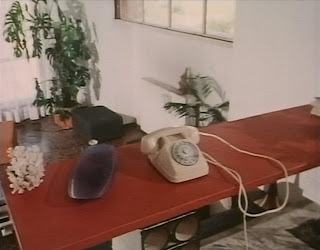 But now you’re more like this clock – dated and slightly pointless: 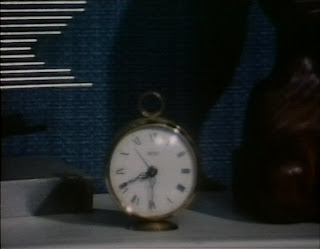 I mean, can you tell the time on that? Anyway, the plot of Eyewitness has become so standard that it really doesn’t offer much in the way of suspense or excitement any longer, despite the fact that it’s well staged and particularly nicely scored (by Giorgio Gaslini – Deep Red). I don’t want to make it sound like it’s a worthless waste of time – I’d recommend it unreservedly to giallo/Argento fans – but time hasn’t left Eyewitness with much to remark upon. Except, of course, those fabulous interiors.