Few phrases fill me with such glee as “TV Movie Terror Collection” – to my mind, the best thing you can find written on a DVD cover other than “Starring Roddy McDowall”. It’s certainly the best thing on the cover of Wild Eye’s DVD release of Shark Kill, the rest of which consists of a poorly PhotoShopped shark collage and some truly clumsy blurb-writing like “A horrible, flesh eating Great White shark invades a quiet coastal town”. (What? The actual town? Does it drive?)

Luckily, it takes more than an airbrushed mug shot of a toothy monster to put me off a DVD (hell, I watched Georgia Rule) so there was never any danger of Shark Kill escaping the gaping jaws of my DVD player. When I did put it on, however, I quickly noticed that something about the picture was a little, well, slanted: 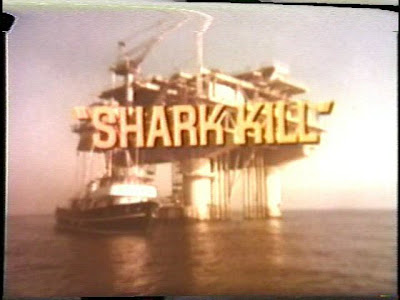 Quick-thinking as always, I wedged a thick book under one corner of the TV set, thus making the picture once again horizontal... although an unfortunate side-effect was that, during the ocean scenes, all the water tended to slosh to one side of the screen: 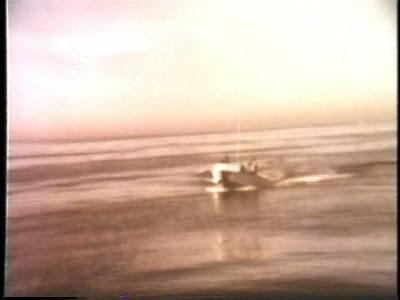 But you can’t have everything, anyway, and at least I managed to enjoy Shark Kill without developing a crick in my neck.

And enjoy it I did, because Shark Kill is a highly entertaining little film – not exactly the Jaws rip-off suggested by the cover but, at 75 minutes, a snappy drama-cum-suspense thriller with a tense, lost-at-sea climax that predates Open Water by almost 30 years.

Things get underway with some stock nature footage of about 45 different sharks swimming through the water. I don’t know if they’re all meant to be shots of the same shark – in fact, the picture quality is so poor I’m not even sure they are sharks – but we get the point: there’s a big fishy blob on the loose and it’s probably going to eat some screaming human blobs before the running-time is up.

Time to meet some of those human blobs who, as it turns out, work on the oil rig we saw under the opening credits. In particular, there are Mexican brothers Cabo and Luis, a pair of divers who’ve been sent down to find a pig in the underwater pipeline. Yes, it’s a little known fact that oil companies are plagued by infestations of pigs trotting up and down the... Naw! I’m just kidding you! A “pig” in Texaco terms is actually a kind of cleaning tool sent through oil pipes to unblock them. Anyway, this pig’s got stuck – but Cabo and Luis are going to find it and flush it out.

Or, at least, they were until some busybody turns up with a cry of “Sh-SH-SHAAAARK!”. It’s Rick, the company’s token white-collar worker, and he’s seen what he thinks is a great white in the area. Cabo and Luis pooh-pooh his suspicions and go ahead with the dive anyway. Not a good idea. Haven’t they seen Jaws III? Well, probably not, since it won’t be made for another few years, but the point is: diving anywhere near great white sharks is dangerous. And 3-D Jaws sequels are rubbish.

Anyway, sure enough, poor Luis gets chomped, losing several limbs and very nearly his life to the fuzzily-photographed predator. Lying in his hospital bed and dreaming of revenge, Luis pleads his brother to “get him for me” (meaning, of course, the shark) and so Cabo, along with anyone else in the vicinity who owns a boat, sets off to kill the monster...

There’s a very simple reason why Shark Kill worked for me, and I think it can be summed up with the simple phrase “murky underwater shots”. The film is full of them and, boy, do they freak me out. I don’t know what it is; I’ve never even been diving, but something about peering through the gloom fifty feet below the surface wondering if that dark shape in the distance is a shark or not just sends shivers right through me. And, thanks to the poor picture quality, Shark Kill pretty much triples the terror of the standard “murky underwater shot”. See... check these out... 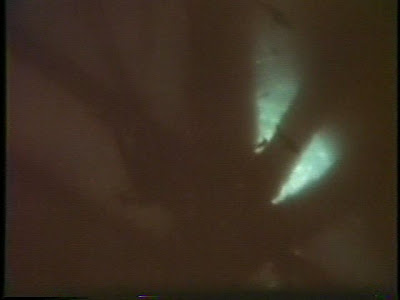 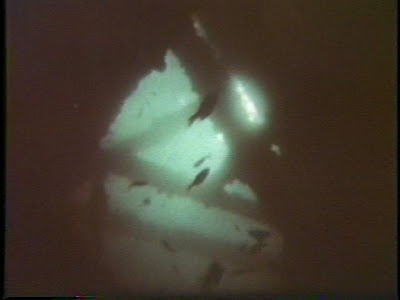 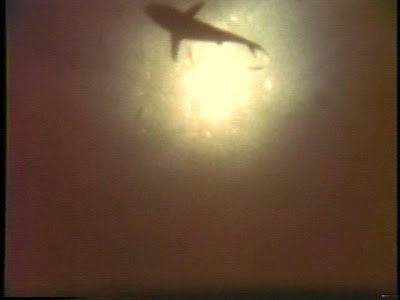 Argh! That last one had a shark in it!

Shark Kill also has a decent script. It’s a simple story, a fair potion of which actually takes place inland, but it holds the attention whatever it’s up to. Much of this is undoubtedly due to the characterization, which fleshes out even relatively minor characters like the male leads’ girlfriends and makes them interesting. The low budget gives everything an air of reality, and even allows for the odd great shot, like this chilling moment when we see the size of the shark compared to Cabo’s hunting boat: 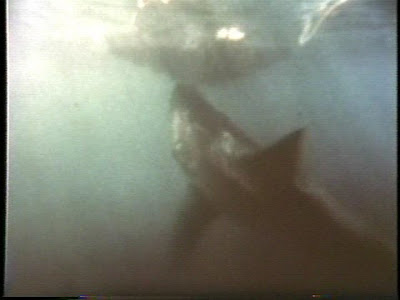 And perhaps I’m reading a little too much into things but – SPOILERS AHEAD – is it me, or does the last scene sail into some previously uncharted levels of homoerotic banter? Not only do our heroes both decide to leave their girlfriends, but they also sail off into the sunset together on “their” new boat chatting about all the fun they’re going to have fishing. Now, I’ve seen Brokeback Mountain... I know what boys in cowboy shirts get up when they say they’re going fishing, and all I can say is: when’s the sequel out? 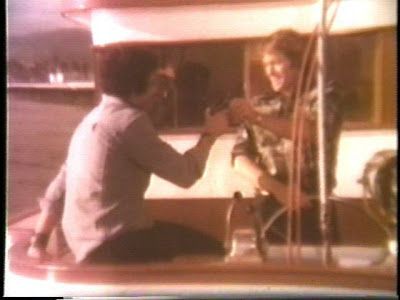 Okay, SPOILERS OVER... and so is this review, other than to give Shark Kill a well deserved:

This movie reminded me much more of Open Water than it did Jaws. I loved it. I too have a review of Shark Kill over at my blog. I loved your review and think you summed it all up perfectly!