There’s been Shark Attack, Shark Hunter, Shark Kill, Shark Swarm, Shark Zone... erm, Shark Attack 2... In fact, if you put the word “shark” in front of it, it’s probably been filmed. But one movie came before them all, and that movie was so pure, so raw, they just called it Shark. That, and the title was still available.

The year is 1969. We know this because all the sharks in the movie are played be real-life sharks, rather than special effects, and Burt Reynolds is still cool. He plays the single-named Caine (see? Still cool), a gunrunner stranded penniless in a Sudanese town after his truck blows up under the opening credits. Remarkably, he looks a bit like Seann William Scott: 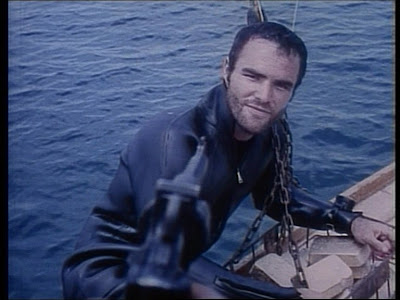 Unfortunately, since Seann William Scott has not yet been born, Caine can’t get any work as a stunt double – but, luckily for him, a local professor is looking for a diving partner since his last man was, unluckily for him, eaten by a shark. The prof is a little secretive about why exactly he seems so intent on exploring a sunken shipwreck, but explains it’s all to do with collecting “shark proteins”. Caine suspects it may have more to do with collecting sunken treasure, but takes the job nevertheless. It’s certainly a lot more convincing than the “Alzheimer’s research” excuse for the shark action in Deep Blue Sea.

You may be surprised to learn that, by this time, it’s over thirty minutes into the film. I’ve given you the bare skinny, you see. The straight dope. I think it’s time for a recap in order to see what else has filled this strangely uneventful first half-hour:

– Everything before the opening credits (which appear ten minutes in) is, admittedly, pretty cool. Shark is directed by rogue auteur Samuel Fuller (Shock Corridor, The Big Red One) who creates a striking and suspenseful opening scene in which the abovementioned former diver is savaged by a shark. It’s filmed in effective underwater silence with just the starkest of musical cues, and...

– All the sharks are real! And they’re not just nature footage spliced in, either. Shark gives us sometimes quite startling footage of divers swimming with the toothy terrors, as described in this onscreen dedication at the start of the film: 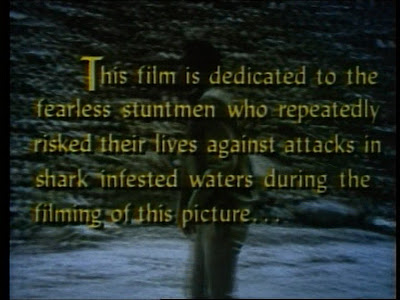 – Burt Reynolds rules. Yes, I know I’ve said this already but, in light of his later career choices, I think it bears repeating. Caine isn’t even a particularly appealing character in this film, but Burt makes you like spending time with him – which is important because, to be perfectly honest, not a whole hell of a lot happens in minutes 10 to 30 of Shark.

– We also meet Anna, the professor’s wife (and, if you read this as film noir at sea, the femme fatale of the piece). And there’s also a multitude of locals, including an alcoholic doctor, a kid Caine affectionately calls Runt, a hotel manager Caine less affectionately called Fatso and, well, almost too many others to mention. Sam Fuller really fills in the Sudanese milieu here (filming, naturally, in Mexico) and you have to give him credit for it, even if it’s not the blockbuster shark action you’re expecting.

At long last, the diving begins, the reasons for the professor’s excursions are revealed (you’ll be shocked... shocked!) and the double-crossing kicks in – all of which make Shark a fairly entertaining film. Famously, one of Fuller’s stunt divers was killed by a shark during production (really no wonder with some of the exploits on display) and this also gives the film a slightly disturbing edge. A shark attack towards the end is quite nasty – not that I’m suggesting it’s snuff footage (it’s PG after all) but you’ll wonder how they pulled it off. I mean, once those sharks start snapping, they really go for it! There’s also the moment where a fleeing diver quickly removes his scuba tank and throws it at an attacking shark... Quick-thinking, yes, but probably not recommended unless you’re in sight of the surface. 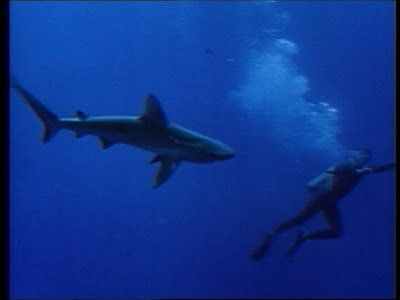 As well as the fish/human violence, watch out for a staggering amount of man-on-chicken violence too. If it’s not the Chief of Police bashing a defenceless cockerel in the beak, it’s good old Burt himself, in a moment that has to be seen to be believed, swinging the legs of a small boy into the path of a peaceful chicken and sending it flapping out of the frame. If there’s ever a sequel, I fully expect it’ll be the birds that come back for revenge, rather than the sharks. And, as far as I’m aware, the title Chicken is still available.