Horror That Made Me #4

Methinks it’s time to draw the strands of “Horror That Made Me” back together in order to finish the series off properly...

Now, if you’ve been regularly playing Brain Trainer® on your Nintendo DS – thus keeping your memory sharp and reducing the risk of aneurysm – you may remember I’ve been counting down the ten most influential movie experiences on my horror-loving psyche. If, however, your brain has rotted away due to an unhealthy lack of video games, here’s a little reminder of the films I’ve picked so far (sponsored by Nintendo DS):

That’s right; there’s been Hammer Horror, 1940s melodrama, TV movies, Italian horror and a heavy 80s bias, all of which brings me to the most recent entry in my countdown: John Carpenter’s criminally underrated... 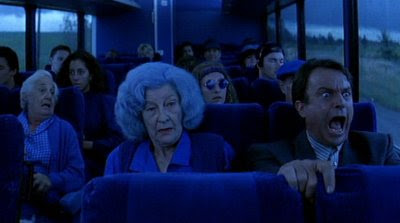 Quite simply, I don’t think there’s ever been a more successful post-modern horror film than this well-kept secret. In the Mouth of Madness is a film about reality giving way to fiction, creating in turn a new reality (or lack of!) – which, if you think about it, is how films themselves work, taking you out of your own reality into something unreal, which then affects your subsequent reality.

It’s the story of John Trent (played by a better-than-usually-cast Sam Neill), an insurance investigator probing the disappearance of famous horror writer Sutter Cane... Is it a publicity stunt for the author’s new novel or something more sinister? I’d put my money on “sinister” if I were you because, before In the Mouth of Madness is over, you’ll have seen all manner of monsters, violent acts, rips in the fabric of reality and, basically, the end of the world as we know it – all culminating in a shocker of an ending that’s easy to dismiss as a jokey punchline but which actually gets more and more disturbing the more you think about it.

The movie’s Lovecraft influence is obvious but it’s ultimately a John Carpenter story through-and-through, rounding out his self-proclaimed “Apocalypse trilogy” (begun with The Thing and Prince of Darkness) in fitting and spectacular fashion. I can’t think of another narrative that falls apart so violently whilst also remaining so satisfying and clever. In fact, to this date, I rarely start to watch a horror film without a small part of me wishing that somehow, somehow it’ll go as far as In the Mouth of Madness does... and wondering what it would do to me if it went further.

Lesson learned: Horror goes mad and takes you with it.
Posted by Ross Horsley at 22:43

I love In The Mouth of Madness. It's one of the few horror movies that has actually scared me! And Sam Neil is great in it.

I'm a big Carpenter fan, but have found it hard to fall in love with this movie mostly because it's so unlike Carpenter. But I should like it for that reason. I bought it last October to watch it again, but have yet to.

By the way, you've been tagged by me. Check it out at lazyeyetheatre.blogspot.com

Prince of Darkness is my fave Carpenter film. I haven't been able to get through this one, but where you wrote "Lesson learned: Horror goes mad and takes you with it," sold me. My boyfriend quite likes this movie, so I bet I could get him to sit through it one more time! Thanks for the reminder!!!