I knew it was coming... You knew it was coming... The three-hour, killer-sharks TV movie event we’ve all been waiting for... Finally, Shark Swarm swam into my possession recently after months of anticipation on my part, and so I wasted no time in Frisbee-throwing it into the DVD player (I’m quite talented in that respect) and getting my sharky groove on.

Yep, I’ve no idea whether or not it actually aired on the Hallmark Channel, for which it was apparently made, but Shark Swarm is definitely out there on DVD in all its John Schneider/Daryl Hannah glory – although not in the UK, unless you visit a car boot sale Amazon Marketplace. But is it any good? Does it live up to those feverishly high expectations? Of course it fucking does! It’s got killer-fucking-sharks in it! (And Elisa Donovan – who knew?!) 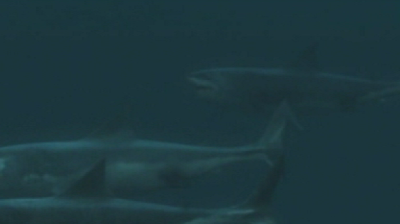 First of all, I’ll make no apologies for the plot of Shark Swarm, which is undeniably the single most generic effort you could ever ever ever imagine. In fact, I’m sure the James Van Der Beek/giant squid movie Eye of the Beast, which I also saw recently, had the same story. There’s toxic waste in the water; fish are dying; fishermen are starving; sharks are mutating; Daryl Hannah’s making another comeback bid; a millionaire tycoon is buying up all the town’s property for nefarious reasons; shark attacks are on the rise... and yet those town officials just won’t close the beaches. Won’t they ever learn? Shark attacks = people dying = sequels = more shark attacks. It’s a vicious circle, with a vicious killer shark at the centre of it. Grrr!

But Shark Swarm’s strength is that it makes all this entertaining. I can honestly say I never got bored once during the three-hour running time, which is more than I can say for all the Shark Attack movie clones that generally clock in around 85 minutes. How do they stretch Shark Swarm to three hours? Well, not with anything new, that’s for sure. Instead, they simply chuck in at least two of everything: John Schneider has a brother and a daughter who both have matching romantic subplots (not with each other – eww!). There’s also two villains: the millionaire (played by a mincing Armand Assante) and his equally despicable thug. Heck, even Schneider’s elderly mother has a subplot, culminating in an outrageous scene where the swarming sharks attack a mass baptism ceremony in the bay. 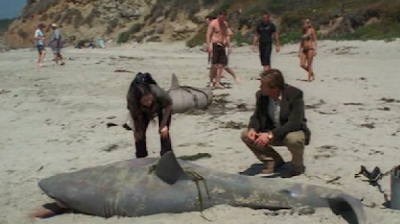 Which brings us to the body count, which I read somewhere is in excess of forty (I lost count), mainly comprising random scuba divers, who keep showing up, keep getting eaten, and keep going unnoticed. (Seriously, I don’t think anyone’s mysterious disappearance/grisly death makes the news in this town, despite the fact that they have a local radio station constantly playing in the background.) The attacks themselves aren’t bad, either. Of course, this being a TV movie, they’re mainly of the red-dye-in-the-water-and-little-else variety but there’s some effective chomping achieved with a not-bad mixture of CGI and plastic shark-heads. I also found that, while the shots of CGI sharks racing each other around aren’t particularly menacing, the shots involving sharks emerging from the shadows to drag people away are quite creepy. But that might just be me.

Ultimately, Shark Swarm is leagues above Spring Break Shark Attack and just about any other similar movie (and there are plenty) you’d care to mention. AiP says chow down!

Yer Back! Brilliant. Been waiting for your return. And with a review of Shark Swarm no less. A movie I (and I'm a big Shark man) never heard of. Well after your strong review (4 out of 5) and claim that the sharks are fucking awesome - I will have to check it out! Welcome back Ross.

Thanks guys. Maybe I've been a tad generous with my 4/5 rating here but I couldn't help it... Shark Swarm buttered my bread on both sides.

Awwww, I LOVE Spring Break Shark Attack. I liked Shark Swarm, and know one of the writers of it. Not well, but he was happy to know I was a shark movie nut! I watched this on Hallmark the night it premiered (with pizza and all the fixings!). It was fun, and reminded me of the ol' Made for TV days that I miss so much!

I actually just wrote this article on Shark Movies

Not sure that was proper etiquette, but there you go!