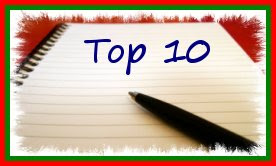 I’m making a list, I’m checking it twice... Yes, it’s the top horror of 2008, according to Anchorwoman In Peril!

10. APPARITIONS: Here’s an outsider to start with – the BBC’s recent six-part horror/drama serial about a Catholic priest turned reluctant exorcist (played by Martin Shaw). Yes, it was slow and, yes, it was sometimes silly – but how often does prime-time TV basically amount to a slasher movie with Satan as the killer?

9. DIARY OF THE DEAD: While not as epic in scope as Land of the Dead (or, really, as jaw-droppingly brilliant as any of Romero’s previous zombie outings), Diary still delivered. (Full review here.)

8. WHILE SHE WAS OUT: A classic woman-in-peril TV-movie plot is beefed up with extra (and I mean extra) gore, plus Kim Basinger and a Christmas-time setting... I’m sold! (Full review here.)

7. THE RUINS: Scott Smith’s adaptation of his own novel (which was fantastic, by the way) made Stephen King’s list of the 10 Best Movies of 2008, and who am I to argue? Truly nasty stuff.

6. DUMA KEY: And, speaking of Stephen King, his most recent novel was a fine return to form, and one of his most purely enjoyable ghost stories.

5. THE MIST: Sheesh! It’s King again! This adaptation of his open-ended novella came out in the US last year but didn’t arrive in the UK until March. It was definitely worth the wait, however, as it quickly became one of my favourite monster movies ever.

4. MOTHER OF TEARS: Yep, I’m aware that this list seems to be revealing me as a slavering fanboy but I really DID enjoy the poorly-received final part of Argento’s Suspiria trilogy – at least on the level of a wild fantasy-adventure filled with Dario’s unique imagination.

3. INSIDE: This French film is what people are talking about when they describe a horror movie as “extreme”. It’s a nightmarish scenario that just... keeps... getting... worse! Gruellingly spellbinding.

2. THE MIDNIGHT MEAT TRAIN: After being buried by its distributors in the US, I almost couldn’t believe it when this Clive Barker adaptation got a cinema release in the UK, and I’m glad I didn’t miss it. Brutally gory set pieces mix with black humour and dingy mystery to produce an unusually original horror film.

1. DEAD SET: Big Brother + zombie apocalypse = modern British horror at its best, all the more surprising (and effective) for having been made for the small screen. Definitely recommended to anyone who enjoyed Shaun of the Dead or 28 Days Later, and the year’s horror highlight for me.
Posted by Ross Horsley at 07:13

While I did like The Ruins, Dead Set, Inside, and The Mist, i've gotta argue with Diary of the Dead and Mother of Tears. Those movies totally sucked, in my opinion. Surprised anyone liked them quite frankly!

Did you see Let The Right One In?

Yay! I got Dead Set for Xmas!

I liked Mother of Tears myself. It was just so friggin' chaotic and fun!

I just saw the Mist last night and have to say I found it disappointing. I NEED you to write a review so we can discuss... I didn't hate it, but it ended up just being meh for me...

Gonna argue with DotD and MoT, but you have convinced me to seek out Dead Set.

Here in the States, Dead Set and [REC] are pretty hard to come by, so a Yank looking for a zombie verite fix could almost be forgiven for liking Diary. A Brit, though? Sigh. It is to weep.

I'll say this, though--when George Romero goes CGI, he actually taps its potential instead of just using it to save money. My only concern going in was the lack of practical FX and that ended up being the only thing about the movie that didn't bother me.

That sounds awesome and I doubt it works broken up into YouTube chunks the way Dead Set does.

Yeah, I'm willing to accept that DOTD may be a bad call, but what can I say? It caught me with my defenses down and I enjoyed it. The Mist is a love-it-or-hate-it deal from what I gather, and MOT...? Well, I think mostly everyone hates it, but those (like me!) who found it fun just rolled with the chaos, as Amanda expertly put it.