Way, way, way before the craze for stalker movies (well, 1977) a middle-aged Witchita woman received a string of taunting threats by phone and post from a sinister criminal the police dubbed “the Poet”. Twenty-one years later, along came the TV movie version of her Lifetime-baiting true story, which starred Mare Winningham in the lead role and was entitled Little Girl Fly Away.

There’s a reason for that perhaps strange-sounding title (later changed to the more straightforward The Stalker) but before we get into all that, let’s play a quick game of “Complete The Threatening Note!”. I’ll give you the first few lines of one of the Poet’s endeavours and all you have to do is pick the missing lyric. Ready?

Hmm, I think the author just scrapes by with that “poet” nickname, personally, but the answer is, in any case, A – although C would’ve been far more threatening, don’t you think? Let’s try another!

Yep, the answer’s A, somewhat disappointingly. Apparently, Cathy was attacked and “branded” by a sex offender back when she was a teenager. I think C would’ve been much scarier. The Poet really missed a trick there! One last one:

It’s a toughie, I know, but the answer is... A again! It doesn’t even rhyme, does it?! Quite frankly, I would’ve made a much better deranged literary stalker myself – as would you if you picked all C’s. But we can’t all be sadistic geniuses, can we, and this is a TV movie after all.

Now, it’s not a major spoiler if you’re in any way familiar with the real-life case of the Poet, or the book this movie’s based on, but it’s something the film chooses not to reveal until halfway through. And that’s the fact that ... SPOILER ALERT! ... Cathy, the supposed victim, is herself the Poet. That’s right: she’s stalking herself – composing the scribbled notes, leaving a jar of urine on her own doorstep, stabbing herself with a knife and, at one point, even going so far as to go missing from a local mall, only to turn up bruised and battered many hours later, having been “kidnapped”.

So why is she doing all this? And what’s with the “Little Girl Fly Away” stuff? Well, it’s not just a case of drawing attention to herself, nor was it diagnosed as multiple-personality disorder; the second half of the movie deals with Cathy’s quest to understand the motives behind her behaviour with the help of a therapist (played by CCH Pounder). I’ll not spoil it all here but, as you might expect, the roots of her problem go back to her childhood. 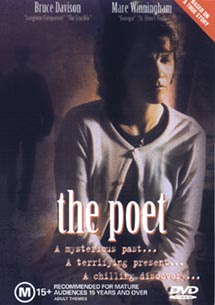 Yet another title this movie goes by

The Stalker is filled with good actors. Mare Winningham makes the slightly frumpy, unlikely victim role her own, with Bruce Davison sympathetic as her bewildered husband. If you’ve ever wondered what a psycho-stalker movie would be like with a middle-aged couple at the centre instead of a glamorous TV anchorwoman played by Morgan Freeman, well, there’s clearly something wrong with you, but the good news is: this is the movie for you. Anne Haney plays it cool as Cathy’s distant (suspicious?) mother, while Clayton Rohner (still displaying signs of hotness) is a cop on the case who suspects that the Poet is someone Cathy’s been having an affair with. Finally, there’s CCH Pounder, who’s so white-hot I’d happily fake mental illness just to have her as my shrink.

Despite its (new) title, this is a long way from being a thriller, but I still found it pretty gripping – more so, in fact, than some outright thrillers. With that cast, a decent script and a touching final scene, can The Stalker really be blamed for the fact that the most lasting impression it leaves is the mental image of Mare Winningham peeing in a jar? I think not.

I had forgotten that Clayton Rohner was in this. He ended up playing the cop A LOT for awhile it seemed.

I saw this movie... on Lifetime... a few years ago and enjoyed it. It's kind of a sad story and I agree it's mistakenly marketed as a thriller.

The way you feel about CCH is the way I feel about Bruce Davidson. So amazing.