This review was originally published on the now sadly defunct Retro Slashers website on 21 October 2009. I'm archiving it here at AiP for the sake of all humanity...

You have to hand it to Amsterdamned – it’s got one hell of a gimmick. By 1988, the slasher genre had given us killers who hid their faces behind hockey masks, gas masks, clown masks, William Shatner masks, owl masks, pillow cases, chunks of stitched-together human skin... It was only a matter of time before one came along in full scuba gear. But Amsterdamned’s killer isn’t just in it for the Lycra and heavy-breathing. He (or she!) actually swims around the canals of Amsterdam, popping out to drag victims to a watery grave! Yes, you read that right. There is popping, there is killing, and there is also a giant knife in case the victims aren’t in the mood for a dip.

Amsterdamned is basically a Dutch giallo, but one that’s as much informed by slashers as it is Italian sleaze. As the murders mount up via a series of violently effective, Jaws-like set pieces, Detective Eric Visser (Huub Stapel) is called in to catch the underwater killer. Visser gets results – he’s the kind of cop who jumps out of his car when stuck in traffic and thwarts a hold-up in a pastry shop (this is Europe) before getting back behind the wheel and driving off. He also looks a bit like Greg Evigan and has a smart-mouthed teenaged daughter who, in a genius subplot, is tracking the killer herself, with the help of a psychic friend. It’s all terrifically fast-paced, being mainstream enough to appeal to thriller fans but just perverse and nasty enough to satisfy slasher aficionados (check out the killer’s souvenir-stocked lair, as well as the final gruesome reveal of their identity).

Fittingly, it’s also swimming with red herrings, the most devious of which is a psychiatry motif that calls the sanity of a number of characters into question. Dozens of startling stunts, seemingly performed in real-time, lend a genuine sense of danger to the proceedings – none more so than in the first of the movie’s two climaxes, which famously finds cop and killer tearing around the tight waterways of the city in speedboats. The second, equally effective final sequence brings Amsterdamned back to its slasher roots with an unbearably tense bit of hiding-from-the-killer on the part of the film’s final girl. 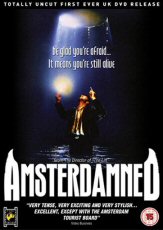 For anyone wishing to pick this up – and you should be – the UK’s Nouveaux Pictures/Cine-Excess label has recently released a fine region 2 DVD, featuring an uncut widescreen transfer (the previous UK release on video lost a few seconds of a knife appearing between a girl’s legs) and a front cover that makes it look like a UFO movie. Special features include a nice making-of documentary from the 80s, but best of all is that fact that you can choose from the original Dutch language track with English subtitles or an English dub. The latter has taken some criticism for that fact that many of its actors speak with a sort of vaguely Dutch accent, but I consider it one of the best and least distracting dubs I’ve ever heard (in fact, I even forgot I was watching a dubbed version at times). Either way, with both language options available, everyone should feel catered for. The fear-soaked Amsterdamned is definitely one to splash out on.