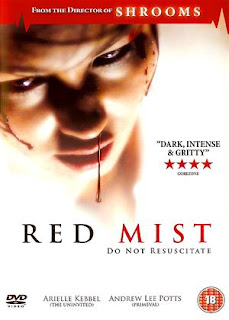 Here's another review rescued from the depths of the Deep Web... originally published by Retro Slashers on 22 July 2009.
I never thought I’d live long enough to see a remake of Aenigma – Lucio Fulci’s blending of Carrie and Patrick, which featured killer snails and death by Tom Cruise poster. But that’s essentially what the recent British horror Red Mist (known as Freakdog in the US) is, albeit one that’s short on molluscs and big on Jason Goes to Hell-style body-hopping.
The premise is simple: What would happen if you inadvertently sent a mentally retarded hospital janitor into a coma when a hastily organized prank designed as retaliation for a blackmail plot went wrong, only to discover that secretly injecting him with an untested wonder-drug gave him the ability not only to astral-project into the bodies of your friends, but also to stalk and kill your friends in a variety of gruesome ways while seeking misguided revenge for a crime you weren’t entirely responsible for in the first place?
Yes, we’ve all been there, and in Red Mist it’s the turn of junior doctor, Catherine, played by highly likeable Katherine Heigl-a-like, Arielle Kebbel, who’s since gone on to star in the uninvited remake of A Tale of Two Sisters (itself called The Uninvited, aptly enough). Since it’s not until the halfway point that Catherine actually gets handy with the hypodermic, it’s a bit of a wait before the horror kicks into high gear but, with car-door head-slamming, forced acid-drinking and naked stomach-slicing in the middle of a busy nightclub, it’s certainly worth it.
What’s less attractive is the last-act lull, which puts Catherine in a very reactive (as opposed to proactive) position and, in these post-Sidney Prescott days, means she doesn’t quite cut it as a top final girl. That’s not to say the movie peters out, though; in fact, it all ends quite satisfyingly – especially in comparison to director Paddy Breathnach’s previous horror effort, the hallucination-themed Shrooms, which didn’t so much peter out as flatline during an epileptic fit of meaningless, are-they-tripping-or-not jump scenes.
Breathnach is Irish, and you’ll remember I described Red Mist above as a British film, which it is despite being set in America. With a couple of exceptions, it appears the cast is a mixture of English, Irish and Scottish actors, all valiantly attempting American accents with differing degrees of success. The movie, too, is a tag-team of styles and subgenres, mixing the morbid medical school hijinks of Pathology and Unrest with torture scenes, guilty drama, and supernatural slashing. It’s as the latter it delivers most wholeheartedly, however. That, and as a gory Aenigma variation.