Seventies horror film The House on Skull Mountain doesn't seem to draw much praise these days, other than for a clever recreation of Charles Allan Gilbert's visual pun, All Is Vanity. But here are three more great shots that gave me pause -- or at least made me press pause. (Also includes spoilers!) 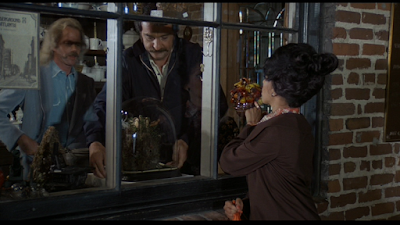 The sequence where Lorena and Andrew scoot into town for a somewhat inappropriate cousins-in-love musical montage comes off as a bit of a mood-breaker, considering it's also one of the few set outside the ol' mansion. But this layered composition rescues it for me. Dried-up old terrarium thingies -- like the one Andrew picks up in a shop here -- are a major motif in the film, their glass domes and murky contents representing the deathly bubble the characters find themselves trapped within. And what do the couple do after their morning of happy-go-lucky freedom? Buy themselves another little trap, of course -- a queasy reminder of the inescapable evil surrounding them. I also like that Lorena watches the transaction from behind yet another layer of glass... Is the real trap inside or outside the bell jar? Shudder! 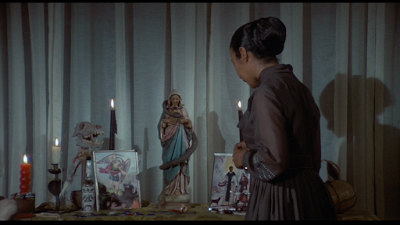 Snakes appear throughout Skull Mountain (even inside a terrarium at one point) but, most notably, coiled around the vertical wooden posts in the subterranean voodoo den. This kind of snake-on-a-stick treat also goes by the name of the Rod of Asclepious, a Greek symbol associated with medicine and health care -- and also resurrection. In this shot, Harriet stumbles over a shrine riddled, as shrines tend to be, with religious imagery. The centrepiece is a Virgin Mary figurine wearing a not-so-feathered boa (of the constrictor kind), which conjures up all kinds of associations with resurrection and the return from the grave... all of which very nicely foreshadows the climactic reappearance of Mrs Christophe, whose death set the story in motion. 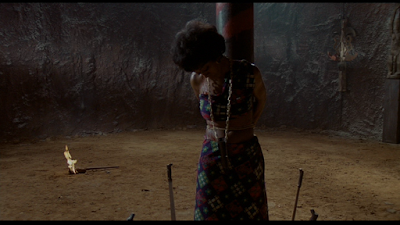 Finally, notice the machetes stabbed into the ground around the body of poor Louette at the film's climax. I don't think we see how they get there but what they do achieve is a neat reference to the Eight of Swords tarot card. (I know we're four blades short but this sort of symbolism doesn't happen accidentally.) The Eight is a card of hopelessness, helplessness and fear, and dealing it out at this point marks the grisly fate of one character and the agonizing powerlessness of another -- the scene's main protagonist, Andrew, who's forced to stand by and watch it happen.
A bit of a cheesy film, perhaps, but with its rich symbolism of death in the Deep South, Skull Mountain is well worth another visit.
Posted by Ross Horsley at 11:44