Wow, now here’s a slasher movie from the golden age of 1980 that fills me with that fuzzy feeling... How fuzzy exactly? Well, when I tried to take screen caps for you, the image quality was so fuzzy that it somehow bunged up my hard drive with all its... fuzz, and caused it to crash. So, instead, I’m afraid you’ll have to make do with a rough approximation of New Year’s Evil’s general fuzziness, as performed by an American Fuzz Lop rabbit: 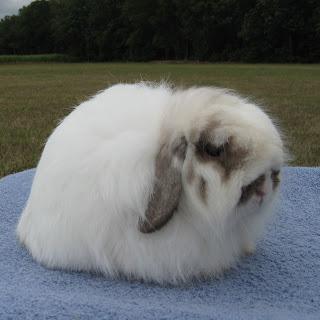 Thanks, Mr Fluff. And, since New Year’s Evil has yet to be released on DVD, this is probably the kind of picture quality you’ll encounter if you manage to get hold of a copy (mine came from eBay)... although something in me suspects it’s never going to be a movie that gets a digital remastering. And, to be honest, it’s no great loss, either. Even the rabbit agrees.

If I were a proper blogger, I’d probably be reviewing this on New Year’s Eve or something (y’know, like when I reviewed the Christmas-themed Silent Night, Deadly Night on, er, January 6th). Why? Because it’s a “holiday slasher” in the grand tradition of Halloween, Friday the 13th and friends, using its chosen date as a hook on which to hang the horror. Or, in this case, lack of.

As Justin Kerswell points out at Hysteria Lives!, it’s hard to describe the plot of New Year’s Evil without inadvertently making it sound much better than it actually is. Arriving early in the 80s slasher cycle, it taps into the Laura Mars trend of casting middle-aged women as media personalities stalked by psychos (see also A Stranger Is Watching, Visiting Hours, The Fan etc). Here, it’s music show presenter Blaze (played by Roz Kelly) who’s hosting a New Year special of Hollywood Hotline, an über-cheesy showcase for some really middle-of-the-road punk rock. (One particularly edgy song is called “Dumb Blondes” but, due to the slightly dodgy audio, I was convinced they were singing “Don Knotts”... Now there’s a new-wave rock classic in the making!) 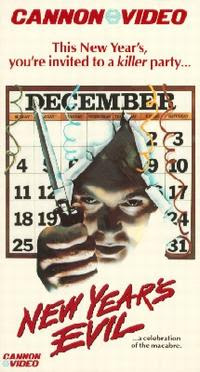 During the show, Blaze receives a phone call from a man calling himself “Evil” – or, to be strictly accurate, “EEEEEEvil” – who calmly outlines his intention to kill an innocent woman every time the clock strikes midnight across the various time zones of America. That’s right... as New Year arrives in New York, a-killin’ he’ll be, and the same goes for Chicago, Aspen and, eventually, at the TV studio in L.A., where Evil has plans for Blaze herself...

I unfortunately misunderstood this as a plan to carry out each murder in its related time zone, leading to all kinds of unfulfilled expectations of Evil hopping on private jets and flying breathlessly between crime scenes, but this was sadly not to be. Instead, he sticks to the rather skanky-looking back streets of Hollywood – although, thanks to the intervention of a gang of vengeful bikers when he accidentally runs over one of their number, it’s not all uneventful.

Throw in a subplot involving Blaze’s grown-up actor son – who’s bitter, twisted and sitting in a hotel room watching the show with a red stocking over his head – and you have what sounds like a pretty fun gimmick-slasher. Unfortunately, it’s mostly just dull. The fact that our final girl, Blaze, is such a self-absorbed and unappealing personality really doesn’t help – so much so that, by the time Evil catches up with her, I was half-hoping he’d finish her off before she had time to introduce another dismal punk band. But no... just more bad songs, a dash of blood here and there, and the sinking feeling of a decent premise being completely squandered.

That said, there are scenes that work, my favourite being a marginally tense sequence that starts with Evil seducing a girl in a nightclub with the promise of a “command performance at Erik Estrada’s house” and ends with him smothering her so violently that his fake moustache comes seriously unstuck. Luckily, she does last long enough to deliver the classic line: “When a girl doesn’t have a date on New Year’s Eve, she’s in Shit City!” Quite.

There’s also a Friday the 13th-esque soundtrack, consisting of a whispered “hahh-hahh-hahh” during the suspense scenes, sometimes elevated to an all-out sneezing sound that leads to a few confusing moments as you wonder if someone hiding in a nearby closet has accidentally revealed themselves. And, speaking of revealing themselves, the revelation of the killer is quite effective – although less so his motives. When asked by Blaze why he did it, he snaps back, “I’m fed up!”... By the end of New Year’s Evil, so was I.

Awww, I adore this movie. Truly I do. It's a slasher I watch often. I agree, it's not great, but as a time capsule of LA in the post-punk music scene it does capture something. That scene at the beginning with the cruising kids is just incredible. I too, have written a review at Pretty Scary. I got all kinds of love for this movie.