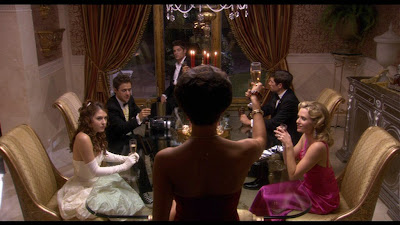 Well, I did it. I saw the so-called remake of April Fool’s Day – “so-called” because it bares almost no resemblance to the 1986 slasher. Is it as bad as you may have heard? No. Should you bother watching it? No.

Over at Final Girl, Stacie Ponder marvels at “the studio reasoning that dictates ‘changing the content completely but keeping the title and calling it a ‘remake’ is way better than creating something entirely new’, because that makes absolutely no sense to me”.

I have to admit, however, that it’s starting to make sense to me... After all, would I have watched April Fool’s Day 2008 if it had simply been called something like April Fool and professed no link with one of my most fondly remembered 80s slashers? Would we even be talking about it right now? I doubt it. This tacky, low-budget April Fool would just have been one more DTV slasher to add to the bargain bin, and barely caused a ripple throughout the horror community.

Instead, I found myself waiting for April Fool’s Day with – if not quite bated breath – then breath that was certainly minty-freshened and ready in anticipation. So how did the date go?

Well, some reviewers have claimed that April Fool’s Day 2008 is more like a remake of I Know What You Did Last Summer than the 1986 original. They’re wrong. It’s more like a remake of one of those bad, straight-to-video sequels to Cruel Intentions that came out a few years back. Privileged debutantes spend the first 25 minutes bitching behind each others’ backs, before a prank eventually goes wrong and someone gets killed. From there, it’s a cheap-looking (and again overlong) TV news report describing in detail everything we’ve just sat through before the story even gets off the ground.

When it does get going, the pace is surprisingly relentless – which is doubly amazing when you consider the whole thing’s masterminded by the Butcher Brothers, whose previous outing, The Hamiltons, was an interesting idea all but killed by leaden plotting. Even so, it still looks shoddy, completely lacks the original’s sense of macabre fun, and collapses in a heap at the end, exhausted yet unfulfilled, and daring you to reassess its pre-twist plot-points in a way that might make any sort of sense.

Ultimately, my favourite assessment has to come from John at Retro Slashers, who remarks: “I started trying to write a level-headed look at the April Fool’s Day b-movie remake and realized I just couldn’t. What’s there to review? Crap, it’s crap crap crap”.

Gotta agree with you, John.

Thanks for this, as usual, insightful review. I am sure I'll catch this at some point in the near or distant future. I love the original (saw it in the theater twice when it came out) and years later (during my formal film education) began to appreciate its baroque narrative even more - as it was a fine aggregate culmination of the slasher genre.

Few remakes impress don't you think? Although, I have to admit, and maybe I'll set up a blog entry about this, The Omen remake (which had me disgusted after seeing the trailer) actually did impress me for various reasons. I thought I was going to hate it but in fact I respect it in certain ways. I had dinner with English actress Eilzabeth Sheperd from Damien: Omen II last night (she played Joan Hart) and she and I had some FUN conversations! She was LOVELY!

Great review. Yet another movie I feel I can skip. I love how they are called The Butcher Brothers. That's just silly.

I am slightly distressed at how women talk to each other in movies and on TV these days. If it's not constant sex talk (ala Sex & the City) then it's just unheralded bitchiness. Young girls see this and think they are supposed to be talking like this. It's lame and it's boring. Likeable characters always trump assholes.