Here’s one that slipped off my radar for a while. After seeing Perfect Blue during its original cinema release back in 1999 – and being thoroughly confused by its twisty plot – I decided to give it another go on DVD, seeing as how (a) there aren’t many other animated slasher movies out there (in fact, are there any?) and (b) the whole “Japanese pop star turns actress/gets stalked” theme has a nice whiff of Anchorwoman In Peril about it. So, has the intervening decade brought new resonance to Perfect Blue? Have I matured enough in the meantime to fully understand its psychological intricacies? And where did all my hair go?

First off, I will say that Perfect Blue has a pretty perfect sense of what the internet is and how it actually works... which is no mean feat for a film made in 1998, when movies tended to portray surfing the net as if it were something out of The Matrix. The Web isn’t a huge part of Perfect Blue, but it has an important role to play and comes across refreshingly realistically. In fact, the entire world of the movie is one of inescapable pop culture, with a backdrop of bubblegum pop music, cheesy detective dramas and voyeuristic websites that seems, if anything, even more spookily relevant ten years down the line. How does our main character, Mima, fit in? 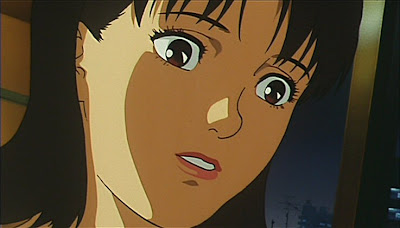 Mima is a singing starlet with the three-girl pop group, CHAM. Or, at least, she was. Now, she’s branching out into a hopefully more lasting career, playing an emotionally disturbed character on a TV soap opera (this is what it’s referred to in the film, anyway; it actually seems more like a cop drama – perhaps a Japanese genre without a western equivalent). But the more Mima immerses herself in her new career, the more she finds herself haunted by what seems to be a ghost of her former self. For real! An actual entity that looks like her, talks to her but can’t be real... can it? Not only that, but she’s also being followed by a very creepy-looking obsessed fan, who sends her scrawled faxes calling her a traitor. Plus, her managers are pushing her into ever-more-explicit storylines at work, involving gang rape and increasing emotional trauma. Pretty soon, she’s starting to crack up herself – and not with laughter.

This is where you’ll either go with Perfect Blue, or just get left behind. Because, as Mima loses her grip on reality, so does the film, and it’s not long before the fractured narrative would give even Brian De Palma a headache. Having said that, thanks to TV shows like Lost and Damages, we’ve become increasingly familiar with non-linear storylines, so this might even be another case of Perfect Blue predicting future trends. Yet, for a large chunk of the second half, you’ll likely have no idea what’s going on, as the plot offers several conflicting explanations (at least one of which is quite appealing) before snatching them away, twisting them around, and throwing them back at you in a series of dreams, hallucinations and fake endings. 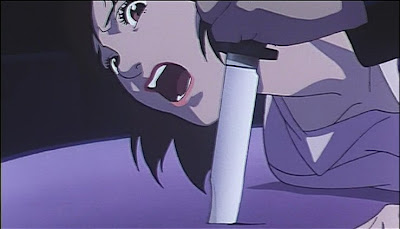 Thing is, if you manage to stick with it – without throwing your remote at the screen after your latest perplexed rewind – Perfect Blue eventually comes together quite cleverly. Or, at least, it comes up with an ending that slots the preceding shards of chaos into a reasonably attractive mirrorball effect. The final double-climax is an absolute treat for slasher fans, as Mima battles several adversaries across a striking range of landscapes.

Which leads me to a question: Would I have enjoyed Perfect Blue more as a live-action thriller, rather than an animated one? You’ll notice in the previous paragraph I referred to “battles”, “adversaries” and “landscapes” – all computer game terms I used almost before I realised, perhaps because the film, in its animated artifice, has an unreality, a videogame like quality to it that, for me, chipped away a little at its style. I’m not saying it spoils it; the characters are as strong as any you’d find outside Manga and the animation is often beautiful, capturing a sense of urban loneliness (and danger) that’ll stick with you long afterwards. But it also left me with a feeling of potential – like it would make a great live-action movie, something truly classic. Most tellingly of all, however, I was planning to sell the DVD of Perfect Blue (at Computer Exchange, perhaps aptly) but I didn’t in the end. I kept it. Because I suspect that someday I’ll want to revisit its frustrating, fractured but often beautiful and unsettling world.

I checked this film out in college and I remember being equally frustrated and entranced. After several years I'd forgotten why I liked it, until I read your review. Before that I mostly remembered how much my head hurt from watching Perfect Blue.