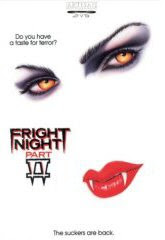 Funny things, DVDs. One minute you’re being told they’re quickly becoming obsolete, already well on the way to being replaced by Blu-Ray discs; the next, you see Fright Night Part II on sale at Amazon Marketplace for £118. And that’s not even a widescreen print, never mind digitally remastered. You’d be as well off watching your old videotape.

Grinding my teeth at the memory of once passing over Fright Night Part II for £7.99 in a second-hand shop, I give you a list of valuable horror DVDs (some of which I actually do own – yay!). Bear in mind, too, that these aren’t just silly prices for out-of-print collector’s editions, but they represent the only legitimate ways of seeing the films in question on DVD.

First up, it’s slasher movie sequel Slumber Party Massacre II – a snip at a mere £60, but rising to a potential £193 if that first copy sells anytime soon. Admittedly, the film itself is genius (and thank God I own it because, when you get that itch for a slasher-musical, there’s little else to scratch it with) but it’s a high price for a film that’s shown fairly regularly on UK digital channel Zone Horror. If you want to complete your Slumber Party trilogy, you’re looking at between £30 and £90 for Slumber Party Massacre III... No wonder that guy went mad with a drill! Incidentally, if you’re a fan of the tie-in sequel Sorority House Massacre II – and I’m most definitely not – you can grab that for £25-£33.

How about the truly dire Night Train to Terror in which God and Satan (the latter played by an actor called Lu Sifer) play chess for human souls? And not just any old souls, but the souls of spandex-clad dancers shaking their stuff onboard a late-night train. The fun can be yours for £34-£45, but I wouldn’t recommend it.

The yeti-themed Night of the Demon is just as tacky but far more entertaining. At £20-£80 for a DVD released by the notoriously shoddy Vipco, it’s still no bargain, however. Especially when you factor in the fact that the standout moment (in which a biker has his penis yanked off by the abominable snowman) has been unfortunately, er, snipped.

Giallo The Strange Vice of Mrs. Wardh is a strange case itself, considering I bought it online not so long ago for around £7. Now it’s asking £23 to £30, a little on the steep side for a film that’s a solid but unremarkable example of its kind. Another Italian thriller, Welcome to Spring Break – this time a little more on the slasher side but, in my opinion, considerably more fun – is going for £24.

If you want to watch Amityville 3-D in 3-D and with those all-important 3-D specs, you’ll pay £33-£60 for the privilege of feeling like those pesky flies are actually crawling all over you. (It’s even £40-£50 for the UK special edition of Amityville II: The Possession, and that one’s not even got any gimmicks to recommend it. Unless you consider rape and domestic abuse gimmicks – and let’s hope you don’t. Sicko.)

But the most expensive horror DVD I could spot was 1987’s Night Screams, with a price tag starting at £42 and going up to an almost unthinkable £187. Not bad for a fairly standard, though entertaining, slasher – not to mention one that’s barely known by most horror fans. And how did I get to see this rarer-than-rare delight? On Zone Horror, naturally. I think I still have it on tape, in fact...
Posted by Ross Horsley at 18:14