That’s right – not the “friendly” cargo. Nor the “lovely” cargo. Any aeroplane pilot worth their salt knows that tarantulas are the deadly cargo!

Fred (Howard Hesseman) and his buddy Buddy (Tom Atkins) probably know this but, unfortunately, they don’t know that some tarantulas are on board their aircraft when they take off from Ecuador, bound for the US. They think they’ve simply got a load of coffee beans, plus three illegal stowaways brought onboard to offset the export tax costs on the coffee. But the spiders are hiding in the beans, you see. Remember that next time you pop open a jar of Nescafé. Coffee beans = a fun playground for giant spiders. 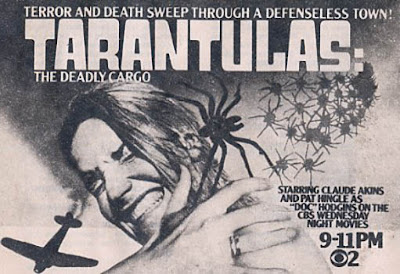 Yes, a flying spider chewing off your ear! (Isn’t that advert fantastic, by the way? God, I wish I lived in the seventies when things like that turned up in the TV magazines.) There are basically two kinds of tarantula in Tarantulas: 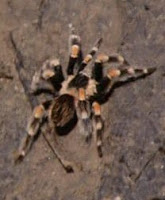 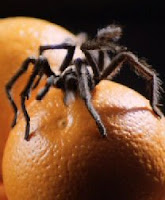 Ja, on ze left ve have ze “fuzzy oranges”, the slightly more aggressive and unfortunately predominant strain, prone to crawling onto people’s legs and generally employing all kinds of spidery scare tactics. Then there’s the “scrawny blacks” shown on the right, which don’t seem to bite as often but, sheesh, are they creepy-looking...

Soon enough, the killer spiders start popping up all over town – in drain pipes, fruit crates and, most tastefully of all, a school for autistic children. But the one place the tarantulas really make a bee-line (or a spider-line) for is the orange warehouse. Because spiders love fruit. Yes, coffee and fruit. ’Cuz they’re just nutty about breakfast (and if that’s not a slogan for cereal, I don’t know why not)... OK, to be exact, what they actually like are the flies attracted by fruit – or, in this case, the crickets attracted by fruit, since that’s what the prop managers come up with.

Now comes the biggest dilemma of all: not only are townsfolk dropping like, well, flies, but the orange harvest can’t be shipped. And if the oranges are left to spoil, then there’ll be no money and no jobs left for the people not killed by the tarantulas. So what are the good citizens of Finleyville to do? 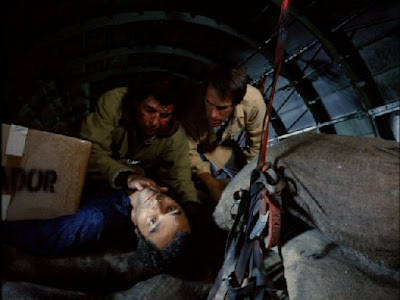 Well, this is a spoiler, really, so skip the rest if you don’t want to know what their solution is because, believe me, you’re not going to guess it yourself. The townsfolk decide to terrify the tarantulas using amplified killer-wasp noises, causing them to go into a catatonic (or spidertonic) state. The crisis meeting goes like this:

Man (cottoning on fast): If we can convince the spiders that there are wasps around...
Hero: That’s right! Then we can pick them up in an immobilized state.
Naysayer: Hold it... The spiders are in the oranges, and the oranges are in the boxes. You can’t get to ’em.
Hero: But they’re hungry... They’re hungry!

Yes, this really works! Next time you find a spider in your house, simply imitate the sound of a predatory wasp and you’ll see. It also leads to my absolutely favouritest bit of this already gob-smackingly entertaining film, in which the townsfolk experiment with different tones and pitches of wasp-hums in order to work out the exact frequency that stuns the spiders. One man holds a tarantula (in a jar) next to a crate of bees, leading to this priceless exchange:

Man (disappointed): That spider’s not immobile.
Girl: It looks scared, though!

Once the correct level of spider-paralysing terror has been achieved, the townsfolk scoop up the petrified tarantulas with spades and drop them into buckets of alcohol – which both poisons and drowns the creatures at the same time, while also making an attractive cocktail. For some reason, they do this really slowly, while loads of people just stand and watch the entertainment.

Unfortunately, the horror doesn’t end there. A sudden power cut brings a halt to the electro-wasp pop and the spiders start to wake up... Not only that, but the whole building has gone into lockdown... In total darkness! Yes, the orange warehouse has become a tarantula-infested scarehouse, with our heroic spider-scoopers trapped inside! 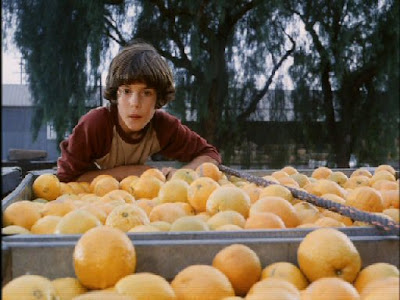 Phew! And you thought Aliens was scary... Although, I must admit, Tarantulas: The Deadly Cargo holds up quite well on the fear front, especially for a TV movie made in 1977. Director Stuart Hagmann (who hasn’t worked since, for some reason) extracts maximum suspense from every scenario – including a particularly nightmarish sequence where the three Ecuadorian stowaways are trapped in the hold of a storm-battered plane with hoards of spiders.

The ending strikes a strange note, however: I can’t decide whether it’s offbeat or just plain anticlimactic but, either way, it’s set to some really funky music so I’m not complaining. Tarantulas, you’re half creepy, half crawly, and all crazy fun!

Is this the one where the old coot cropduster goes into the shed and complains "Damn Spiders are havin' a field day in here." OR is that Kingdom of the Spiders with thespian Shatner? Thanks in advance Ross for any clarification!

Sounds like Samuel L. Jackson would've been perfect for this movie.

It's not from Tarantulas, Chick, so I think it must be Kingdom of the Spiders, although it's years since I last saw that one. My clearest memory of the Shatner classic is someone shooting their own hand off because a spider was crawling on it. Even at the age of seven that struck me as a pretty dumb thing to do!