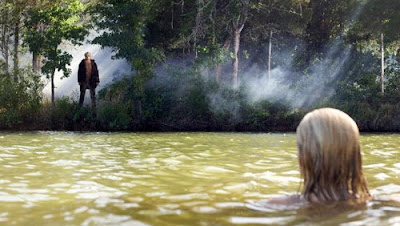 Watching the remake of Friday the 13th this evening, I experienced a startling revelation: I don’t really like watching slasher movies in the cinema. I mean, I do love watching slashers – always have, always will – but I get much more out of them at home on my TV.

I realize this flies totally against the whole “best enjoyed with an audience” aspect of shared-experience horror but – you know what? – the novelty of hearing someone shout “Kill the bitch!” at the screen, I can actually live without. Thinking back, the only really good time I’ve ever had with a slasher in the movie theatre was Scream, back when the number of mobile phones used onscreen actually outweighed those going off in the audience. But, anyway, I’m not here for a rant about movie audiences; my newly realized preference for fuzzy telebox viewing is my own problem. I’m here to look at Friday the 13th: The New New Beginning!

And let’s drag one fact out of the woods and into the campsite clearing right away: there’s no real doubt that the Friday the 13th redux is a better film than its predecessor. It’s extremely well made, looks great, and has something approaching a proper story (hell, it even has subplots). But is it more enjoyable? The short answer’s “no”. The original may look like old hat these days but, even watching it thirty years later, there’s that sense of risk, of gory abandon, of envelopes being pushed, that’s completely absent in this new version.

Part of that – obviously – is down to the fact that the once-shocking gore and violence are pretty mainstream stuff nowadays, thanks to the likes of CSI and the ever more extreme and nasty horror films produced by Hollywood. I actually think the gore is pretty well handled by the new Friday: it’s not literally thrown at you, as in the recent My Bloody Valentine remake, and there’s even a couple of effective fade-to-black moments where you might have been expecting a squirting prosthetic. Subtle! Ironically, however, the gore in the original 1980s F13th movies was somehow more titillating; that delight at seeing what they managed to get past the censors, being grateful for every surviving spot of blood splatter... That’s entertainment.

As far as leading performances go, I’d take Jared Padalecki over MBV’s Jensen Ackles any day. Jared’s certainly more likeable than his Supernatural co-star here, although that may be down to the fact that his character in Friday the 13th is the only male not presented as a total jerk. Seriously... you’ll probably never see a slasher so determined to make you dislike its characters. Is that a problem? Not hugely. Jason’s victims are there to be killed, and one of the new gang – the smarmy Trent, played by Travis Van Winkle – is so deliciously detestable that anticipating his demise is a pleasure. But, overall, I’ve not seen such an unsympathetic and unpleasant bunch since Freddy vs. Jason, which came from the same writers, Damian Shannon and Mark Swift. Humanitarians they are not.

Most crucially, Friday the 13th 2009 does feel like a Friday the 13th movie. Jason is a palpable, lethal menace and his methods are galvanizingly brutal. Would he handcuff someone and keep them alive in a mineshaft for six weeks as he does here? Not the Jason I know, but I’m still more than satisfied with this monster – who’s hulking, inhuman and so vivid you can practically smell him.

Also effective is the setting: just seeing the signs for Camp Crystal Lake is enough to give you a nostalgic goosebump or two in this context, although what the deal with all the mineshafts is, I’m not sure (there’s actually more underground mayhem in this than there was in last month’s My Bloody Valentine, and that was set in a mining town). Amusingly, the campsite itself has been abandoned since 1980, but characters are continually passing its weather-beaten signposts in a “this shouldn’t work but dammit it does” touch of wistful cheesiness.

Friday the 13th: The Remake, then, isn’t a disaster. Platinum Dunes haven’t turned out a reimagining on a par with their superb Texas Chainsaw Massacre – or even one that’s an outrageous exaggeration of a flattish original, à la Amityville – but they’ve got enough right to intrigue fans whilst keeping the mainstream appeal broad. An interesting slasher... that’s an interesting concept in itself. Can’t wait to watch it on the comfort of my TV.

I'm going to see this movie... eventually, but the feeling just hasn't hit me yet. I can't seem to get into it and that makes me question myself. My, how complicated my life has gotten!

I have not seen FRIDAY yet but I really enjoyed your review, Ross. It gives me some slasher hope!

I have seen it and I love what you have to say about it. My own personal opinion is a bit more positive, but your take on it is spot on. The only thing I might say is that seeing it in the theater with the right audience is better than seeing it at home... but the same isn't true of seeing it with a bad audience. I remember Halloween: H20 being ruined by the audience (I couldn't hear a word of dialogue between all the screaming and hooting)... but this past weekend, the audience added an incredible amount to my enjoyment of Friday the 13th. People actually stood and clapped when the title hit the screen, which made that moment incredibly memorable -- a moment I otherwise would have just let go by on DVD without a thought.