It’s been a couple of weeks since I watched Sweet Sixteen and I’ve been meaning to cast a critical eye over it for a while now, but... meh. It’s hardly calling out to be reviewificated. Not because it’s bad – it isn’t. But it isn’t the slasher movie that its DVD cover and reputation would suggest, and how it’s even ended up being classified as a slasher, I’m not sure.

Well, actually, I have a pretty good idea... It was released during the slasher’s golden age (1983 to be precise) and stars Dana Kimmell, fresh from her stint as Friday the 13th Part III’s final girl. And THANK THE SLASHER GODS for Dana Kimmell in this movie because, without her, it wouldn’t be half as much fun.

That’s a pretty controversial comment considering Kimmell has since gone on to badmouth the Friday the 13th series, violence in horror films, nudity in horror films and, well, just about everything that makes horror any fun. Nice one, Ms Kimmell – you’re welcome to your post-slasher career of one-off appearances in daytime soaps – but I’ll admit it: your funny and engaging presence is the best thing about Sweet Sixteen.

Kimmell plays Marci Burke, a small-town Nancy Drew-type who reads books like this: 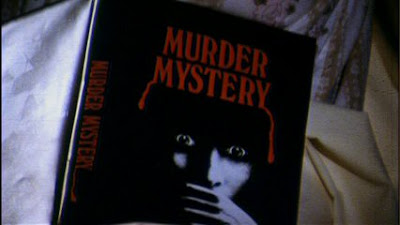 ...and is first on the scene when the body of a local boy is discovered with multiple stab wounds. Quickly pumping her sheriff father for information, Marci regales her classmates with the gory details, whilst all the while keeping one disparaging eye on new girl, Melissa Morgan (Aleisa Shirley), who was apparently the last person to see the dead boy alive. I mean, would you trust a girl who eats apples this seductively...? 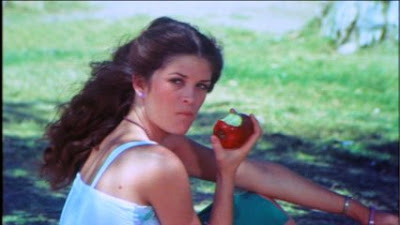 If all of this makes Marci sound like a bit of a bitch, I’m giving you the wrong impression... She’s actually a crazy hilarious bitch, and in many ways holds the film together. It’s not entirely her show, however, because she also has an almost equally funny older brother, Hank (Steve Antin), along for the ride.

By this point, you can probably see the entire plot of the movie spreading out in front of you in comfortingly familiar widescreen: bodies will pile up; the sleuthing siblings will investigate; Melissa’s behaviour will get stranger and stranger and— Nope! Sorry, not this movie. There’s one more murder and Marci and Hank scare each other silly talking about it, but everything basically dissipates into a sea of subplots involving archaeologist Patrick Macnee, tensions between the locals and their Native American neighbours, and a whole tin of red herrings.

Marci and Hank actually end up befriending the mysterious Melissa and attending her titular sweet sixteen party – although, when I say “befriend”, I’m using the term generously considering that the birthday present they give her is an old handkerchief. Look, you can see she just adores it! And look how pleased the siblings look with themselves! Told you they were just a leeeetle bit on the “crazy hilarious bitches” side: 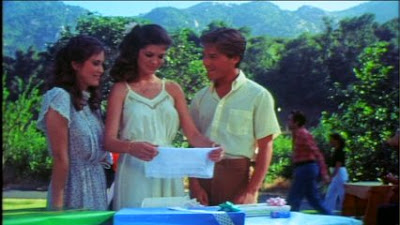 Things eventually come together in a quick round of last-minute stabbings and a not-very-surprising revelation concerning the identity of the killer but, if you’ve been led to believe this was going to be a slasher movie, you’ll be mondo disappointado. It’s much more along the lines of a made-for-TV mystery, which of course suited me just fine but isn’t likely to mollify anyone who’s shelled out for the special edition (!) DVD, especially considering the poor transfer.

Speaking of the DVD, you get a Theatrical Version and Director’s Cut, which purportedly aren’t hugely dissimilar. I took a look at what’s apparently the main difference between the two: the opening scene, which, in the Director’s Cut, involves a long, steamy shower sequence with the – eek! – supposedly 15-year-old Melissa, sans apple and clothes.

I actually preferred the Theatrical opening, mainly because it offers more of Dana Kimmell... There she sits reading that fabulous Murder Mystery book as a storm rages and a mysterious knock is heard at the door. Cue suspense music followed by a jolt I’m not going to spoil here, except to note that (1) it has absolutely nothing to do with the rest of the movie, (2) was obviously filmed months later, and (3) is just fucking wonderful.

Where's the Bo Hopkins love? I was seriously expecting a still of his fine ass when I saw you reviewed this.

I love this movie, and I agree, Dana makes this film. She's warm and she's funny and contrary to what you've heard, I know someone who knows her and he says she's a wonderful person. That's all I really care about.

I like the little love story with Bo and that lady at the - library? I can't remember now. Anyway, I think the characters in this movie are great - a lot of fun. And that first death is REALLY stylish.

And the end shot - YIKES.

Great review. I don't think I knew she was reading Murder Mystery. Where can I find that book? :)

I concur with the theatrical opening. It is fucking wonderful! And as forgettable as this film is, it's still kind of memorable because of the time period it was made in, strangely. I'd imagine having a sit down dinner with the cast and talking about old times. Of course in through the kitchen doors comes Melissa brandishing some choice sharp cutlery.

You're right, Amanda, I've sorely neglected the BoHop here... Hopefully, it'll all even out when I get round to watching Tentacles! And, Meep, can I have an invite to that dinner? Sounds rad!