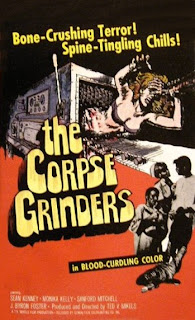 Ah, The Corpse Grinders. I’m pretty sure that, when people find out I’m a fan of horror films, they imagine I sit up late watching things with titles like that all the time. But the truth is, as nasty as it sounds, The Corpse Grinders is about as innocuous as 70s grindhouse features get. It’s almost charming, in fact... Or, at least, as charming as a film about unscrupulous factory-owners using human flesh as a cat food ingredient could be, anyway.

With such catsploitation dynamite as a premise, you’d think director Ted V. Mikels would be happy enough to stick a few perfunctory characters in the way and cut straight to the corpse-grinding (I’m sure Herschell Gordon Lewis would have) but he and his team actually take the idea a step further. You see, it turns out that cats, once they’ve tasted human giblets, won’t settle for anything less, so it’s not long before pets the length and breadth of Pasadena are biting the hand that feeds them... Literally! Logically, it’s a leap, I’ll admit. If cats are that insatiable, shouldn’t they already be going around attacking horses, or whatever else went into pet food in the 70s? But, no matter, the cats are OUT FOR BLOOD! And if that means fifty shots of alcoholic housewives clutching wriggling cats to their throats, then so be it.

On that note, something tells me that most of the feline stars of The Corpse Grinders weren’t properly trained stunt cats, but actually just regular cats lured by the promise of a quick paycheque and fifteen minutes of fame. But I hear that most of the moggies were supplied by cast and crew members so, assuming they wouldn’t have wanted any harm to come to their beloved pets, I’m telling myself that none were harmed during the making of this film. 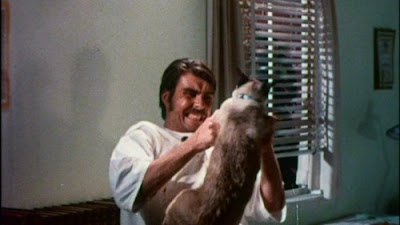 72 minutes whiz by, as more good pets go bad and several factory employees end up as corned beef – and, with dead bodies being chucked fully-clothed into the grinder left, right and centre, it’s no wonder the cats are going crazy. They’re probably choking on the buttons. Eventually, Hot Nurse puts herself in peril by going to investigate the cat food company. Alone. At night. And everything culminates in a climax wherein yet more people get minced, after being shot and – rather clumsily I thought – collapsing onto the conveyor belt and getting dragged into the blades (which in a nice touch, actually have blades painted on them as far as I could see).

“Lotus Cat Food – for cats who like people” runs the company’s amusing slogan, in a typical example of this enjoyable film’s light touch. Half of the scenes take place in swirls of mist and/or green-and-red lighting, while half the cast look like Jerri Blank from Strangers with Candy. I had fun, in other words. A remake along the lines of the recent Wizard of Gore or 2001 Maniacs couldn’t ever capture its straight-faced zaniness but, at the same time, there’s the potential for some camped-up, CGI gore-strewn lunacy here, and I think the makers of Trailer Park of Terror should have a go at it.

Best watched, then, with the cat safely locked outside, dinner fully digested, and your tongue shoved firmly into your cheek. Or someone else’s. If you’re still peckish.

This is a great review. Corpse Grinders isn't my favorite of Mr. Mikels films, but I do find it fun - mostly what I remember is the awful "sign language" scenes. They looked a bit like patty cake to me!

Haven't seen this one but you've piqued my interest and that poster is pretty awesome!

Excellent review. I think what Mr. Mikels does best is really create a bizarre universe all his own. My favorite of his pictures is probably THE DOLL SQUAD.

The cat pictured appear to be a Snow Shoe Siamese- my favorite breed. As a fan of this breed, cats in general, and cheesy horror: I have to check this one out.