Night of the Living Dead 3D

Raise your glasses, please... this review is COMIN’ AT YA! in 3D!

It’s true, folks – if you have a pair of 3D specs handy, you can thrill to my amazing screen shots from Night of the Living Dead 3D actually IN that mysterious third dimension! But I’ll bet that your glasses aren’t as cool as my super-de-downright-duper, blood-splatter-effect NOTLD glasses, four pairs of which came with my DVD. That’s right... FOUR pairs! How popular do they think I am?

Anyway, before you get too excited – and I know what you’re like when you’ve had too much orange juice – I should point out that the 3D in Night of the Living Dead 3D is... well... OK, to be blunt, it’s terrible. I don’t know if that’s because large chunks of the film take place in the dark, or because the 3D effect doesn’t transfer to TV very well, or the process itself just plain sucks but, whatever the case, watching this movie looks mostly like this: 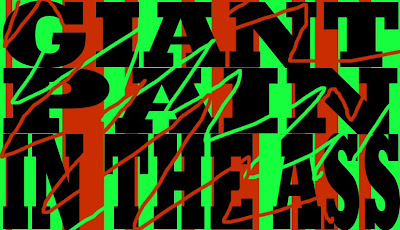 Oh, I forgot to mention that Sid Haig’s in it, so it actually looks like this: 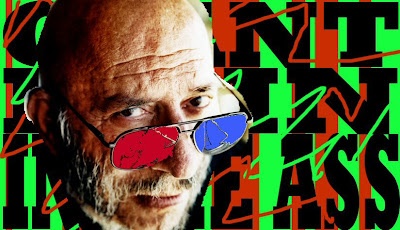 I was honestly tempted to remove my specs at various points and watch the film in fuzzy flatscreen. At least that way I might’ve actually been able to see what was going on. But I persevered – for your sake, dear reader, and just in case there was some really cool shot where zombie guts came flying out of the screen and totally landed in my lap in a big bloody heap. Unfortunately, that never happened; there’s hardly any gore on show at all here. But, then again, I was wearing my nice jeans, so it might’ve been for the best. 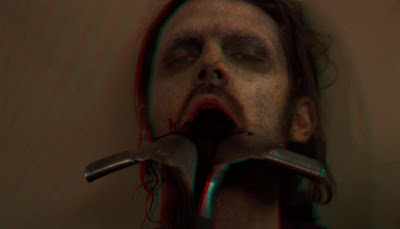 George Romero’s original Night of the Living Dead has been colourized, re-edited, parodied and even remade once already, so remaking it in 3D was probably the only thing that hadn’t been done to it before now (or before 2006 if you want to get picky about the release date). There’s definite potential for fun in 3D horror: Amityville 3D showed us what it would be like if a giant stuffed swordfish levitated into our faces; Jaws 3D went one step further by making it a giant stuffed shark; and the recent My Bloody Valentine probably took the format to its zenith as far as airborne gore goes. Does Night of the Living Dead 3D bring anything like that to the table? No. It most certainly does not. Although I’m sure I looked pretty snazzy in my 3D glasses... Did I mention the cool blood-splatter-effect frames?

What we do get is a reasonably cute beginning, going from an opening gag involving the original film showing on a TV set, to a reworking of the famous graveyard scene that manages not to grate. For a minute, I thought I was going to like it. But the unfortunate truth is that this remake rather quickly becomes boring. 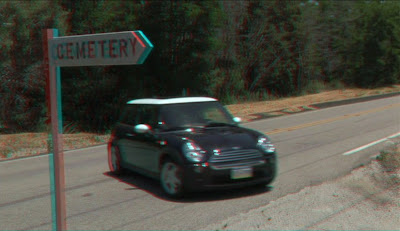 “Barb” (Brianna Brown) is zombie-chased to the usual big farmhouse after a perplexing run-in with local mortician Sid Haig, and a motorbike lift from a greasy stranger (Joshua DesRoches, recently seen in The Curious Case of Benjamin Button). There, they encounter a group of people watching the original Night of the Living Dead on TV (once was funny, twice is... not so funny). They warn them of the zombie menace, said people laugh in their faces, zombies eventually show up and... well, that’s it for a while. No one makes any attempt to prevent the living dead repeatedly crashing in through the windows; two teens sneak out to the barn to have sex but end up getting munched... Basically, everyone acts like it’s all an annoying interruption to their TV viewing.

Roughly 57% of the time, then, my eyes were unable to penetrate the three-dimensional gloom, while the rest of the time, I felt like I just didn’t get it. Is Night of the Living Dead 3D supposed to be funny? Characters come out with lines like “When the dead walk, you gotta call the cops” and “The zombies must’ve cut the phone lines!” but I didn’t find myself smiling. For the most part, the zombies themselves look like badly-dressed people in need of a good night’s sleep, and it’s a good job they don’t go around crying “Brains!” because they’d be unlikely to find many amongst the cast. 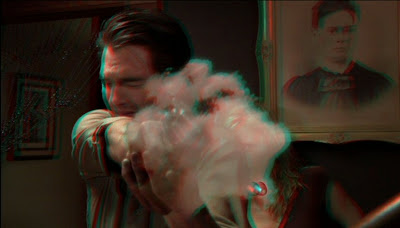 Thing is – annoyingly – I did find myself drawn back into the proceedings during the second half. This version of the tale provides an explanation for the undead hoards (which actually aren’t so much “hoards” here, but just a few zombies dotted about). While I don’t think the concept particularly needs explaining, the backstory this movie comes up with is sort of intriguing, especially when it emerges that one character regards the living dead as having been “born again”. I kind of dug it. I know. I hate myself.

Grudgingly, grudgingly then, Night of the Living Dead 3D gets a...

Just watched this a couple weeks ago. So, so bad. I was actually kinda disappointed that I didn't get to see it in 3D (ordered it as such from a dude on Amazon...he sent me the 2D) but after reading this, i'm sure that would've only made it a worse experience! My eyes never really worked well with 3D anyway.

I actually saw this horrible film in the theater. My boyfriend is a 3D nut, so there you go! We have regretted it ever since.

I remember thinking one guy was really funny. The balding blonde guy who owned the house (I think), and the part where Barbara got the text saying "I'm coming to get you..." but that was IT!

I love the stills, Ross. It looks much better that way, actually!

I swear those glasses say NIGHT OF THE LIVING DESU.

I've got Amityville 3D but haven't managed to watch the whole thing - the 3D in it is very poor. The new 3D with the polarised spectacles is great - and it doesn't hurt your eyes like the red/green does.

Stacia, how dare you insult my amazing cardboard glasses! Now I've lost all confidence when wearing them in public!