Well, really! Who wants to see knitting needles going into places where they definitely shouldn’t? Or chunks of human flesh used as masturbatory aids? And Christmas decorations made from mutilated corpses?! Not me! BAN THIS SICK FILTH, I say... I’ve had enough! 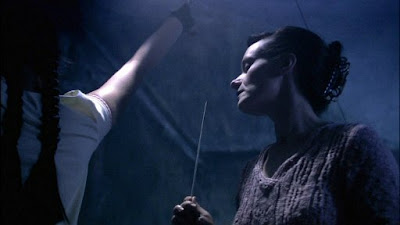 Hee! Gotcha. Although Mum & Dad quite obviously goes out of its way to disgust you with its depravities, it’s actually nice to see a torture-porn-type flick that’s clearly aimed at seasoned horror fans, as opposed to shock-me-once teenage moviegoers. It’s also pretty well acted, creepily convincing, and astonishingly good-looking considering its £100,000 budget.

Oh, and the BBC stumped up some of the money to make it, so it practically counts as Public Service Broadcasting... Just call yourself a responsible adult. 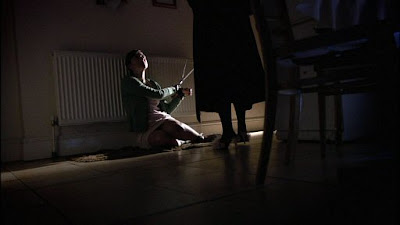 At the outset, Mum & Dad reminded me a bit of 2004’s London Underground chiller Creep, although it’s nothing like it, really. The reason I thought that was because it also has a foreign-girl-in-London lead – in this case, Lena (Olga Fedori), a young Polish woman working as a cleaner at Heathrow Airport. Where Creep pitted its heroine against a sort of over-the-top monster-human in a gothic setting, however, Mum & Dad takes Lena into what seems like a very ordinary suburban home. Of course, it’s anything but... The run-down house beside the airport, which Lena ends up in when she misses her last bus one night, actually has more in common with the home of Fred and Rosemary West.

In fact, it’s home to two “children”, Birdie and Elbie, who spend their days ransacking lost luggage for electrical items to sell at the car boot. Then there’s their “Dad” (Perry Benson), who wears a blood-soaked vest and does dubious things in a dark room with a dirty hammer, and finally “Mum” (Dido Miles) who prefers a scalpel. It’s the kind of place you’d run screaming from. And Lena would have probably done just that if she hadn’t already been injected with tranquilizer and tied to a filthy bed. It seems the family are looking for a new daughter... 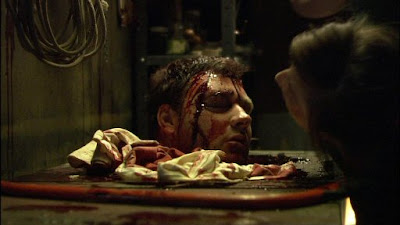 What really works is the disturbingly short journey Lena takes from dull routine to incomprehensible terror. Mum & Dad pulls the strange trick of not letting you see much of the exterior of its house of horror, but this only serves to strengthen the point that it could almost be next-door to yours. Now, are you sure you need that cup of sugar?

I just read about this movie in Gorezone. You Brits got it all baby... Dr. Who (that Tennant guy is so hot) and this. Jealous!

This sounds really, really good. You got me with:

"What really works is the disturbingly short journey Lena takes from dull routine to incomprehensible terror."

Isn't a portion of all good horror? I could never put my finger on it before (at least not quite to eloquently), but the idea of what is normal being ripped from beneath you like a cruel rug yanking trick, just unsettles me...

Nice to see you back!

cannot wait to see this now.

I think you'll both like it! It's certainly brutal, and the setting's different enough to give it some novelty, especially if you're not from the UK. Here, of course, we get this sort of thing on EastEnders practically every night...

A well done piece of shit