Feast your slasher-hungry eyes on the UK poster for the upcoming horror movie All the Boys Love Mandy Lane (with handy footnotes): 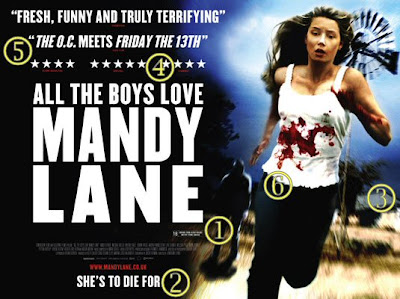 1. The BBFC granted the film its 18 certificate (for “strong bloody violence and very strong language”) as long ago as last May, but the film’s release was delayed due to the director refusing to bow to pressure from producers to trim gore scenes. It’ll finally be released uncut in the UK on 15 February.

2. The tagline “She’s to die for” was previously used for Return of the Living Dead III in 1993.

3. The house used in the film was formerly owned by the family of Hilary Duff.

5. Female lead Amber Heard (Mandy) has actually appeared in The O.C., playing a sales clerk in the season 2 episode “The Mallpisode”.

6. Mandy Lane is the latest in a long line of horror heroines to sport the “bloodstained white vest-top look”, as modelled by Jessica Biel in The Texas Chainsaw Massacre and Eliza Dushku in Wrong Turn.
Posted by Ross Horsley at 23:45

Just sending a message. I probably won't be on my blog anymore (see latest post) because I'm moving to a site. Up and coming. I'll keep checking your anchorwoman blog, and I hope you have many happy writings for the future! Good luck,

Just FYI – It's a real stinker of a film. The plot is soooooo obvious right from the start; especially when all the guys are falling over themselves to get off with ML, who is nothing special at all!
Avoid