The joy of ex (rentals)

I’m rich... RICH, I tell you! If, that is, true wealth is measured in battered VHS tapes of old TV movies. Which, of course, it surely is. Yep, I snagged a few 50p bargains at Doncaster market the other day, which I’ll hopefully get round to reviewing in the next few days weeks years. So let the cover-scan frenzy begin! 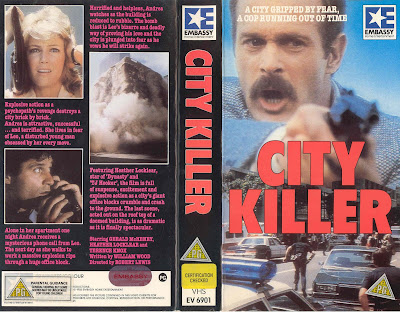 Something tells me I’m in for lots of stock footage of collapsing buildings in the 1985 TV movie City Killer... “Featuring Heather Locklear, star of ‘Dynasty’ and ‘TJ Hooker’, the film is full of suspense, excitement and explosive action as a city’s giant office blocks crumble and crush to the ground”. But couldn’t they have found a better picture of Locklear for the back cover? All I can say is I hope they’re her own hands...

...otherwise there's definitely a bit of Hills Have Eyes remake nastiness going on there. 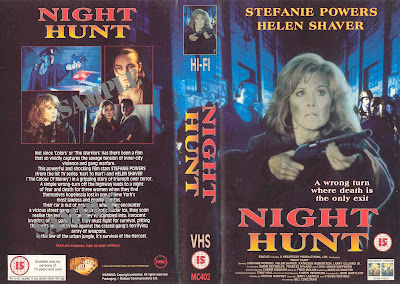 Now that’s a smokin’ cover pic for Night Hunt! (Not to be confused with Helen Hunt.) And no wonder, considering that “Not since ‘Colors’ or ‘The Warriors’ has there been a film that so vividly captures the savage tension of inner-city violence and gang warfare”. Hmm, I’m not sure you can capture that in an early-nineties TV movie, but I’ll give them the benefit of the doubt. Unless someone with a flick-knife says “freaking”. 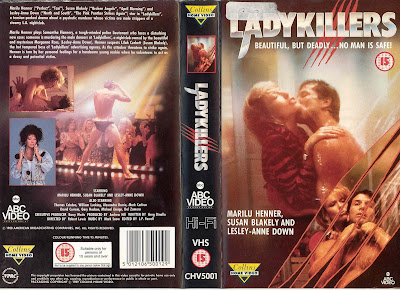 Ladykillers looks pretty steamy, though... Quite literally, if those two shower scenes on the front cover are anything to go by. And it stars the “tough-minded” Marilu Henner, “hot-tempered” Susan Blakeley, and “beautiful and mysterious” Lesley-Anne Down. Sounds simply scorching! 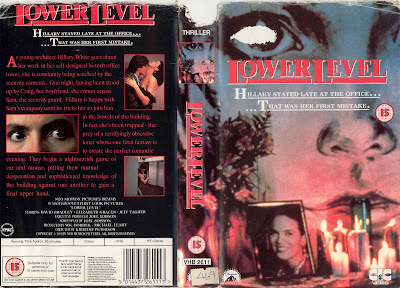 “Hillary stayed late at the office... That was her first mistake”. I’ll bet her others in Lower Level (thrilling title) include tripping and falling over whilst running away from the killer, and/or falling in love with the killer. Which, quite frankly, serves her right for having her own “self-designed high-tech office tower”. Stuck-up cow. 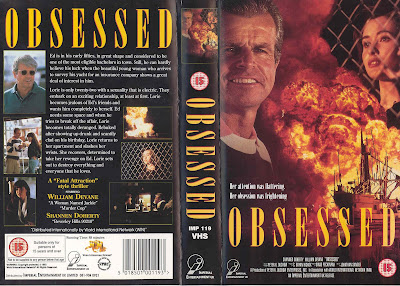 Speaking of which... Shannon Doherty stars in Obsessed as the, um, obsessed ex-girlfriend of William Devane (“in his early fifties, in great shape”, as the video box apologises). Wonder if it’s modelled on that successful late-eighties thriller about an insane, bunny-boiling former mistress. Fatal something or other...? 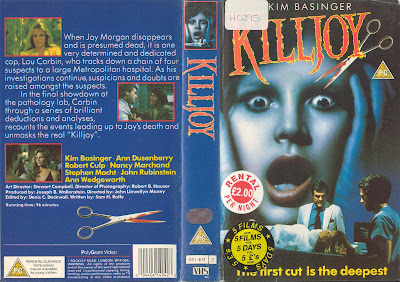 Anyway, Killjoy sounds more like it, what with a young Kim Basinger and enough bloody scissors to convince you it’s a slasher movie, rather than a made-for-TV whodunit from 1981. Well, it was the height of the slasher craze, after all... 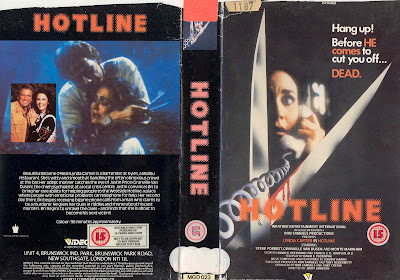 But here’s the real deal! Hotline, starring Lynda Carter (and yet more bloody scissors). “Hang up! Before HE comes to cut you off... DEAD”... It’s just so Halloween-meets-When a Stranger Calls. I'm hoping. I actually saw this one back in the day (the day being circa 1988 on late-night ITV, as opposed to 1982 when it first aired in the US) and something tells me I’m gonna love it all over again. Hope that enormous photo on the back isn’t a major spoiler or anything, though...
Posted by Ross Horsley at 11:34

I have most of these movies, but I HAVE to get City Killer. Oh Heather, how I love thee! The Shannen movie Obsessed is pretty good. She's kind of my hero, btw. I love the old vhs boxes. This is a great article!

I finally got City Killer in the mail. It's one of those cheapo EP vhs tapes and I think it's only got about one good play left so I better plan it right!