Did someone say “theme week”?! Hot on the heels of Hysteria, here’s another psycho-thriller that also has a one-word title beginning with H... It’s the classic 1982 TV movie, Hotline.

Yes, I said “classic”. It may not be a landmark in cinema – or even TV movies – but there’s something about Hotline that just works. Y’know? Like when the batteries in your remote control run out, so you take them out, put them back in again, roll them around a few times and – hey presto – the remote works again. I can’t explain why it works. Scientists can’t explain why it works. But the point is: it does. And so does Hotline. 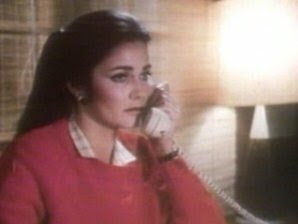 Part of the movie’s success is undoubtedly down to Lynda Carter, who stars as art student and part-time bartender, Brianne O’Neal. Carter brings a degree of world-weariness to the role that I’m not sure is intentional – after all, once you’ve been Miss World and Wonder Woman, where is there to go but down? – but which acts as a total grabber. You just can’t help but feel for the lonely gal with the vintage car and mysterious house-sitting arrangement (I would elaborate, but the reasons why Brianne’s staying in a luxury beach house are never explained).

One night at the bar, Brianne fends off the attentions of a drunken customer who’s looking for a little return on the generous tips he’s been giving. She lets him down gently at first, becomes a bit sassier when he turns threatening, and eventually kisses him off with a cheerful “Drive safely!”. I’m not sure whether this is a blast of sarcasm or an example of early-80s attitudes towards alcohol but, either way, her people-skills impress nearby psychiatrist Justin Price (Granville Van Dusen) so much that he offers her a job working for his crisis helpline. 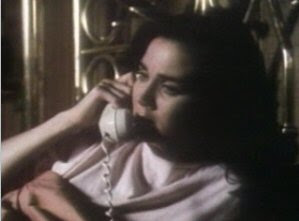 Brianne is a bit reluctant at first but, luckily, her first phone call comes from a teenage runaway who’s just a peach to deal with. We only hear one half of the conversation but, basically, Brianne tells her to call her parents, the girl presumably cries, “Sure! What wonderful advice!”, and Brianne is well on her way to becoming the hotline’s employee of the month.

So now Brianne has art classes all day, two part-time jobs, a new boyfriend (it turns out Dr Price didn’t just pick her for her phone manner) and still finds time to get herself a mentally disturbed stalker. That’s right... one of her regular callers at the hotline is a rasping lunatic who loves nothing more than to taunt her with creepy children’s rhymes whispered in a, well, whispery voice.

Of course, Brianne is quick to realise that each rhyme contains a clue to a past murder committed by the psychopath. Like, when he whistles “London Bridge Is Falling Down”, he means that the murder took place in... Michigan! (Just kidding – it was actually London.) Soon, Brianne is spending whole days at the local library scanning microfiche for reports of mysterious deaths, not to mention jetting down Reno to investigate past crimes. Heck, it’s not like she’s busy with two jobs and a college course or anything...

Anyway, most of Hotline plays out along these lines, and entertains in ways that only TV movies from the 80s can (although it actually has quite a 70s feel). Carter charms as the busy but bored woman who actually finds dealing with a serial killer quite exciting; Van Dusen is just gross as the psychiatrist/love interest; and you’ll probably spot the identity of the killer a mile off (but it’s very satisfying nonetheless). Everything eventually comes together for a slasher-movie styled climax that finds the killer on the loose with a big pair of scissors and Carter running around in a blouse sporting more tassels than a 70s lampshade.

Click HERE for a look at the UK video cover, but bear in mind that the photo on the back is a major spoiler! The same goes for certain shots included in the trailer – if you can make them out through the murky picture quality.

Tune in next week when I’ll be reviewing “slasher movies with seven-word titles beginning with I”. Oh, and if anyone can think of any, feel free to drop me a line. Thanks.

I have not seen this movie in FOREVER. You so make me want to see it again. What I remember - her living situation, that she was a bartender, and the awesome "twist"! Good stuff.

You know, how did she manage her time? She should teach a class!

Nice little shot of nostalgia. Thanks!