Flashback alert! We’re going deep, people, and I don’t mean the eighties. I don’t even mean the seventies... no, I mean the sixties! Turns out they actually had movies back then, although no CGI to make them look all realistic and everything. Anyway, today’s mind-bending review comes way back from the hazy, crazy days of 1965... Far out!

Come with me now as we drift back through the mists of time... *Cough!* (’Scuse the dry ice there.) Just imagine for a moment you’re not sitting in front of your plasma screen surfing the net, but instead reclining on a stylish, probably vulva-shaped sofa, lazily perusing the pages of your favourite Cahier du cinéma (that’s French for “snooty movie mag”). So pop off your iPod nano and nix that Nintendo DS – it won’t do you any good anyway because where we’re going it’s all black-and-white – and prepare to be sent into... Hysteria! 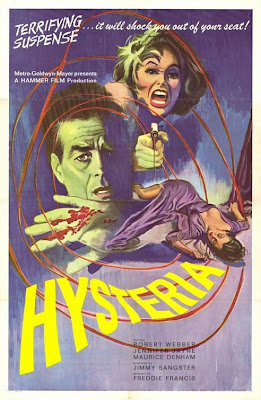 “Without a past, I have no future... How long can a man live in a void without going nuts?”

That’s the dilemma facing Chris Smith (Robert Webber), an American in London who’s lost his memory after a car crash on the deadly roads of rural Kent. Upon his release from hospital, Chris learns that someone has made a luxury penthouse available to him in the city. But just who is his mysterious benefactor? Why is the rest of the apartment building empty? And will you please save any further questions for the short Q&A session at the end?

The only clue to Chris’s identity is a photograph found at the scene of his accident, showing a beautiful but unknown woman. Asking around at a local photography studio, he learns that she was a model who was murdered six months ago. Not only that, but the crime took place in his own apartment block. Could her death be linked to the mysterious, arguing voices he hears emanating nightly from the empty apartment next door? Or has the accident left him with mental problems worse than mere amnesia? And, hang on... doesn’t the beautiful female driver who just passed him in the street look suspiciously like the supposedly dead girl?

Ah, questions, questions, and yet more questions. But don’t worry, this is 1965: David Lynch hasn’t been invented yet, and films still have to have proper endings that tie everything up sensibly. Of course, that doesn’t mean they have to be dull... although, to be perfectly honest, Hysteria does get just the tiniest bit dull once it’s established its mystery premise. Luckily, a flashback sequence at the 45-minute mark turns everything on its head and, from then on in, it’s a pretty gripping and suspenseful ride all the way to a triple-twist ending.

After the success of Psycho and Les Diaboliques, Britain’s Hammer Film Productions got in on the game with a string of psychological horror-thrillers of this sort. Most were written by Jimmy Sangster, who produced roughly one a year throughout the sixties, raiding the thesaurus to come up with such titles as Maniac (1963), Paranoiac (1963) and Nightmare (1964). It’s also arguable that these had a strong influence on the Italian giallo movement, and indeed most of Hysteria’s plot elements would resurface in many a classic giallo in the seventies. But, while Hysteria is a prime example of Hammer-produced psycho-thrills, it lacks the visual imagination and excesses that make its Italian cousins so memorable.

Still, it’s got groovy, spiralling opening credits, a touch of raciness, and a conclusion so neat I doubt any mystery fan could come away too disappointed. Any other questions?