Horror That Made Me #6

Well, I did say we’d be going back to the eighties for the next “Horror That Made Me” entry, counting down the ten films that most influenced my understanding of the genre – and you don’t get much more eighties than 1985. The middle of the decade produced a glut of teen-vampire movies, including The Lost Boys, Vamp, Near Dark and, er, Teen Vamp, but by far the standout film for me was... 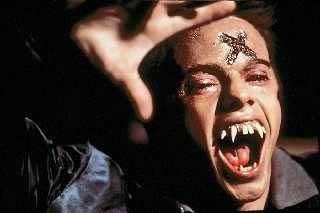 Fright Night is a film that just gets everything right, from the comic – but not silly – tone to the frequent frights, via the genuine sense of camaraderie amongst the heroes and the still-wowing monster effects. It’s also one of the gayest mainstream horror movies ever made, with the only major competition coming from the same year’s A Nightmare on Elm Street Part 2 (which is quite possibly THE gayest if you go along with Camp Blood’s brilliant review). 1985: a flagship year for queer fear? Read on!

Fright Night’s gay subtext is there if you want it (and as a gay teen starved of references I could actually relate to, I was desperate for it) but doesn’t distract from the film if you aren’t in the market for it. In addition to the various strange relationships in the story, there’s the cast itself, featuring gay actors Roddy McDowall (yay!) and Amanda Bearse – as well as Stephen Geoffreys (who later made it big in gay porn under the alias “Sam Ritter”) and William Ragsdale, who’s straight but went on to play Ellen DeGeneres’s boyfriend in her nineties sitcom (how queer is that?).

As a teenager, I knew there was something different going on under the surface of Fright Night – something furtive and funny I didn’t fully understand but which I felt a certain affinity with. That’s why the film became one I returned to again and again during my teenage years, one that fascinated me with its subversive, enticing aura – and which retains a powerful punch of nostalgia today.