Horror That Made Me #9

The second film in AiP’s countown of the ten “Horror That Made Me” movies isn’t actually a horror movie, although there are plenty of corpses, thunderstorms, cloaked killers, the odd monster, and a healthy dollop of buzzard pus. It’s an Old Dark House spoof starring Tim Conway and Don Knotts as two Scotland Yard detectives investigating a double murder at a country estate, and it’s called... 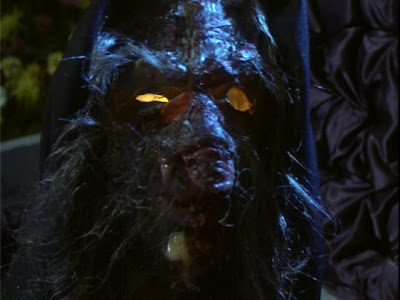 Even when I was aged five there was nothing in The Private Eyes that scared me - although I can’t say the same for my younger sister, who was a mere three years old at the time. And that’s where the film taught me an important horror-related lesson: what doesn’t scare YOU may well terrify someone else, and vice versa. And indeed Vice Versa, starring Judge Reinhold and Fred Savage, may well terrify you. And if so, well, it’s OK... Fred Savage’s curly bonce just has that effect on some people.

Anyway, my sister loved The Private Eyes as much as I did (or, at least, that’s what I told her as I put it on for the 27th viewing). But there was one scene – one moment so horrifically terrifying to her – that she wouldn’t even stay in the same room while it was playing on the TV. Shocking photographic evidence of said moment of pure fear may be seen above, wherein a ghoul/zombie/puppet (it’s never actually explained) pops out of a coffin in a spooky mausoleum, terrifying the bumbling detectives and, in the process, my little sis. Yes, fear is in the eye of the beholder – and horror films provide us with a “safe” insight into just how much horror we can handle, as well as how much other people can handle, and if we’re really lucky, what really scares us...

Lesson learned: Horror is power.
Posted by Ross Horsley at 16:45