Horror That Made Me #8

Most of the entries from my countdown of the ten “Horror Films That Made Me” are movies I experienced at an early age, but not this one. I was at least 24 when I saw for the first time Dario Argento’s... 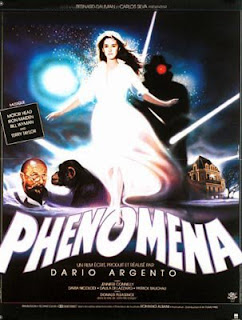 I’d seen Argento movies before this: Trauma, unwittingly, in the early nineties, when I’d rent any horror film that came to my local video store; Suspiria a little later, when I discovered it in a big branch of HMV and read Leonard Maltin’s enthusiastic review. Opera and The Stendhal Syndrome were early DVDs I picked up when the availability of American releases in the UK meant that uncut versions of films became possible to get hold of for the first time. Still, the buzz around the director’s work eluded me. I found them confusing, artificial and ultimately unsatisfying.

Phenomena was different. I can even pin down the moment when I suddenly “got” Argento. It occurred as Phenomena’s heroine arrives at her destination thirteen minutes into the film and, from nowhere, a gravelly male voiceover gravely intones: “And so Jennifer arrives in Switzerland from the New World to pass her first memorable night at the Richard Wagner International School for Girls...”

The voiceover is never explained, never continued, and it’s the only time it’s heard in the film. Its sheer randomness, however, was the finger that flicked the switch inside my head, and I suddenly knew that I loved Argento and would be returning to all the films of his I’d previously seen to evaluate them in a new light. What I didn’t know at the time was that I’d become an obsessive collector of the man’s work, or that he’d become my favourite director of all time. But I am and he is, and for those reasons Phenomena secures a place on the list of Horror That Made Me... Plus the fact that it’s a fantastic film in its own right – the very definition of a horror fairytale.

Lesson learned: You never know when horror will grab you.
Posted by Ross Horsley at 08:55

Labels: Dario Argento, Horror That Made Me

Oh, and by the by, do you know hat's happening over at Bleeding Skull. The last update was, like, a month ago. :( Arrgha,

anxiously looking forward to the rest of this list...

Bleeding Skull's lack of updates is sending me cold turkey, too. Hopefully they've just gone back into hibernation for a short time, like before Christmas. At least Retro Slashers is back up -- and better than ever... Yay! Enjoying oh-the-horror in the meantime as well.

If the movie looks half as amazing as the poster, this just might be my favorite movie of all time. Look at the monkey and the professor, amazing. Thank you for showing me this.

no voiceover in the version i`ve seen in europe.

Interesting... I know there are several versions but didn't know any omitted the voiceover. I think it kind of makes the movie!