P2 falls into a horror subgenre very dear to AiP’s heart: the “trapped in a high-rise with a killer” category arguably spawned by the excellent 70s TV shocker I’m the Girl He Wants to Kill. More recent examples have been the made-for-TV Trapped and The Face of Fear (the latter based on a Dean Koontz novel) and yet another TV movie, Lower Level, which I own on video but have yet to watch – and which sounds remarkably like P2. Why has this genre been explored so exclusively by TV movies? Perhaps because “trapped in a high-rise with a killer” movies can be filmed overnight in the TV offices without anyone having to build any sets... But I digress. 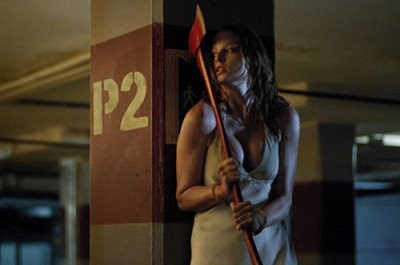 Angela’s working late on Christmas Eve, doing what all office people are always doing in movies – trying to land an account. I’m sure P2’s script explained what kind of account this was and what kind of company she works for, but I’m afraid I didn’t understand all the corporate techno-speak (hey, what can I say? I work in a library) and missed the details. But, no matter, the whole thing’s keeping her terribly busy and it doesn’t look like she’ll be arriving at her sister’s house in Jersey in time for the family meal tonight.

Eventually, after finishing her proposal and making Christmassy small-talk with some random people who may or may not turn up dead later on, Angela makes it to her car, parked in the building’s underground car park on level P2. And that’s when things go from “running late” to “running scared”, because not only will the car not start, but she finds she’s actually locked inside the parking garage – and the only other person around is a slightly creepy security guard, Thomas (Wes Bentley).

At first, Thomas seems friendly enough, even trying to get her car started by charging the battery – but something doesn’t seem right. He knows more about Angela than he should, his jokes about her staying for a candlelit meal in the cramped security office feel a little forced, and there’s a strange whiff of chloroform in the air. And when Angela wakes up a little while later chained to a table, she starts to realise she’s in big trouble indeed...

One thing separates P2 from the twenty-two tele-movies before it, and that’s sheer gruesome gratuitousness. It comes as no surprise that the film’s from the makers of Haute Tension and The Hills Have Eyes, as stomachs tear open, eyes are gouged, and guard dogs chew human flesh with gory abandon. Not that there’s anything wrong with that. Its nastiness gives P2 its edge as far as I’m concerned, and I’m not sure I would’ve enjoyed it as much had it relied simply on the mind-games between Tom and Angela that make up rather too much of the first half as things are. 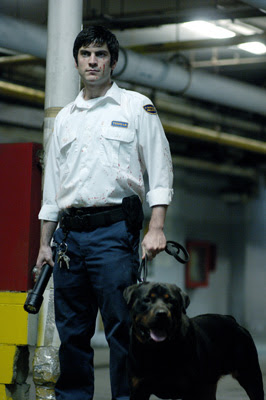 Angela isn’t bad as women-in-peril go, managing to do what you’d do for the most part if you found yourself at close quarters with a psychopath (while leaving out some of the disreputable things I’d do if said psychopath were Wes Bentley). Of course, her efforts are hampered by all manner of movie clichés, each one dredged up with relish but given a slight counter-spin either to offset the cheesiness or just cheese you off if you’re looking for plot holes, i.e...

Angela’s car won’t start! (But we suspect it’s been tampered with...)
Her phone has no signal! (But at least the battery doesn’t run out...)
She’s wearing a skimpy dress! (But the psycho dressed her like that...)

Yes, P2 is quite contrived, but then the villain has contrived to trap Angela, so it’s only a spoilsport who’d complain about the film’s believability.

Senator Roger Ebert gave P2 a solid three out of four stars, but then he always was an old gorehound at heart, despite how he’s complained about “dead teenager movies” in the past. I’m not sure he’d have found such novelty in the film if he’d seen as many “trapped in a high-rise with a killer” TV movies as AiP, but he does share a story in his review about how he once got locked in Hyde Park overnight... Hollywood, stop your endless remakes, I want to see a movie of THAT!

Quite an extensive review of this movie you have provided. Ok... that sounded weird. Anyway, P2 seemed like junk from when I saw the trailer. The weirdest thing was that the theatre I used to work at had a parking level P2...

i quite liked P2... but it's no haute tension for sure. i am forced to subtract one star from its score for hurting a dog... that just ain't right.