Horror That Made Me #7

Time to turn our backs on the eighties for the time being in my countdown of the ten biggest influences on the way I think of horror. Entry #7 is a film I first saw at the age of twelve but which had been made almost fifty years previously: Robert Siodmak’s more-Hitchcockian-than-Hitchcock thriller... 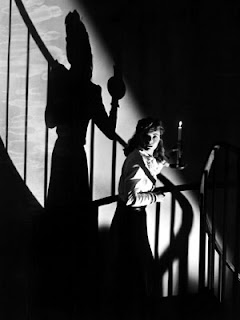 The reason The Spiral Staircase makes the list is because it taught me that “old” movies could still be extremely creepy... Not just creepy, in fact, but downright scary. And not just scary, either, but also absolutely beautiful. Ironically, for a film that deals with the punishment of physical imperfection, Staircase is a glimmming, shimmering model of monochrome perfection – its setting a mansion and its grounds all elegantly evoked on a too-real-to-be-real studio set.

Within the mansion we meet mute servant girl Helen, played by an instantly likeable Dorothy McGuire and stalked throughout by a sinister assailant in the style of the best modern gialli and slasher movies. The horror ranges from skin-crawling subtlety (check out the victim’s twisting hands in one otherwise unseen murder) to scream-out-loud suspense – so it’s no surprise this one’s been remade twice already, although neither version gets anywhere near the original.

Ultimately, The Spiral Staircase is a film with the ability to satisfy serious movie buffs and Saturday afternoon tea-drinkers equally; certainly, my idea of a good thriller wouldn’t be the same without it. For an interesting alternative take, however, read Final Girl’s review. But come back soon for Horror That Made Me #6, when strangely enough it’s back to the eighties again!