Hola mi chicos! Yes, Anchorwoman In Peril! is on vacation again, and this time it’s not even an enforced “vacation” – like when I moved home and lost my internet connection, or that other time when I was forced to leave the country until those pesky charges were dropped. This time it really is a holiday. I really am sitting here in sunny Spain in a not-so-sunny internet café, marvelling at the hellish temperatures and the fact that they actually have the internet in Spain. Yes, really... it’s in colour and everything!

Anyway, between all the sangria and bullfighting (oh, the scrapes I get into when I’ve had a couple of pitchers-full!) I have of course had time to watch a few movies – because, as we all know, cheesy horror never has a holiday. And what DVD was so exciting that I just had to take a break from the beach to view it? Was it perhaps the copy of hot new Spanish shocker [Rec] I picked up in Barcelona?

Or the DVD of Tentacles – with irremovable Spanish subtitles, natch – that I just couldn’t leave sitting on the shelf in Salou? 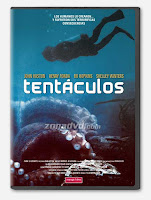 No! It was one of the latest “mockbusters” from rip-off specialists The Asylum, called simply Monster and clearly somewhat reminiscent of a certain cinema release entitled Cloverfield.

How did this unlikely mishmash end up in my portable DVD player, you ask? Well, firstly, it qualifies as a genuine Anchorwoman In Peril movie... or, to be exact, an Anchorwomen In Peril movie, because plotwise it’s all about two spunky American filmmakers shooting a documentary about global warming in Tokyo who find themselves at the epicentre of a fully-fledged monster attack – just like in Destroy All Monsters! Yes, it’s been ages since I’ve reviewed a proper AIP movie and I need to get back to my roots.

Secondly, I thought it best to watch this one while my critical faculties were down... and, with this heat, boy, are they down! It was kinda lucky, too, because I’m not sure I would’ve made it right the way through Monster without hitting fast-forward had it not been for the fact that I’d collapsed from heat exhaustion on one side of the hotel room and the portable DVD player’s little portable remote was on the other.

So, anyway, the best way of describing Monster is by comparing it to its obvious inspiration:

● Cloverfield is a mock-home video purporting to show the experiences of a small band of friends trapped amongst the rubble when a giant monster attacks New York. The film utilizes clever special effects and neat pacing to tell a riveting story.

● Monster is an actual home video showing the experiences of two young actresses handed a camcorder and told to run about in the car park of a Chinese restaurant. The film utilizes limited special effects and much padding to create a long section in the middle where nothing happens.

...Oh, forgive me; I’m actually being a bit harsh here. I blame the unforgiving climate. I’ve actually seen three Asylum movies recently (the others being Invasion: The Beginning and I Am Omega) and this one definitely had the best acting and production values... although actually being intentionally shot on cheap video must’ve worked in its favour because, during the first half at least, I found myself somewhat sucked into the drama of witnessing the fall of Tokyo from the perspective of two amateur filmmakers (and by this I mean the film’s camera-wielding main characters, not directors Eric Forsberg and Erik Estenberg). After all, who hasn’t seen Tokyo brought down by a rubber Godzilla at some point in their movie-watching life? But it’s a fun novelty seeing it presented as amateur handycam footage. Well, unless you’ve seen Cloverfield already.

If a new take on the Godzilla genre is what you’re after, may I point you in the general direction of South Korea’s The Host, a startling, witty and far more innovative film. But if you should find yourself in Spain with only a DVD of Monster accidentally left in your player, you’re not in for a total washout. As I mentioned previously, lead actresses Sarah Lynch and Erin Sullivan really aren’t bad in their “switch off the camera!”-screaming roles, and I also liked the movie’s one original idea: namely the suggestion that the monster is some form of mythical retribution against American interference. (In fact, I had hoped the screenwriters might’ve run with this element and given us some marauding Japanese citizens out for the blood of our American tourists, but the angle unfortunately goes mostly unexplored.)

Anyway, time for me to go and locate that stray remote and, seeing as I’m supposed to be on holiday, go and do something unequivocally and authentically Spanish – like learn to flamenco dance. Or watch [Rec].

Hopefully you'll cover Tentacles soon... and what were you thinking, not watching [REC] first? Go watch it. Now. I'll wait here 'til you're done.

Oops! Sorry, Corey, I know it's slack of me... Consider [REC] at the top of my pile, with Tentacles squiggling just underneath.