Horror That Made Me #1

Well, it’s finally here: the final and most significant entry in my countdown of the films that’ve had the most influence on me as a lifelong fan of the horror genre. It’s the big cheese, the main event, the... er, high chaparral. It’s the movie that not only shaped the way I think about horror but how I think about film. It’s...

Show me someone who’s afraid to go in the water and I’ll show you someone who’s scared of Jaws. Whether or not they’ve even seen the film. That’s how powerful it is. Jaws represents every unknown terror swimming in the depths of the human psyche. It’s there whenever you experience that sudden slip from fun to fear; it’s the unexpected touch of something you can’t see; that horrible feeling that you could be next; the unstoppable force of destruction waiting to pull you under forever.

It’s also the best bloody blockbuster ever to come out of Hollywood. Seriously, can you imagine something of Jaws’s quality on any level – be it acting, direction, editing or whatever – being the summer’s main event movie ever again? I think not! Will we ever see an American monster movie built around such compelling characters? Or allowed to build so carefully and deliberately? One that’s so adult? So primal? So terrifying?

My obsession with Spielberg’s seafaring masterpiece goes back almost further than I can remember – to nights spent huddled on the sofa watching the surfacing of a mechanical shark with the kind of awe most four-year-olds reserved for Disney cartoons. I’ve seen the film on TV, video, DVD, at the cinema, and will carry on watching it until I’m in my seventies and viewing it in cyber-surround holographic 3D (fuckin’ A!). Then, when it’s over, I’ll watch the sequels because I love them too... even Jaws: The Revenge. (In fact, I like that sequel best, so screw you!)

Some other childhood memories of Jaws:

– Being too scared to go to sleep in case my bed turned into a boat, floated away and was sunk by Jaws, subsequently leading to my watery, much chewed-upon death.

– Pestering my mum to find a copy of the video (yes, we lived in a video shop when I was aged between 4 and 6 – how lucky was I?). When it turned out we didn’t stock it, I was given Orca: Killer Whale to keep me quiet, and another love affair was born.

– My friends and I always trying to spot “the worm” when the shark explodes at the end of Jaws III: 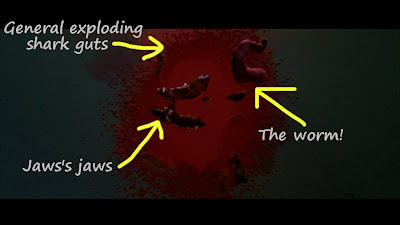 – Buying a blank video tape especially for the purposes of recording Jaws 2 when it came on TV as Saturday night’s big movie. Except the tape was faulty and I couldn’t watch it again the next day. Gutted.

– Reading Peter Benchley’s novel for the first time and being shocked – shocked! – by the phrase “vagina yawning open” (and no, I can’t remember the context).


Anyway, that’s the end of “Horror That Made Me”, although I look forward to plenty more memorable and influential horror movies coming along in future to shape my ever-evolving understanding of the genre. Or is that too much to hope?

Labels: Horror That Made Me, Sharks

i am intrigued by this "trying to spot the worm" exercise.

and it seems we share the same two 'most traumatizing movie' experiences. halloween and jaws.

How funny is it that I used to think my bed would turn into a boat too? Actually, I secretly hoped it would. Jaws is what gave me my lifelong fascination of the great white (and why I eventually did the shark tank thing in Hawaii - it was amazing! No great whites though...).

Strangely, this movie came on here on the night you posted this blog. I only caught the second half, but if this movie is on anywhere NEAR me, I'll find it and watch it every time. I do believe it is the greatest film ever made.

Personally, Jaws 2 is my favorite sequel (and my most watched of all the Jaws films, including the original)... it's a slasher film where the shark is Jason - how could I not love it?!? I sometimes like the Revenge depending on my mood and I've come to love part 3 even if they should have stuck with the original title Jaws 3 People 0...

We have so much in common, it's weird. Like totally!