I’ve steered clear of Nick Palumbo’s Murder-Set-Pieces for most of this year (which isn’t actually difficult due to the fact that the film is banned in Britain). One reason for my lack of enthusiasm was the amount of explicit sexual violence I’d heard it contained, as well as graphically depicted child-murder and, worst of all, bad acting. But I finally decided to give it a try recently. I figured that horror sometimes takes you to places you don’t want to go. In fact, that’s kind of the whole point. 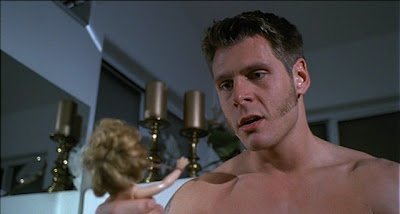 Inescapably then, M-S-P (pronounced “musp”) does contain some pretty horrific stuff along the abovementioned lines, ranging from mid-sex throat-slashing to the onscreen knifing of a little girl in a public toilet. There’s also an anti-Semitic quote from Jack the Ripper to kick things off, and a dream sequence consisting of amateur film of the World Trade Center attacks. At one point, the bottom of the glass I was drinking from actually fell out, presumably in shock, unexpectedly drenching me in margherita mix. (Yes, this really did happen. I’ll show you the sofa stains if you don’t believe me, whilst vociferously denying they’re anything else.)

Although M-S-P is nasty, however, I’m surprised to report that I didn’t think it went too far. Perhaps I’m jaded, or perhaps it has just enough plot to keep everything within the boundaries of a decent horror/thriller – because that’s how I came away thinking about it. Murder-Set-Pieces isn’t exactly restrained, and neither is it what you’d call high art, but it does have something to say and – I can’t believe I’m writing this – it made me think.

M-S-P is a low-budget look at the life of a Las Vegas serial killer – a seriously sick and prolific serial killer. So prolific, in fact, it’s a good job that the film largely ignores the law angle because the police investigation alone would take up a whole series of CSI. As well as his various exploits, we follow his relationship with a young hairdresser and her even younger sister (we’re talking eleven years old here, and if you thought the terrorization of preteens in the Friday the 13th franchise was tasteless, you really ain’t seen nuthin’ yet). 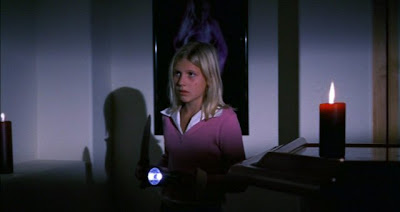 Now I’m not going to claim that it’s a particularly cerebral affair (it does show some brains – mainly in the scene where a woman’s head is chainsawed in half) but it’s provocative in a reasonably intelligent way. The “sex industry treats women as meat” argument may be nothing new, but the way it’s addressed here is pretty powerful. In any case, never before has it seemed such a small step from leering over naked flesh in a sleazy strip joint to carving said flesh in a maggoty basement. Similarly challenging is M-S-P’s matter-of-fact representation of dead kiddies; somehow it’s fine to see children painted up as corpses for Halloween (as they’re shown in M-S-P at one point) but to have them made up as corpses for a horror film – that’s still a bit taboo. Albeit not one that’s observed here.

Beyond the shock value, the sadism, the blatant attempts to disgust, does Murder-Set-Pieces work as a horror film? I think it does, and nowhere more so than during its deliberately self-conscious climax – a set piece to rival any traditional slasher movie finale, involving a final girl who really is a girl, buckets of blood, and some construction tools being used in ways you won’t see in a home makeover show. If you’ll cast your mind back to that other over-the-top Vegas “exposé”, Showgirls, you might see a comparison between that outrageous film’s relationship to the more responsible melodramas that inspired it and what M-S-P represents to the currently fashionable torture-porn genre: namely, a very bloody nail hammered haphazardly – but effectively – into a coffin. 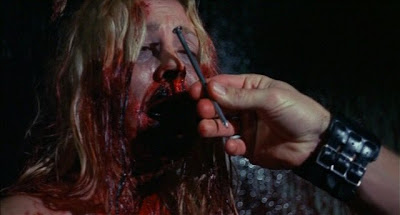 I really like this movie. I just do. And strangely enough, until now, I've only encountered women who also enjoyed it. I have a few ideas why...

First of all, I'll give a mini synopsis of what I think the film is about. I do not think what we are seeing is what is actually happening. I think we are seeing the fantasies of a killer who embellishes even to himself when it comes to remembering what he did to those women. I also think that's why the cops never come into play. This is all from his POV and it's a fantasy (ala American Psycho without any humor).

What I was drawn to, as a woman, was how these women just kind of ended up with this man. He was very good looking but exuding nothing that even resembled a personality. This is the part that disturbed me, because I know (myself included) women will let their guard down with an attractive man. It's our weakness, and Palumbo aptly displays it here. I think I might act the same way (I'm thinking of the girl he picked up in the casino, and not one of the strippers because you know, I'm not a stripper! Thank god!). I also think that's why the final girl was an eleven year old. She had not yet awakened to sexuality and therefore she could see him for what he was, and not how good he looked.

As a final point, I grew up in Las Vegas and MSP is one of the few films that actually captured the city the way I saw it as a local... not a tourist. There's a scene where the little girl is standing in the desert and a wind blows around her. At that point, I completely remembered the hot winds that blew through the valley and it felt like home. Palumbo did an AMAZING job at showing the city the way it really is.

I've actually met the director and discussed these points with him. He's actually a really nice guy and I'm not sure he agreed with everything I said, but he actually listened to me, which is so nice.

I kind of want to see Nutbag! I'm weird!

Thanks for the review – and Amanda by Night's comments are very interesting too, as I too am a woman. The fact that it's banned in Britain is interesting, as I'm English and I can order the US version form Amazon (I have a region-free DVD so that's not a problem) and have it delivered to my door! Take THAT establishment!
Seriously though, it's a film I've looked at and shied away from, mostly because the cover looks crap and the title makes it sound like a Saw-type thing (which I hated).
So cheers – I'm gonna check it out!